Christy Lefteri on "The Beekeeper of Aleppo" 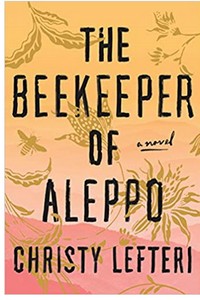 When I would hear of Aleppo, the image it conjured is the now-iconic photo of a stunned and bloodied child sitting in an ambulance--collateral damage in Syria’s ongoing civil war. In the U.S. this conflict seemed so remote, but that image brought it close and engendered empathy for the plight of the people there. That’s what Christy Lefteri’s novel The Beekeeper of Aleppo does as well, a heart-wrenching story that humanizes the immigration debate by illuminating the sorts of desperate circumstances that compel people to flee their home countries or face a violent, and likely deadly, end. When the novel begins, ordinary Syrian couple Nuri and Afra’s son has been killed, Afra is blinded, and Nuri’s beloved apiary has been destroyed. Increasingly imperiled, they set out on a treacherous trek to the UK by way of Turkey and Greece—a journey that will test their already fractured relationship, and their faith in the world. Lefteri is the daughter of refugees and volunteered at a center for the displaced in Athens. Here, she describes that experience, and how it permeates the pages of this profound story.

In the summer of 2016 and 2017, I decided to volunteer at a UNICEF supported refugee centre in central Athens. The experience of being there for people, during the most horrific circumstances of their lives, opened my eyes, it moved me to tears and emotional exhaustion. Every day, new people flooded into Greece, families, lost and afraid, mostly from Syria and Afghanistan.

The Hope Centre, just off Victoria Square, was a place of safety for women and children. There was a play area, showers, a sofa where new mothers could nurse their babies. We served tea and biscuits; this was often all that people would eat all day. Each day, about a hundred refugees would flood in from the camps.

We had an area for new mothers. One woman came in with a tiny baby, barely moving. She was so distraught that she couldn’t produce milk. We were frightened that the baby would die. All we could do was nurture the mother, give her food, sit with her, hold the baby when she needed a rest. We tried to give the baby formula but he would not feed. In these situations, you learn to care about the people you are helping, to try desperately to make things just a little better for them. As the mother grew stronger and felt safer, she began to produce milk. The baby started to feed, and his eyes opened to the world.

The children changed as the days went by, they learnt to play again when they realised that they were safe enough. The women formed friendships at the centre. I think this was their way out of the darkness, I could see it so clearly in the way they laughed and cried together, how they shared photographs of the homes and people they had lost.
It reminded me of my own family. My parents came to London as refugees during the invasion of Cyprus in 1974, they had lost their homes and everything they had ever known. Growing up, I could feel the war in my parents’ hearts. From an early age, I learnt about the devastation and loss that war can bring.

During my time in Athens I was able to see how people dealt with their traumas differently.  One woman drew her memories with charcoal, beautiful sketches of people and places that she had known. A group put together a theatre performance in the courtyard of the school, a chronicle of their journeys from Syria. They had managed to come together as individuals with their own stories and piece them together in the form of a moving and beautiful play. I remember taking a photograph of the faces of the people in the audience, and I look at this picture sometimes when I want to remember the power and importance of coming together at such difficult times.

The refugees were trying to survive in this unknown city, thinking about where their next meal would come from, how they would clothe and feed their children. At the centre, when I played with the children, I wondered what would happen to them. Where will they end up? Will they ever find security and safety and acceptance?