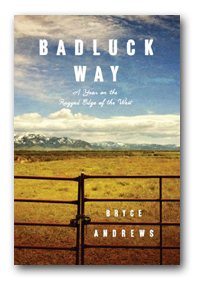 “Mine might have been a simple, pretty story, if not for the wolves. In late July, they emerged from the foothills....”

Born in Seattle, Bryce Andrews went to Montana's Sun Ranch, at the edge of Yellowstone, looking for wild country, hard work, and the space to figure out what's next. He found the first two, quickly mastering the difficult and occasionally monotonous work of a ranch hand. Things got interesting, however, when a pack of wolves harrows the herd, picking off heads of cattle, and Andrews is compelled to explore the intersection of his conservation-minded ideals and the economic realities of those who make their living from--and inhabit--the land.

Andrews's memoir, Badluck Way, is a timely, artistic accomplishment. His considered-yet-unforced prose evinces the vastness of this piece of the American West, as well as the pace of a rancher's daily existence, where time seems to settle across the open landscape. He aims high for the traditon of writers such as Stegner and Kittredge, and if he doesn't quite achieve those heights with this book, he may very well with another down the line. And it comes at a time when the debate over delisting wolves as an endangered species (and the ensuing "population management") has stirred the interests and emotions of conservationists and land use advocates alike. Andrews understands the tension and its complexity.

Andrews answers our questions about his experience on the ranch and the new book, an Amazon Editors' pick for January in Biographies & Memoirs.

What was the moment when you decided that you wanted to write this book? Was it a larger (or more difficult) project than you imagined?

I started Badluck Way while wintering alone in a small log house on the Sun Ranch. Back then I didn’t think of it as a book. Pushed indoors by the deep, unyielding cold and long nights, I wrote to make sense of my first year as a ranch hand—particularly the difficult bit with the wolves.

Getting the book done and published took six additional years. Yes, it was absolutely a larger and more difficult project than I expected.

One of the central conflicts in the book revolves around the reintroduction of wolves and the toll they take on the ranch and livestock. How would you justify the intentional presence of predators to a cattleman, whose animals and income are at stake? Or would you at all?

I wouldn’t try to talk a traditional rancher into loving wolves. Life’s too short to spend time barking up that tree. No matter how you slice it, ranchers have been forced to shoulder an inequitable share of the burden of reintroduction, while reaping very few benefits. For that reason, I’d also balk at trying to sell him or her on the essential role that wolves play in a wild ecosystem.

Instead, I’d try to show him how much wolves and other wild creatures mean to millions of people living within and beyond the high and rugged valleys of Southwest Montana. These people—some of them, at least—are the ones who buy his or her beef in supermarkets. Just as importantly, they are the ones who fund and direct the work of conservation groups across the West.

I’d hope that even the most stubborn rancher could dredge up some respect for people who oppose irresponsible development and the wholesale depletion of the West’s resources. Such people—I’d say to our dubious rancher—care as deeply for wolves, bears, and other wild creatures as you do for your herds. And here’s the most important part: these recreationists, hunters, and environmentalists are a rancher’s most stalwart allies in preserving the open landscapes essential to wild animals and livestock. 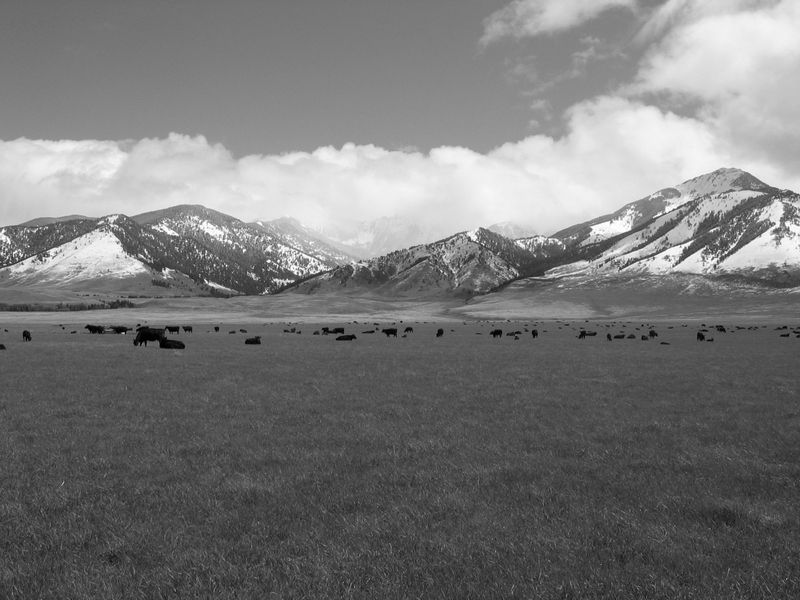 Even during your one year at Sun Ranch, you could see development encroaching at the borders and even inside the land. How should preservation and development be balanced, if at all? What is the future of wild lands, and why should we care?

I’m certain of very few things these days, but ranching on the ragged edge of man’s range has taught me this: though a farmer or rancher may make poor choices in his or her stewardship of the land, the consequences of such decisions pale in comparison to the threat of development.

For far too long, our recipe for occupying the West has read as follows: Find a wide-skied paradise and fall in love with it. Chop that beautiful, intact, arid landscape into twenty-acre parcels. Fence these, then pimple the hills and benches with modular homes, trailers, and cookie-cutter starter mansions. Pull wire, lay pipe and cut roads as necessary, until the wild expanses we love are trussed up in a net of utilities. When all is said and done, stand on the front porch after twilight, grouse about the yard lights of the neighbors, and remember better days.

This much seems clear to me: Wolves and cattle can, and do, coexist in many our last remote and wild landscapes. It’s not a bloodless peace, and it likely never will be, but it works. The ranchers press on, the wolves keep breeding, and every new spring offers us a chance to avoid the pitfalls of the past. The fragmentation of a landscape, by development or any other means, brings this process of experimentation to a screeching, final halt.

Places like Montana’s Upper Madison are few and far between. Agriculture, when practiced responsibly, can exist in such valleys without destroying the surrounding wilderness. The same cannot be said of dense human inhabitation. So long as the land stays open and sparsely peopled, we reserve the right to pursue a brighter future.

Wranglers are good for work, especially work on horseback, because of the placement of the seams and the tough weave of the denim. Wranglers last twice as long as other jeans. Unfortunately, a solid half of that lifespan is required to break them in and dull their weird, ultramarine hue.

In short: Wranglers for work, Levi’s for everything else. 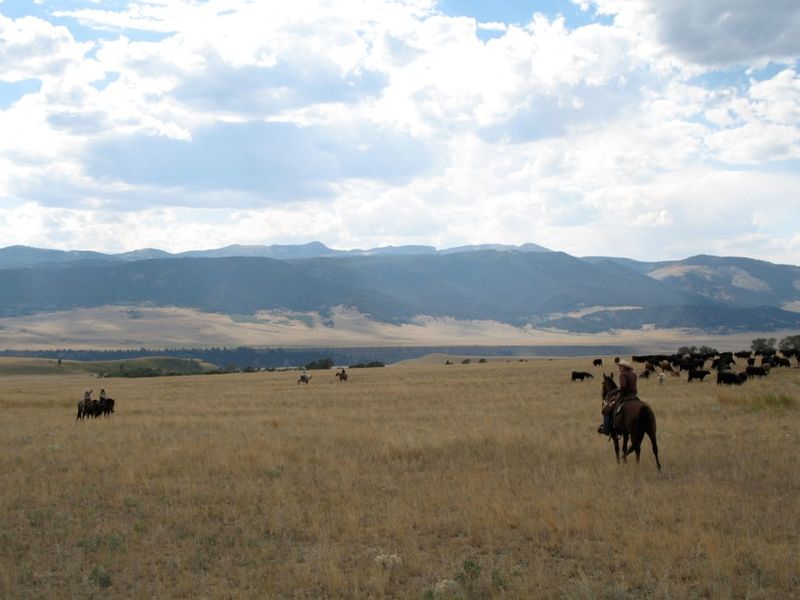 What other gear is essential? 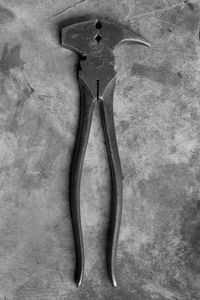 For the most part, a ranch hand requires a small and relatively simple toolkit. Pliers and a wire stretcher are essential, as are a good shovel and a rock bar. My chainsaw sees considerable use, too. A horse is necessary—a good, calm horse with sound conformation and hooves that offer little trouble. The horse’s color doesn’t matter, but I’ve had good luck with bays. Saddle and rope are essential, too, though the rope comes into play less often than one might imagine. At least once or twice a year, a simple, durable rifle proves indispensible.

There are other, larger things, too—backhoes, tractors, trucks, ATV’s, trailers and the like—but they generally belong to the ranch, rather than to the ranch hand.

What are the books (or writers) that made you want to become a writer yourself?

From its outset, my desire to write has been nurtured by great teachers, particularly Don Snow of Whitman College and Phil Condon of the University of Montana.

That said, I admire many writers. Here are some, but not all of them, in no particular order. Aldo Leopold, Mark Twain, Gary Snyder, Terry Tempest Williams, Paul Theroux, Antoine de Saint-Exupery, Paul Shepard, Richard Hugo, Bruce Chatwin, Loren Eiseley, and Maurice Sendak.

What do you hope readers take away from the book?

I hope that they take from the book something similar to what I took from the Sun Ranch—a deep appreciation for the work of ranching and an equivalent sympathy for wild animals like the wolf.

What was your scariest wilderness experience?

While crossing alone through a deep and claustrophobic bog, my horse plunged headlong into a sinkhole full of mud, deadfall and standing water. One moment I was riding without a care in the world, and then we were in the mire. The horse thrashed madly to get free, threatening to crush me or lay himself open in the process.

The worst of it was getting out. I had to go ahead of the horse, leaping from one little patch of solid ground to the next, and then tugging at the reins to bring him along. The horse was terrified, and therefore dangerous. As he jumped wide-eyed from hummock to hummock, hurdling downed trees and landing close behind me, we played a high-stakes game of follow the leader.

At best, I stayed half a step in front of him. Once, when I hesitated for a beat too long before bounding out of the way, his hooves clipped down along my heel, missing flesh by fractions of an inch and slicing a wide half-circle of rubber from the back of my boot.

What advice would you give to an aspiring ranch hand?

Work hard. Preserve a gentleness of spirit. Cultivate the quality of gumption. Notice when the light falls beautifully across the land. 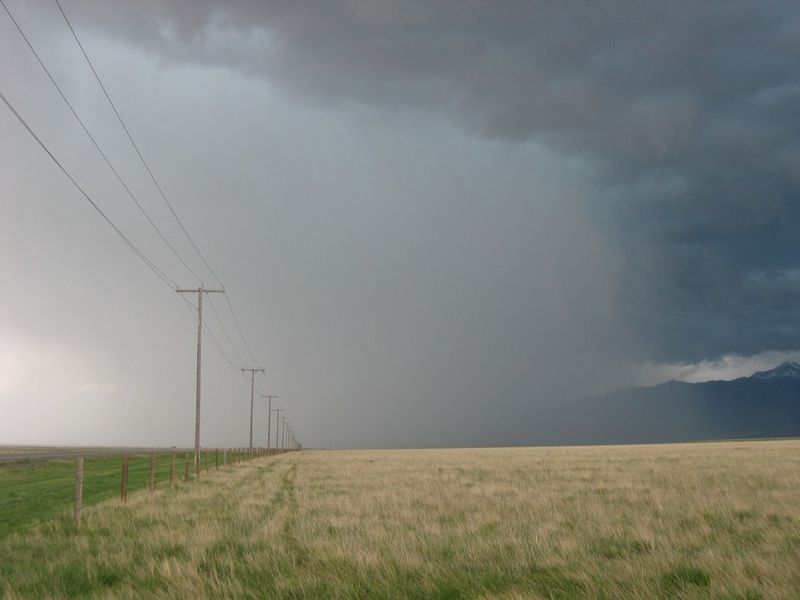