Etaf Rum on "A Woman Is No Man" 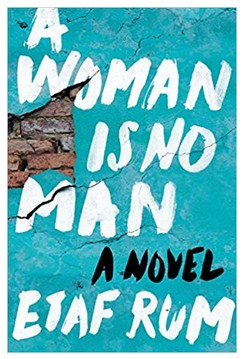 Newlywed Isra thought life would be different when she immigrated to America from Palestine, but her dreams were quickly dashed. You’ll need to steel yourself the more you delve into Etaf Rum's penetrating debut novel A Woman Is No Man, which follows Isra’s journey, and that of her daughter Deya. The clash between dual cultures creates much of the drama, as Deya tries to do what her mother ultimately couldn’t--break free from their family’s violent, misogynistic past and forge her own path in life. While A Woman Is No Man is a rallying cry to resist patriarchal strictures designed to keep women in ‘their place,’ it is also a love letter to books and their transformative power. Reading was one of the only comforts, and acts of rebellion, that Isra enjoyed, and she had a particular affinity for literary heroine Scheherazade: “For a thousand and one nights [her] stories were resistance. Her voice was a weapon—a reminder of the extraordinary power of stories, and even more, the strength of a single woman.” They say write what you know, and while A Woman Is No Man is not autobiographical, the themes within it are something Etaf Rum is intimately familiar with. Here, she talks about how books broke her world open.

As a first generation Arab-American woman raised in a very sheltered and conservative household in Brooklyn, I grew up feeling quite isolated. Because I often felt unseen in my community, I found myself resorting to books to help me connect to the outside world. They were the bridge that took me out of our two-bedroom apartment in Brooklyn and around the globe.

From a young age, I read everything I could get my hands on, seeking out connection and understanding through stories. Since my own story as an Arab-American woman was seldom represented in books and literature, I found myself surprised by how seen I felt in unlikely narratives. This sense of connection not only helped ease my feelings of loneliness and displacement, but it also allowed me to see the world through a more inclusive lens and helped me understand my place in it.

As a woman in an insular, patriarchal community, I was raised on fear, shame, silence, and obedience. As a result, I often felt voiceless and afraid to speak up, even when I knew I should. Whenever I witnessed injustices occurring around me, I curled up inside of a book in attempt to make sense of them. On the rare occasions I did manage to speak up---Why is marriage a woman’s only aspiration? Why are only men encouraged to go to college? Why is it okay for a man to lose his virginity before marriage but not a woman? Why is it okay for a man to beat his wife? Why are women expected to endure these injustices in silence?---I always heard the same answer: because a woman is not a man.

After many years of being silenced and afraid, books are what helped me build the courage to speak up against these injustices and tell the stories of the women in my debut novel, A Woman Is No Man, who live in the same insular community where I grew up. If it weren’t for books, there would have been no way for me to truly understand the toxicity of this community or the reality of my life.

It was only through books and stories—which allowed me to educate myself not only intellectually, but mentally and emotionally—that I was able to make the connection between the life that I was living, with all its limitations, and the endless possibilities of what my life could be like if I broke free of the narrative that had been written for me. And that’s the power that books and stories have had on my life—not only have they given me a sense of connection and allowed me to understand my narrative in the world, they have helped me build the strength and courage to rewrite it.