I first met Ngozi Ukazu at Emerald City Comic Con last year and her enthusiasm to be attending as an author was infectious. Ukazu is an excellent example of where graphic novels are going these days--it's a genre rapidly filling with smart, interesting, young women writing in, and loving, this format.

*Check, Please!:#Hockey is one of our editors' picks for the best young adult books of September

What inspired you to write Check, Please!? 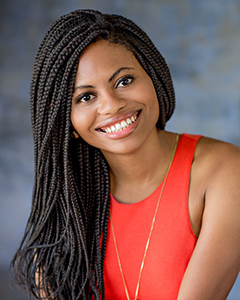 During my senior year at Yale University, I wrote a full-length screenplay about men's college ice hockey. The thing is, I'm originally from Houston, Texas and knew absolutely nothing about the sport at the time--so I had to completely submerge myself in research in order for the screenplay to read authentic. And after all of my studying and investigation, I ended up getting wildly obsessed with the game--with the history of hockey, with following the NHL playoffs, with all of hockey's crazy traditions and idiosyncrasies. The summer before I started graduate school, where I was to study comics, I decided to channel my new obsession into a story--and launched Check, Please! as a webcomic on Tumblr.

How did you go from Check Please!, the webcomic, to working with First Second books?

I continued posting Check, Please! to Tumblr and the readership continued to grow. In 2014, I started creating small prints and zines about Check Please!, and in 2015 launched my first Kickstarter—it was funded in under an hour. But it wasn't until my next Kickstarter in 2016, which raised nearly $400,000, that publishers started to take notice of Check, Please!'s readership. This is how First Second came into the picture with the idea to raise the platform of the webcomic and to put Check, Please! in bookstores. Drawing and telling stories has been a dream of minesince I was a kid, and knowing that my work would be in bookstores is a hard feeling to describe. My initial reaction was excitement!

How has your experience been as a first-time author?
It's been a whirlwind! I come from the world of webcomics; when I publish Check, Please! online, I'm used to the reaction being tweets, comments, and memes. Now that Check Please is being traditionally published, it's reaching an entirely different audience and I'm meeting brand new readers. While on the road promoting #Hockey, I get to run into—librarians, teachers, book people, and even parents. An extremely different crowd from the teens and 20-somethings who found Check Please! through Tumblr.

What's your favorite thing about attending comic cons and similar shows?
My favorite thing is hands down, meeting and chatting with readers! They're always so enthusiastic! And it's nice to meet the people who click and comment and share the comic in real life, to place usernames with faces. I also get tremendous pleasure when I get to sign books, usually drawing a character from Check Please! on the title page.

Is there a particular comic con that’s your favorite and if so, what makes it special for you?
The Toronto Comic Arts Festival is a great trip and convention! Other than the fact that the convention is in Canada—and Canadians have a thing for hockey comics—I enjoy how TCAF finds that perfect vibe of being a small indie convention on a big scale. The volunteers are famously helpful, and the crowds are excited (because it's free to attend!) and conventions like TCAF always feel a bit like summer camp. It's good to meet up with comics friends from all over the continent.

Do you always draw the same characters the same way, or do you have a method for deciding how to portray a character in different scenes?
Drawing comics is drawing acting. Even though the character designs may not vary much from panel to panel, the context of the dialogue and the specifics of an interaction change how I draw facial expressions and gestures. You're watching a movie in your mind and translating the actors' movements into illustrations.


Do you fangirl over other graphic novelists? Which ones?
Right now, I'm a huge fan of Boku No Hero Academia, also known as My Hero Academia in English. It is the best superhero story currently being written. I'm a big fan of Gale Galligan, who's currently writing the massively popular Baby-Sitter's Club series! We met in graduate school and her sketching and work ethic have been inspiring ever since. My favorite graphic novels of 2018 have been My Lesbian Experience with Loneliness and reading a webcomic called The Warmth Between Bugs in the Machine by Comilla Paddock.

Your author bio says that ‘90s sitcoms influenced the quirky family feel of the story—what sitcom(s) does that refer to?
The Simpsons, seasons 3 through 8, definitely had the greatest impact on my approach to humor, which I feel is generally lighthearted, genuine, character-based, and absurd. You'd have these episodes where Homer was a buffoon, but also genuinely trying his best to be a good dad. Or like those scenes where Lisa deals with really hard topics like the death of Bleeding Gums Murphy, but the episode ends on a funny, warm and fuzzy note. I love that! But I grew up watching Frasier, I Love Lucy, Everybody Hates Chris, and a slew of programming on the now defunct UPN. I was in the 5th grade watching Ally McBeal.

What's next for you?
I'm working on a project with Madeline Rupert that involves girls softball, and I'm finishing up the last volume of Check Please at checkpleasecomic.com. And also, I'm brewing up some superhero stories that will be fresh and very fun.