Tim Murphy: The books that brought me to Baghdad 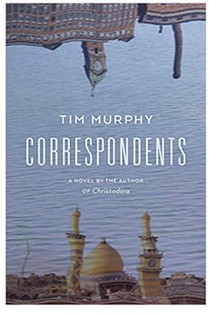 In Correspondents, the latest timely and thought-provoking novel by Tim Murphy, a cub reporter assigned to cover the America-led invasion of Baghdad in 2003 discovers that she and her interpreter are ill-prepared for the horrors they encounter there. Here, Murphy explains how he brought that tumultuous time and place to life.

How could I write an entire third of a novel set in Baghdad prior to and during the American invasion of 2003 without ever having been there--and with Iraqi friends now in the U.S. telling me that it was still far too dangerous for me to go there alone, even in the slim chance I could get a visa in advance? (I love the Middle East and if I could have gone safely, I would have in a heartbeat.) If I'd been planning to write an entire novel set there, I probably would have given up, but I hoped that if I immersed myself in a mountain of research--including interviewing Iraqis who had left the country, then paying them to read my pages--I just might be able to pull it off. I guess whether I did is for informed readers to decide. Regardless, one of the gratifications of writing Correspondents was reading literally dozens of books about Iraq, as many as I could get my hands on. Here are a few of my favorites (including one documentary):

Between Two Worlds: Escape from Tyranny: Growing Up in the Shadow of Saddam by Zainab Salbi

Salbi is now one of the world's most prominent advocates for women's rights, but in this riveting memoir, she recounts growing up in Baghdad in the 1970s and 1980s in a family that Saddam Hussein hand-picked to be among his inner circle. That meant a terrifying, tense experience coming of age in a gilded cage, pretending to love someone you despised and were deathly afraid of, turning a blind eye to atrocities to save your own life. Not until Salbi's parents sent her away to be married in the U.S. did she finally begin the improbable and moving journey of finding her own self and her own voice. This book gave me an incredibly up-close view of middle-class, educated Baghdad life in the Saddam years, which was invaluable in helping me paint the family life of one of my two protagonists, the interpreter Nabil al-Jumaili. This memoir has moments of incredible beauty and also contains an absolutely beautiful and heart-rending mother-daughter story. I listened to it mostly in the car on audio and was crying freely by the final pages.

Night Draws Near: Iraq's People in the Shadow of America's War by Anthony Shadid

I have such respect for the late Shadid, a Lebanese-American journalist like myself who mastered Arabic (far better than I), came to know the Middle East intimately and covered the American invasion and occupation of Iraq for The Washington Post. He wasn't "embedded" as a reporter, seeing things only (or primarily) from the American military's point of view, but was--like my journalist characters Nabil, his cousin Asmaa, Rita Khoury, bureau chief Rick Garza and a few others--covering things from the streets, privy to the incredibly complex and often traumatized and encrypted feelings that everyday Iraqis had about Saddam, about the invasion--indeed about themselves and one another. To me, this is one of only a few books in English that vividly depicts how completely the U.S.-led invasion destroyed for Iraqis daily life, which might not have been ideal under Saddam but was far from the vision of hell it became after the invasion in 2003. 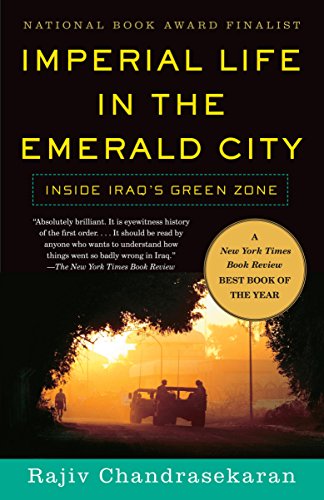 Imperial Life in the Emerald City by Rajiv Chandrasekaran

By the former Baghdad bureau chief of The Washington Post, this is the ultimate picture of the surreal, hyper-securitized bubble, a city within a city, that the American military and government set up for itself inside the grounds of Saddam's Republican Palace in central Baghdad. All is chaos and death outside, but in the Green Zone, there's American fast food, ample air conditioning, a swimming pool, a disco--and a dangerous lack of connection to what's really going on in a newly occupied country. It's hard to read this book and not be knocked over the head with the sheer hubris and ignorance of American imperialism. It was an early book I read for Correspondents, before dozens more, and gave me the visual map I needed in my head to write a long chapter set partly in the Green Zone--as well as a robust dose of rage that drove my storytelling.

Homeland: Iraq Year Zero. One of the hardest things about writing about a place you've never been is not being able to see it, hear it or smell it with your own senses. I couldn't do anything about the smell--I was always asking Iraqis I talked to, including my amazing proofreader/factchecker Yasir Dhannoon, What does Baghdad smell like?--but I was constantly on YouTube, looking at every bit of video from Iraq I could find, including even banal things like driving around in cars. One of the best things I found was Iraqi-French filmmaker Abbas Fahdel's documentary he made about his family, half in the year before the invasion and half two weeks after. This doc absolutely wrecked me. I've read some criticism of Fahdel for allegedly putting his family, particularly his irrepressible nephew Haider, at risk by making the documentary. I'm not sure I have enough information to comment on that. But this was another work that really fueled my writing because it showed the sweetness of ordinary Iraqi family life, even under the stress of Saddam’s rule, that the U.S. completely destroyed after the invasion.