Lisa Jewell on her leap to the dark side 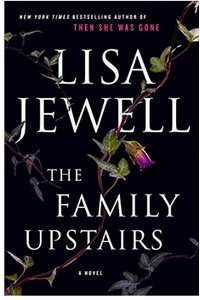 In Lisa Jewell's latest whodunit, The Family Upstairs, a woman's search for the truth about her birth parents takes a surprising (and sinister) turn...Readers familiar with the more menacing tomes in Jewell's oeuvre might be surprised to learn that she started off writing chick lit. Here she explains how she took the "leap to the dark side."

I started writing my first novel in 1995. I was 27 and I’d just come out of a dark, dark marriage to a controlling man who’d kept me more or less locked away from the world. I had no front door key, no phone, was not allowed to see my friends or my family. If I displeased him I was subjected to week-long silences and constant criticism. I finally broke away from the marriage early that same year and desperately wanted to purge the experience by writing about it. I was a few paragraphs into a fictionalised account of the events when I suddenly recoiled. I wasn’t ready. It was too personal. Too recent. Not yet, I thought, later.

So I started something else. Something completely different but equally dark. A story about obsessive love. A love triangle. A damaged man with a dark heart who takes the object of his desire prisoner hoping that she will learn to love him instead of his flatmate. My dark-hearted man was called Ralph. The object of his desire was called Jem. The flatmate was called Smith. The book was called Ralph’s Party and was described four years later in one review as "a breath of fresh air", in another as "a light delight sure to invite comparisons to Bridget Jones’ Diary".

Yes, my first novel was meant to be a psychological thriller, but somehow, under the subconscious direction of my fingers upon the keyboard it had become what was termed – annoyingly – at the time, Chick Lit. I’d written from my heart but my heart was clearly not ready to write darkly. I’d fallen in love with Ralph as I’d written him and I desperately wanted him to be happy. The house in which the story was set was far too nice to be the setting for any depravity and cruelty. In my own life I’d fallen in love with someone else, I had a great job and everything was virtually perfect. I’d lost sight of the darkness that had followed me out of my first marriage.

But then, you know, the flush of new love fades, you see the worst of each other, a baby comes, then another, then a long-term medical condition, then a parent dies and then another and one day you are 40, then you are 45 and you cannot possibly want to keep writing about adorable, spliff-smoking, flat-sharing lovers jumping on and off buses into Soho.

Shortly after I had my first child, I began my seventh book as I’d begun all my books, with a man meeting a woman. At first the man played an important part in my heroine’s story. He encouraged her in her search for the truth about her childhood, he helped her, he was important to her and their blossoming relationship was meant to be important to the reader too. But halfway though I realised he was utterly superfluous. My character could do this on her own. She should do this on her own.

And that was the moment I liberated myself from writing relationship novels.

There followed a tranche of novels about themes: sperm donation, hoarding, marriage in crisis, even a semi-historical novel set partly in 1919. And then I began to write my 12th novel, an exploration of the theme of multiple marriages, blended families and the terrible dynamics that can occur therein.

Halfway through I realized that for some reason the theme was not giving me enough to write about – so I decided to go back to the beginning and throw someone under the wheels of a night bus in suspicious circumstances.

I’d never killed anyone before. People had died, but they hadn’t been killed. Without really planning to, I’d finally made that last leap to the dark side. But sadly, I felt, not very successfully. I’d left too much residue from the original in there, it was too domestic to be a thriller and too thrilling to be domestic. The ending was a little vague and what should have been a whodunit had become a sort of whodunsomethingabitbadbutnothatbad. It was a bit of a pig’s ear.

Unlike a relationship novel where the happy ending is a prerequisite and it is just a matter of making the maze that your characters navigate to get to it as interesting as possible, the key with a thriller is not the journey, but the destination. A reader can race through 300 pages of a tautly written, adrenaline-inducing psychological thriller and if the last 20 pages don’t deliver, they are left feeling deflated. I was suddenly on a big learning curve, 15 years into my writing career.

But the important thing was that my editor liked this move away from the previous hard-to-publish themed novels, and so did my readers. I was so worried that my readers would desert me as I began to murder and abuse my characters, that they would be cross to be made to feel sad or scared or tense or shocked by one of their favourite feel-good writers. But I underestimated my readers. They weren’t only with me for the cute couples. Well, most of them weren’t. I have had the odd please-go-back-to-writing-Ralph’s-Party type of comment. But the thing is I never meant to write Ralph’s Party. I just did. It was there, waiting to be written. As were the books about sperm donors and hoarders. And all these very varied books were stepping stones on the way to the dark-hearted books I had wanted to write from the very beginning. Each book has brought me a tiny bit closer to finally taking that dark heart out of its box and showing it to my readers. It may look like bandwagon-jumping, but it really wasn’t.

There was never a masterplan...just a slow, occasionally painful, and ultimately inevitable evolution.