Behind the scenes with pop-up book master Robert Sabuda 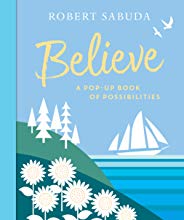 I've been a collector of Robert Sabuda's books ever since I saw the tornado pop-up from his The Wonderful Wizard of Oz: A Commemorative Pop-Up Book featured on the Today Show several years ago. Sabuda's paper work and creativity is, to me, unrivaled, and I'm always thrilled to learn that a new book is on the way.

Earlier this year I had the chance to meet Sabuda in New York and he showed us an amazing array of his work in all it's stages, including what he's working on now, an as yet untitled pop-up book coming out next year. Sabuda is so much fun to talk to; he's a whirlwind of energy and enthusiasm for what he does and was happy to take us behind the scenes of his paper magic. 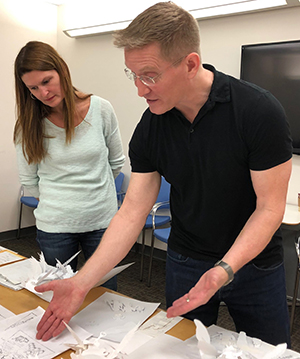 Sabuda's most recent creation--Believe: A Pop-Up Book of Possibilities--is stunning. It's about possibility and wonder, from sailboats to a rocket ship. The inspiration for this particular book? Sabuda told us, "I feel like life is full of ups and downs that are just so unbelievable, and a lot of friends and family, people in my life, talk about that, and I sort of thought, you’re not alone."

Sabuda said there is no mathematical equation to creating his pop-ups (this makes his interns crazy, he confided), he just has a three-dimensional eye for things and figures out how to get the action he wants with trial, error, and a whole lot of experience.

We spent over an hour talking to Sabuda and checking out all the cool stuff he brought for us to see, and I wish I could include it all here. But, of course, I can't so I'll focus on a couple of highlights:

Below is a look at how Sabuda gets started on creating his pop-ups. His equipment is simple but the result is complex.  Here you'll see the initial illustrations for the next book he's working on, a companion to Believe. After Sabuda creates a new pop-up, and everything works as desired, he numbers each piece of it, then takes it apart, scans each piece, maybe enlarges it, then puts it back together. He told us there's a lot of that, taking apart and putting back together, and some of the more complicated pop-ups may take a month to perfect--just for one page spread.

Seira Wilson: How do you know that what you've illustrated on paper is going to work as a three-dimensional pop-up?

Robert Sabuda: I’m able to see a world in three dimensions that I’ve discovered most people aren’t able to see. That helps me tremendously. A pop-up is kind of a performance, when you open it it’s kind of a stage moment.  From sketches I say, what’s the important thing I want to have happen? That will help me decide what the mechanisms are and how they’re going to work. 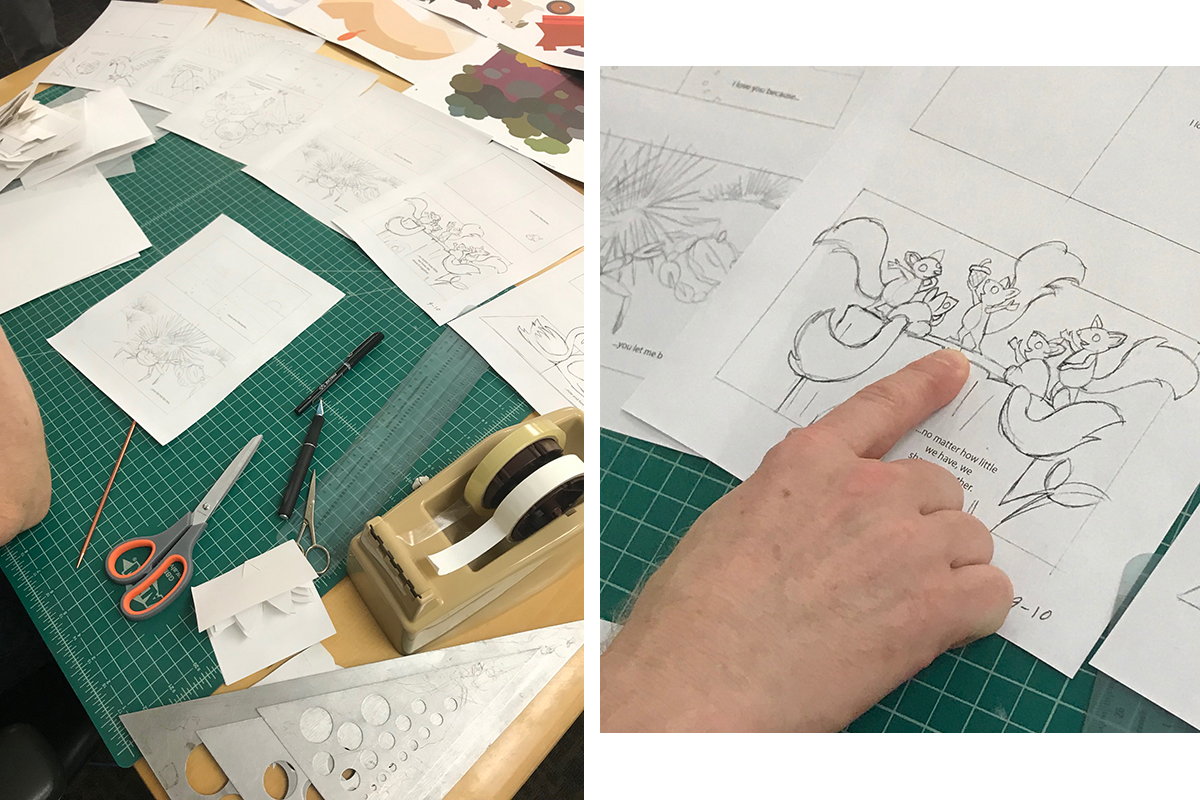 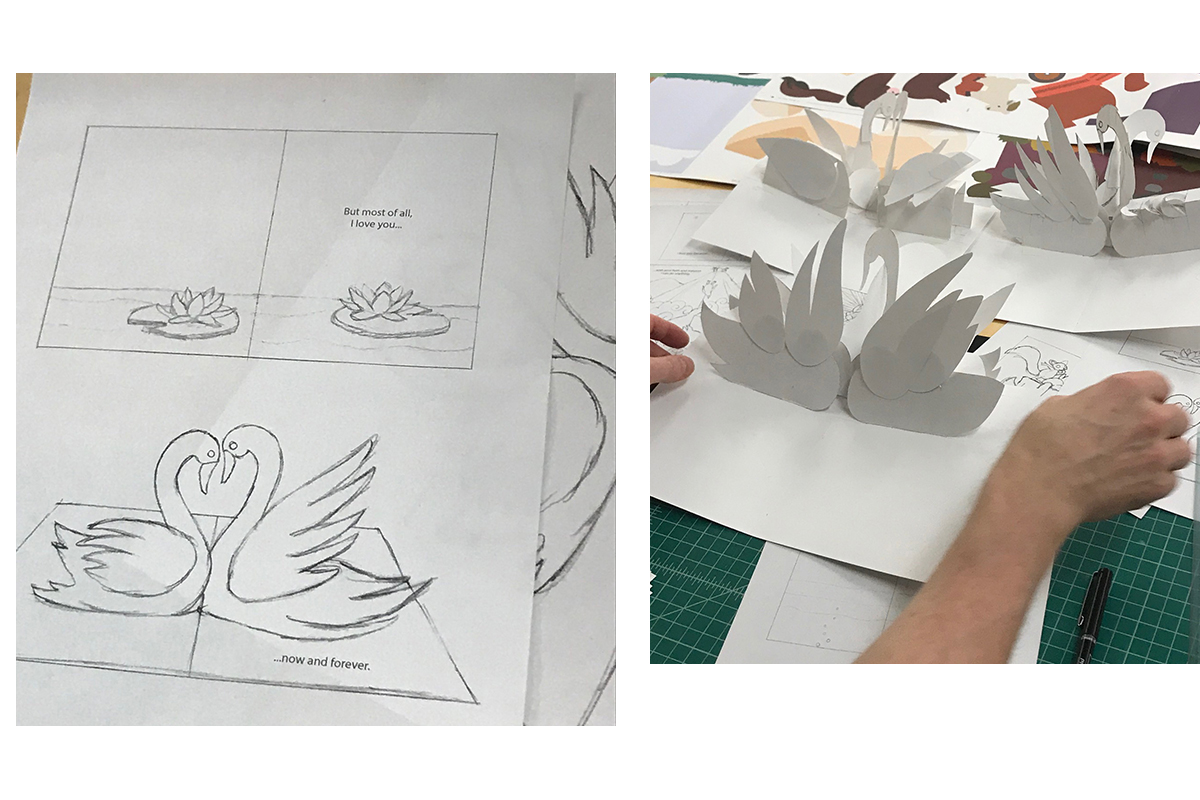 A couple of years ago Sabuda released a holiday-themed book, The Christmas Story.  This one harkens back to his very first publication, a pop-up Christmas alphabet book, that was all in white.  For The Christmas Story the six scenes depicting the Nativity all have white paper pop-ups with elegant touches of gold and pearlescent foil.  In the images below you'll see how this book was built, from first sketches to the final beautiful book.

Robert Sabuda: So in The Christmas Story, this sketch is the three angels and the shepherds, and the sheep.  I know I want the shepherds to kneel, so how do you get from 2-D to 3-D? What mechanisms do I need to make that happen when you open the page.  It's a slow process. For this particular pop-up, from the shepherds to the angels, you've got to get the sheep in there, it probably took a month.  There were probably 6-8 iterations.  There’s a lot of pull, a lot of back and forth; the paper is required to do lots of things.  So even though it's three-dimensional, it's really four-dimensional, because there's a second and a half when it opens and a lot of things can happen in that time period.

In the second photo here, there's a small pop-up in progress of one of the shepherds.  That's what Sabuda calls "the crappy stage" because it's really rough, but it's necessary. At this point, Sabuda said, nothing is precious; it's okay if it's kind of sloppy at this stage, because it just has to work. The rest of the refinement will come after. 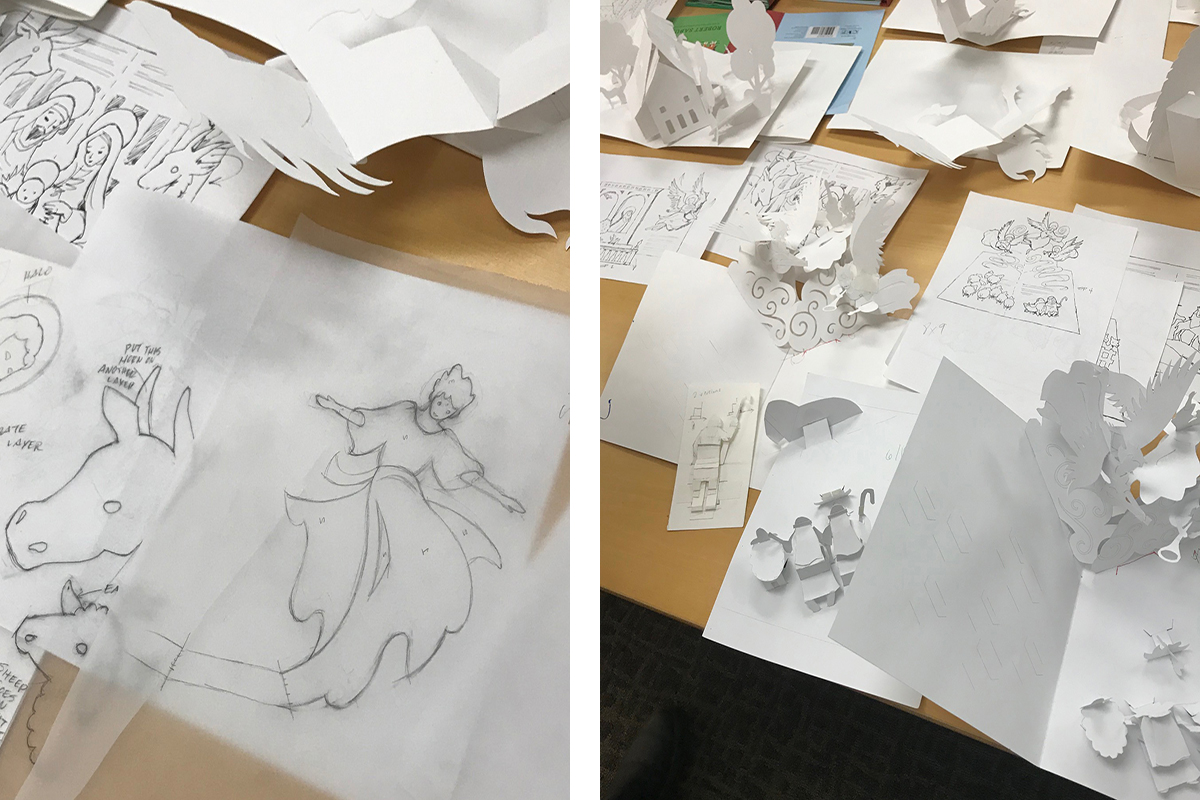 The pop-ups are working, and now there's notes added about placements, where the gold will be added, so many details go into every page. Then a couple of the final spreads from The Christmas Story. So beautiful... 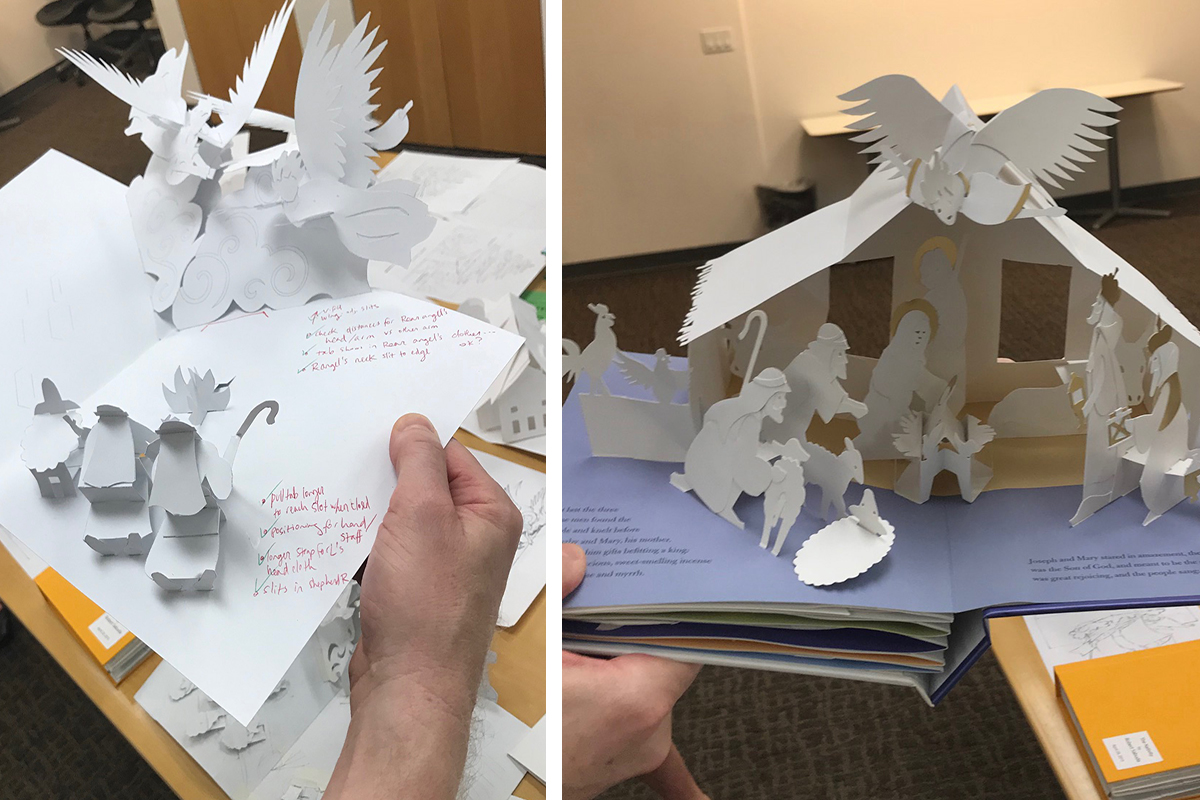 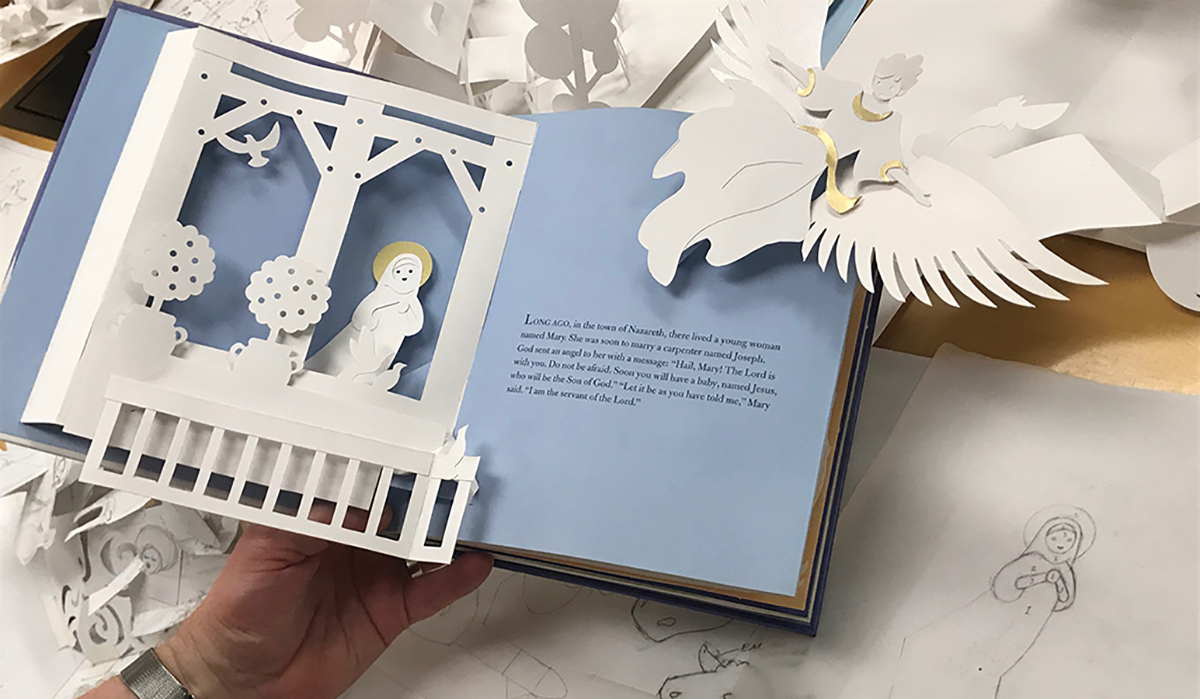 Last year, Sabuda gave us Ten Horse Farm, a pop-up book that came about in a rather unusual way: "I have a home in upstate New York and the property next door came up for sale, with a dilapidated horse farm on it, so I bought it, and crowd-funded to convert it into artist studio space.  And one of the perks for the crowd-funding was a pop-up book of the farm, which I loved the idea of creating. But I didn’t know anything about horses, so I had to learn a lot about them. This is a much broader book, each spread has a horse doing something in it, and I got a lot of information from my publisher, Candlewick, about different horses, how they move.  In Ten Horse Farm there’s also other little farm animals for kids to find.  This was a really fun book to make…"

The sheets you see here will become a single book.  There are four of them, giant, and in bright rich color, every single element of the different pop-ups numbered to be assembled. It's pretty incredible to see this stage of the process and both Sabuda and his publisher are sticklers for detail and color. 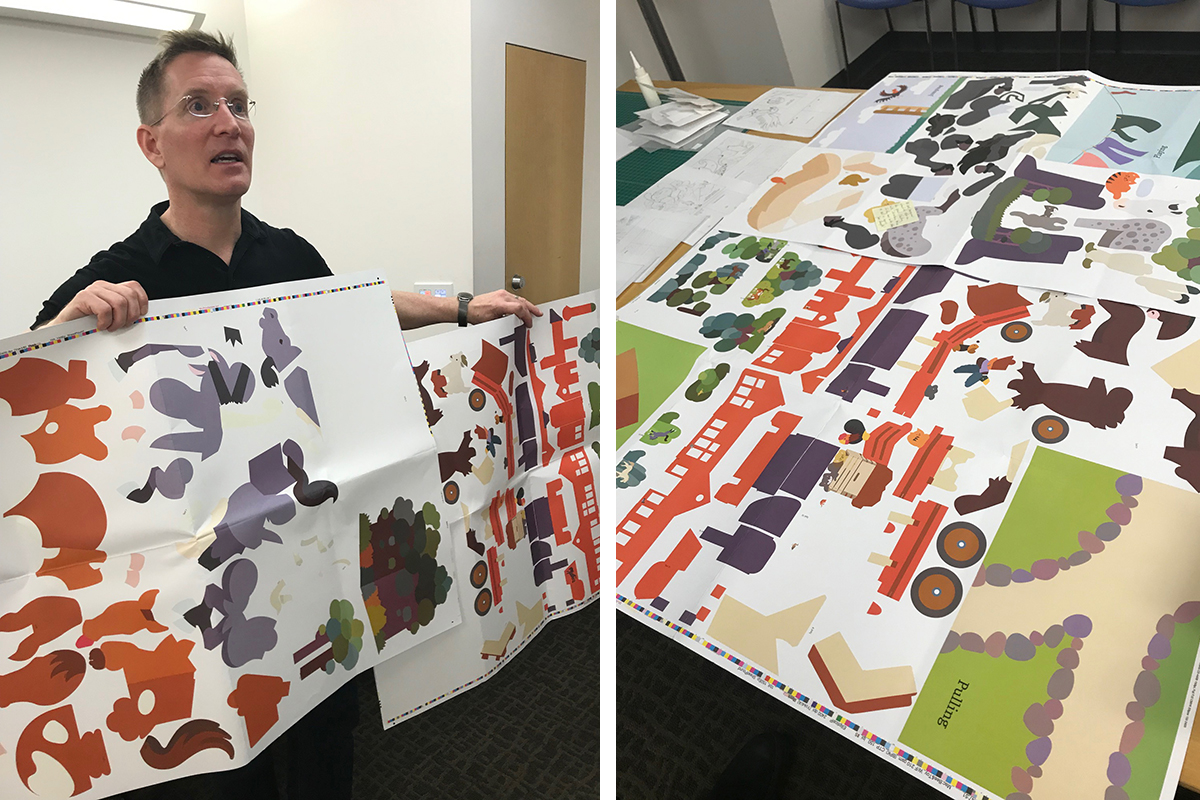 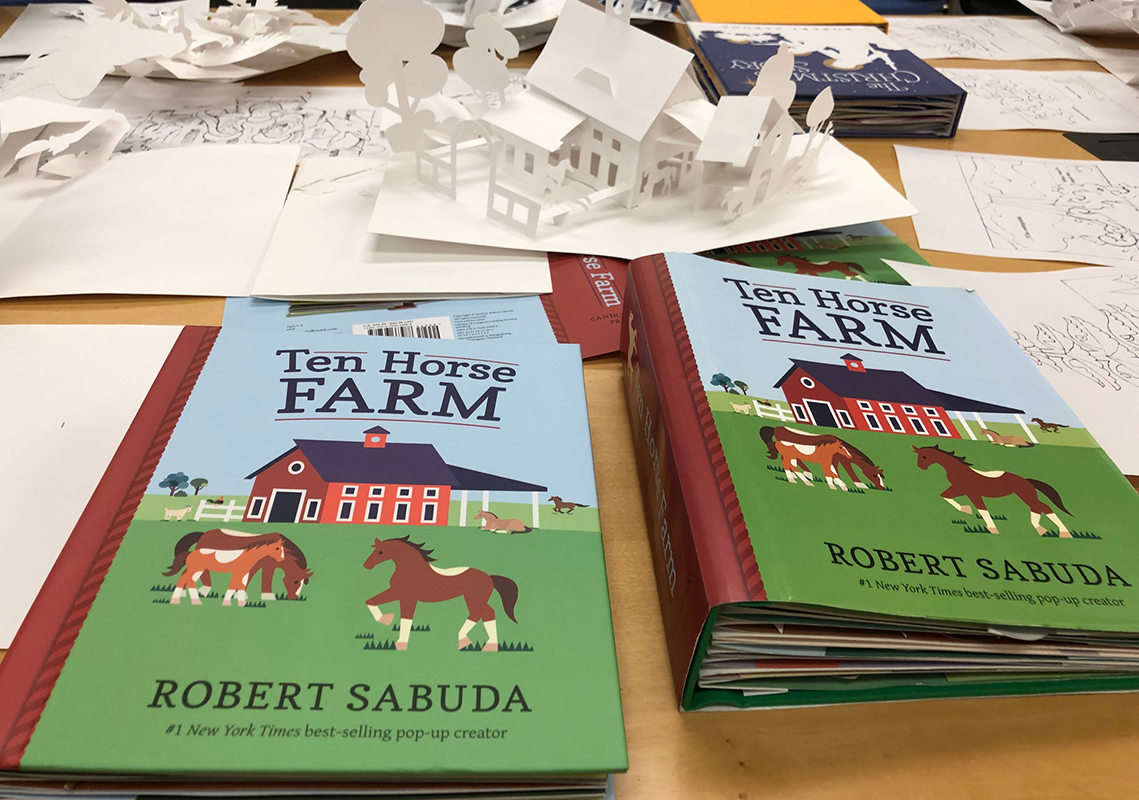 At one point while we were talking, Sabuda compared pop-up artists to magicians: so much is hidden, tucked away so the reader will never see the nuts and bolts but only the seamless result.  I couldn't agree more--that's the thrill of a pop-up, it's a surprise every single time. Now that I've seen some of what goes into creating one of Robert Sabuda's books, his attention to detail, and love for the craft, I think I'm even more impressed than ever before.  I can't wait to add another one to my collection...