Shot to Hilarity: Behind the Scenes of "Comic Genius" 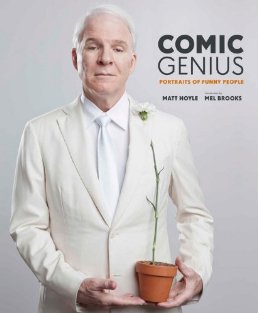 The cover seems safe enough: Good ol' Steve Martin comes off dapper and subdued, a gentleman we now know as much for his romantic comedy acting as his "wild and crazy" old King Tut days (if not more so). But with a single turn the mood becomes manic, a grid of small oddities begging for a closer look.

Award-winning photographer Matt Hoyle combined high hopes, dogged persistence, intuitively clever conceits, and inspired artistic execution to bring us to this point. And it all culminates in Comic Genius, a collection of more than 100 unique portraits of more than 80 name-brand comedians -- sprinkled with insightful one-liners and loaded with visual nuance.

But it started much smaller than that. Hoyle says he initially aimed for 20-30 comedians, setting out with his team to pitch the idea, presenting between five and ten concepts to each. Steve Martin, Neil Patrick Harris, and Jason Bateman were early participants. Then, as he explains in the book's author's note, things snowballed.

"Once we had Mel Brooks it was a little easier to get a response from others," he writes. "Once we had Kermit the Frog, no one wanted to be left out."

Brooks -- who also provided a wonderfully quirky, poignantly poetic introduction called "Comedy is like an egg" and, as you'll read below, strong opinions about his portrait concept -- and Kermie wound up in amazing company. The table of contents reads like a comedy hall of fame: Ricky Gervais, Martin Short, Sarah Silverman, Jim Carrey, Carol Burnett... Seeing if your favorite funny person is on the list is too easy; try figuring out what great living comedian isn't there if you want a real challenge.

"I got greedy and tried to get as many as I could to make it the biggest book of its kind," says Hoyle. Greed, in this case, benefits everyone; the fact is that this labor of love is one of best-intentions, as well.

"I had always wanted to do something that would benefit even in some small way another group of people so that I'm not just doing a vanity project that does limited good. I specifically thought about who could use laughter the most and one good answer to that was children." Hoyle's net proceeds are being donated to Save the Children.

We asked the man behind the lens to select a handful of images from the book and give us a little back story for them.

WARNING: Mel Brooks's reenactment from The Producers may be considered offensive to some.