Why John Scalzi's "The Consuming Fire" Isn't About Our World Today...but Maybe Kinda Is 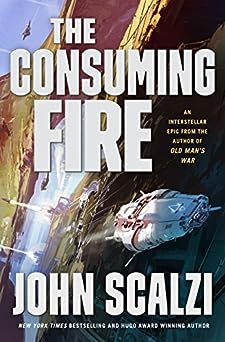 John Scalzi not only writes science fiction with a strong backbone of humor, he's a pretty funny guy in person. But as in his books, his humor heightens the serious thoughts he has about how we deal with our interconnected lives, our willful blindness to realities that don't suit us, and the state of science fiction writing today.

We sat down with John Scalzi to talk about the second book in his Interdependency series, funny ship names, the Old Man's War books, and what he's been reading and liking lately.

Adrian Liang: The Consuming Fire is the second book of the Interdependency series. Can you sketch out for me the setup for the series?

John Scalzi: Basically the idea is that there is a galaxy-spanning human civilization, and people get around from star system to star system by this thing called the Flow, which you can imagine like a river. [You] go into the Flow, the Flow carries you along, and eventually you exit the Flow just like you would do with a canoe. But just like a river, it will eventually change its course. The Flow is eventually shifting as well. The problem is that none of these systems is set up to survive on their own. That's why it's called the Interdependency. In the first book, [The Collapsing Empire], it is discovered that this [Flow collapse] is happening, and they're trying to figure out a way to let people know. In the second book, [The Consuming Fire], we find out that people are actually really resistant to the idea that change might be coming, especially if it messes with their business profits and their positions of power. It's been fun to write because it touches on a lot of things that I think are going on in the world today, but at the same time it's at enough of a remove that you can still actually enjoy it without thinking, Oh, this is really about the end of the world. And we're there!

In book two, we learn that the Interdependency had their own Brexit moment where, centuries before, they deliberately cut themselves off from Earth.

Writers are always writing about their times, because they're living in them. Even if you are not writing about them directly, the way you feel about the world that you live in is going to affect the way that you write. I keep telling people I wasn't building this story meaning to comment directly on, for example, climate change, but I live in a world where climate change is a fact and the world is changing, and there's resistance to [accepting the fact of climate change], and it's going to eventually screw us. So I'm not actually writing about Brexit, but there are going to be themes that are very similar that are going to pop up because I live in this world. I don't think it's a direct one-to-one [mirror of current events], but 50 years from now somebody will be able to read the Interdependency series and [say], Oh, yeah, that was written in that time frame, wasn't it?

Thinking back on The Consuming Fire, I don't remember your describing many people's physical characters, like hair color, eye color, or skin color. Was that deliberate?

Yeah, and for a couple of reasons. One, description bores me as a writer, so I don't tend to put it in unless it has relevance to the story that I'm telling. Otherwise, I'm perfectly happy to let other people imagine what the characters look like. But the other reason is I find [description] to be distracting from the story. There are people who love description, particularly in something like epic fantasy, where this goes on for pages and pages and pages about feasts and what people are wearing and stuff like that. And that's absolutely cool and fine. Some people dig that, and I want them to have that—but they shouldn't come to me for that. And that's one of the reasons why my books are not a quarter million words long. Now, the flip side of [little physical character description]—and this is something that's been made clear to me by friends who are minorities or are who are in marginalized groups—is that if you don't make it clear that not everybody is a white person, the default is that everybody's a white person. So I do make some effort with names and things like that to make it clear that everyone's not white. The emperox has a Chinese last name. With Kiva Lagos, you can presume that her family was Nigerian way back when. You put these sorts of things in so that people can pick them up if they want to pick them up, and if they don't, they don't.

The whole situation in the Interdependency is terrifying…

…The systems are going to be isolated from each other, without resources, and they're starting to realize exactly when this will happen.

But there's so much humor there as well. A bunch of people are smart-asses, and everybody's quipping at each other. Kiva Lagos, especially, is one of my favorite characters to read. Do you have a favorite character to write?

Well, I love Kiva. Kiva Lagos is possibly my favorite character ever. It's kind of a toss-up between her and Zoë Boutin Perry. When you talk about humor, no matter what the situation is, people are going to be people. I mean, you think about now, in our current political situation, a lot of people are running around with their heads on fire. But we don't lack for humor, right? Sarcastic humor, black humor, angry humor. We don't stop being making jokes just because things are terrible, and I think that will be the case in the future as well. [In the books], people are dealing with the possible end of their civilization, but they're also going through their day-to-day lives. There are going to be some people who are melancholy, there are going to be some people who are sarcastic, there are going to be some people who are against-all-odds hopeful. There's nothing wrong with writing completely dour fiction where everybody's like, Oh, we're all going to die. Then everybody does die. (So no surprises there.) But on the other hand, for me, in my life experience, even when things get bad, you find some humor in that. Humor is a way that you process things and that you cope with them…and you move on. So for me, it's not the question of, Why is there humor in these books? But rather, Why wouldn't there be humor in these books? My characters tend to be more sarcastic than not, and that's definitely a reflection of me and my own interests as a writer and a reader. If you like sarcastic humor and people making smart quips to each other, then [my books] will be great for you. It's really personal taste.

One of the other things I enjoy is how the ship names are often so funny: You Can Blame It All on Me or The Princess Is Not in This Tower. Do you still enjoy coming up with the names, or are you at the point where you're thinking, Why did I ever start this whole funny ship-naming scenario?

It's a little Easter egg for fans of Iain Banks. In his Culture series, the ships had these long, grandiose names, and they had some humor in them, but they were they weren't what you would think of ship names. There are allusions [in the Interdependency books] to some other science fiction writers, as well. Mary Robinette Kowal gets name-checked in there; so does Nora [N.K.] Jemisin. It's fun to do that sort of stuff in a way that is not obnoxious and doesn't call attention to itself, but if people are looking for it, they can pick it up and see it.

Well, I'm currently writing the sequel to The Dispatcher, which was an Audible Original. [It was released in] audio first and then later was published in print form by Subterranean Press. I have also another collection will probably come out from Subterranean that I'm being cagey about that right now because I don't want to give it away, but it'll be something for people to look forward to. And then I still have ten books left on my contract [with Tor]. Because I had two novels come out in 2018, I'm not likely to have a novel out in 2019, but early 2020 will probably have another book out for people to enjoy.

Are you getting pressure from fans and elsewhere to do another Old Man's War book?

This is the existential question that I think science fiction and fantasy authors have to grapple with: Do they like me for my writing, or do they like me for my series? Either answer can be fine. But for me, I was really happy that Red Shirts won the Hugo Award because it was not part of a series. That said to me that my fans were interested in what I was doing regardless of whether it was in a series.

Now, having said that, I am a commercial author. I get what my role in the world is, so I do write series. I do write the occasional one-off, and sometimes the one-offs become successful and then they become series. So I have no have no high-and-mighty thing against series.

What have you been reading and recommending lately?

I've been a huge fan of Nora [N.K] Jemisin's Broken Earth series, which just concluded and was three-time Hugo Award winner. She is probably the best writer of our generation in science fiction. And there's Catherynne Valente's Space Opera; I think it is an award contender for next year and is just genuinely funny. Weird as hell, but funny. I've also recently liked Mary Robinette Kowal's Lady Astronaut series, starting with The Calculating Stars. Just like Space Opera, I believe The Calculating Stars is going to be a major award contender next year. I feel like she's reviving alternate history.

I mean, I look around at the people that are my peers. These are really good writers. I can't just cruise; I have to be at the top of my game. That's great for me as a writer, and it's great for readers because it means whatever you're seeing come out is top-of-the-line. Like I said, it's possibly the best time to read science fiction ever.