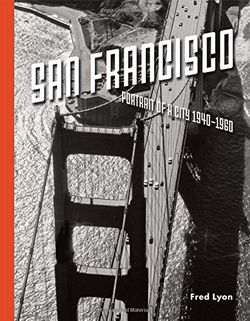 As a fourth-generation San Franciscan, few are as familiar with the City by the Bay as photographer Fred Lyon. His new book, San Francisco: Portrait of a City 1940-1960, not only captures it iconic sights and sites--the Golden Gate Bridge, Chinatown, cable cars, the hills and the fog--but also the iconoclastic, if sometimes off-beat geniuses that made it great--a group to which Lyon firmly belongs. We're thrilled to present dozen incredible images from the book, accompanied by Lyon's own captions.

Learn more about Fred Lyon in the "Living Through the Lens" trailer at the bottom of this page.

San Francisco in the 1940s was irresistible. It still is, but for a brash young photographer recovering from New York’s fashion world, it was feast. Two bridges, steep hills with tiny cable cars, fog, Chinatown, plus a booming postwar optimism, all fed my hungry camera. It seldom had a chance to cool off.

In those headlong days it was impossible to imagine living past thirty.  Anyhow, who would want to hang around when life’s over?  Now however, as I turn 90, Princeton Architectural Press has given these San Francisco images a new life in our book San Francisco: Portrait of a City 1940 – 1960. What a birthday present!

Seen again, from this distance and in the context of change, the content displays a relevance  beyond nostalgia. The City isn’t static, it’s a work in progress.  Still, as we plunge forward, our recent history can guide us, perhaps soothing and even providing an occasional chuckle.

Notes on a handful of images: