Subterranean homesick blues: into the "Underland" with Robert Macfarlane 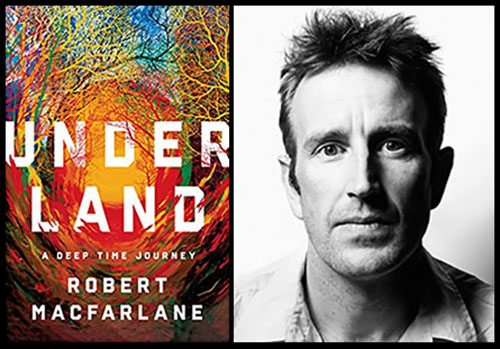 "The way into the underland is through the riven trunk of an old ash tree."

In previous books, Robert Macfarlane has guided us to mountaintops, down ancient footpaths, and through forests of discarded language—in short, landscapes that have both shaped human experience, and have been shaped by it. His latest continues the quest, this time exploring the world beneath our feet, a place both literal and mythic, where artists, adventurers, and criminals have always traveled, willingly or otherwise. For Underland, Macfarlane sought out every accessible subterranean environment imaginable, natural and man-made: The miles of ancient catacombs snaking beneath the streets of Paris; through that riven ash tree and into the river-carved caves beneath an English mountain range; to the underground laboratories where physicists puzzle over the mysteries of dark matter and the universe; and into Greenland's rapidly shrinking ice cap, though a well thrumming with blue light and rushing melt-water. Throughout, a fourth dimension permeates and haunts each of these strange places: the realm of "deep time," an expanse spanning the moment of creation and a post-human future, almost unimaginable yet irresistible to contemplate.

Add its stunning jacket by Stanley Donwood (who creates Radiohead album covers in his spare hours), Underland is a one-of-a-kind journey into the darkest recesses of our history and imaginations, deeply thoughtful, richly written, and infinitely rewarding.

While on tour to support the book, Macfarlane stopped by our offices a few weeks back to talk about the work and thought behind Underland. Listen at the 17:50 mark of this episode of the Amazon Book Review Podcast—he was delightful!—or read an edited transcript below. Underland was a selection for Amazon's best books of the year so far.

I just want to say this up front: There were a number of times where I felt absolutely claustrophobic while reading Underland.

Good! I’m delighted to hear it.

You really did the job in conveying all of these subterranean spaces. All of your books are explorations of one sort or another. You've explored mountains and pathways and languages. What prompted you to go underground for this book?

I started on the mountaintops. I tried to work out why we go high, which is what I've been doing all my life—I'm a climber, a mountaineer. But this one tries to answer the opposite question, which is why we go low. What interested me is how long we've been doing that. We've only been climbing mountains for 300 years in the west, as a kind of leisure pursuit. But we have been going into darkness to make meaning for tens of thousands of years—as long as we've been human. This is a very, very old impulse. To go into the dark, to seek meaning, to tell stories, to leave marks. To keep what's precious safe, and to dispose of what's dangerous.

The subtitle is A Deep Time Journey, and that means more than just geologic time. Is there a humanistic element to it?

I'm glad it looks like there is, because we're kind of crushed by geologic time. We're tiny—we're fragments, fractions. But to me, that sharpens the human moment. I'm fascinated by human stories. The oldest story in literature, the one that began all of this, is the Epic of Gilgamesh, [from] 2,100 BC. It's a story about looking for things. It’s a travelogue, and about going underground. All of literature comes from the idea of a journey in search of something. Going underground is as human as we get.

How far you did you travel to research the book? How did you decide where to go, how far-flung where your journeys?

I traveled about 4.6 billion years. It begins with the birth of the universe and runs hundred thousand years in the future. And within that, I traveled through Europe and up into the Arctic—Greenland, Norway, and Finland. The book really begins in a dark-matter research laboratory, about half a mile underground, in northeast England. It ends in a nuclear waste repository in Finland, which is trying to make high-level nuclear waste safe for a hundred thousand years to come. All the while, I was also gathering stories of cave divers and free divers and mystics and mythics—all of these people who have been drawn down into darkness. I went into the catacombs in Paris. People don't know this City of Light has a City of Darkness right beneath it. I was very pleased when you said you were gripped by the claustrophobia, because this is a book I want people to have to put down at some points.

I was just rereading the catacombs chapter… the way you described wedging yourselves into the tiniest passages, and the fear of getting stuck. And the darkness—both the sensory overload and the sensory deprivation of it.

That's it. Overload and deprivation.

I thought it was this was going to be a book about ice and rock and trees and sediments and deep time. And it became about those things, but also all about human journeys and human longings. I mean, it's death. The underworld is death. The stories of Greek myth, of Orpheus going down to bring Eurydice back. He goofs it. He's a guy, he gets it wrong. He looks back.

They almost all get it wrong.

Almost all the men get it wrong. The women have a bad time in classical myths of the underworld. Hades drags Demeter down there, Persephone in the other version. These stories grip our imaginations.

Of all of the places you went, is there one that affected you most in a profound way, or an awe-inspiring way, or even a frightening way?

Yes. Greenland. I spent we spent the late summer and autumn [of 2016] in Greenland—the summer, then, of greatest melt. It was 22 degrees Celsius in the capital of Greenland. That was not right. Ice was melting everywhere fast, and I had this sense of being in this huge world of ice, this power that exceeds us so much. And yet we encompass it. It was vulnerable to us.

I abseiled down into what's called a moulin, this vertical melt-water shaft in a big, remote glacier year hundreds of miles from anywhere. It was like being in a blue tube humming with life and with strangeness. It was like dropping into another planet altogether. That happens again and again in the underworld. You cross the threshold of the Earth and you're in another planet.

I love some of the words that I learned, especially ruckle.

Ruckle! This little complex stack of sideways boulders that you do not want to disturb when you are crawling through it.

And you crawl through it. You don't crawl over it or around it. You follow the twisty passages.

That's right—you follow an “Ariadne's thread.” Myth runs through the underworld. Even now, [in] the modern underworld, you follow a white cord that's been left by other cavers who have gone through. And if you don't have the cord, you take a wrong turn in the ruckle. And you're rucked.

The book is divided into chambers, which makes sense—it's book about caves. What do the different chambers represent? And is there a natural progression from one to the next?

I really wanted the reader to make a descent, a journey underground. The first chapter is called “Descending,” [and] the last is called “Surfacing.” Within that, you pass through these chambers, these passages of language, of space, and of thought.

We have this idea that you can't see anything underground—it’s dark, it’s depriving, it's confined. Actually, we've gone underground to have visions for so long, and we're still doing that. Dark matter scientists are trying to read the origins of the universe and work out what the hell dark matter is, this great hole in our understanding of the universe. Glaciologists are pulling ice cores up from way down in the blue depths of glaciers, trying to read climates past so they can tell climate futures.

So yes, I wanted the reader to be under pressure. And again, that's why I'm pleased when people say, “Oh, I couldn't do this or this” or “This gripped me and stopped me.” That's good. [laughs]

In the modern world, does the underland still have the same resonance?

This fascinates me, this question. The through line for me is this: We are now living at a time when the underworld is surfacing. We are living in what is increasingly called the Anthropocene—a planet that we are shaping with our numbers and our technologies. The things that were buried are rising to the surface. I call these “un-burials.” Permafrost isn't “perma” any longer. Methane is being released as the tundra melts. Anthrax is coming up from long dead animal cemetery grounds. These are visitors from other deep time pasts, and they’re rising up to the surface. The bodies from conflict—centuries or decades-old—are turning up again.

This is eerie and frightening and symbolic. I'm fascinated by how the underworld has always been the thing that you can't ever quite close.

The fear that deep time might end for us. 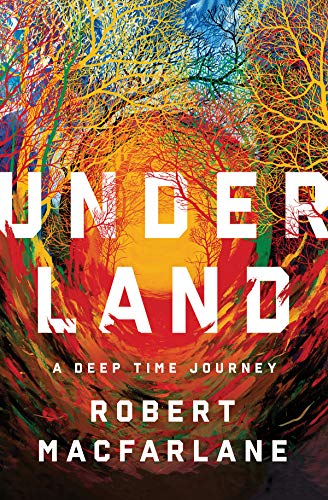