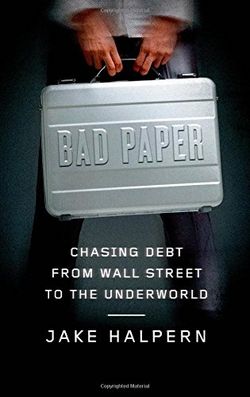 Everyone knows about collections agencies, but how they actually operate is much more interesting than you probably think. Falling somewhere between Glengarry Glen Ross and Mean Streets, Jake Halpern's Bad Paper introduces us to an economy spanning many shades of gray. Halpern's book tracks the descent of "paper" (spreadsheets containing the information of millions of debtors and their debts) as it's sold for pennies on the dollar by banks and credit companies and passed through a network of collectors. Files are often bought and sold multiple times, each transaction stripping away the best remaining prospects as collectors wring paper dry through all manners of persuasion and coercion. Along the way, Halpern encounters first-hand the game's players, from the financiers at the top of the pyramid to mid-level "brokers" and the ground-level phone-jockeys; these are all hard men within their contexts, as one tale of a Tarantino-grade stand-off over stolen information attests. This book is unexpected, and unexpectedly fun.

Read these short biographies of some of the Bad Paper's most interesting players, and check out our Q&A with Halpern below. Bad Paper is a selection for Amazon's Best Books of the Month.

“All of a sudden, you’re swimming in waters you didn’t really want to swim in – never would have conceived you’d be swimming in.” -- Aaron Siegel

Aaron is a banker who made a big gamble. In 2008, he purchased well over a billion dollars worth of unpaid credit card accounts for pennies on the dollar. What he bought, essentially, were just spreadsheets with names, addresses, phone numbers, and balances of debtors. All went well until some of those accounts were stolen and vanished into the debt underworld. Luckily Aaron had someone to call – a fixer named Branson Wilson who knew just what to do. (See below.)

Brandon Wilson is a former armed robber who now runs his own collection agency and debt brokerage firm. He also serves as Aaron’s emissary to the collections industry’s many unsavory precincts.

“I can go and shoot a person—an intruder, at your house—and it would be a lot easier to do something like that with the security contract in place. Whereas if I’m just showing up at your house, and I shoot somebody, now there’s a lot more, you know, paperwork.” – Shafeeq

Shafeeq runs one of the collection agencies that Aaron hires to “work” his paper. He is a devout Muslim, who tries to avoid charging interest whenever possible. Shafeeq also runs his own security firm and is licensed to carry a firearm.

Jimmy: Debt Collector from the East Side of Buffalo

“Back when he ran up into my office with that gun, I’ll tell you what, it felt good. My adrenaline was pumping. I wanted to shoot him.” -- Jimmy

After going to jail, Jimmy turned his back on crime and reinvented himself as a debt collector. Even so, sometimes his past catches up with him.

Larry: A Debt Broker Based in Buffalo

“Certain things you don’t want to know, because once you know something, then you become an accessory to it or responsible—so it’s just better not to know, because most of the dealings on the level that we’re on, they’re not legitimate.” – Larry

Larry worked as a debt broker for years and is now trying to make a living as an artist.

“There are a thousand ways to rip off desperate people. The more desperate you are, and the less you have, the easier it is.” - Theresa

Theresa is a former Marine who fell hopelessly into debt when her marriage ended badly. She paid $2,700 to collectors who claimed to own her debt and then never heard from them again. 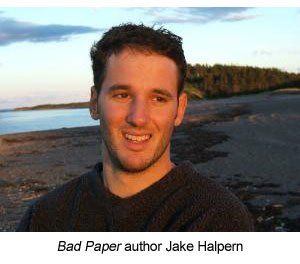 Questions and Answers with Jake Halpern

On the surface, debt collection doesn’t seem like the most scintillating topic. How did you get involved with this story?

I know this sounds odd, but this book owes it existence to two people: my mother and Brad Pitt. It began with my mom. She started getting calls from a debt collector over a debt that she didn’t even owe. So I started investigating the debt collections industry and discovered that my hometown – Buffalo, N.Y. – was one of the epicenters. I ended up writing a profile about a collector, from Buffalo, for The New Yorker. After the article comes out, I get a call from Brad Pitt’s producer, telling me that he wants to turn the story into a TV series with HBO. I was shocked. But he was serious. So I end up traveling back to Buffalo, with the screenwriter, and we stay at my parents' house. It was surreal. The screenwriter is staying up on the third floor and my dad and his wife are making meals for him in the kitchen. Anyway, my job on this trip is to line up some interesting people for the screenwriter to meet, so his script feels authentic. Back when I was doing my story for The New Yorker, no one wanted to talk with me. Now, all of a sudden, I am doing a project with “Brad,” and people are tripping over themselves to talk. One night, the screenwriter and I go out to dinner with a banker and a former armed robber who had gone into business with one another. They tell me an incredible tale. They purchased $1.5 billion worth of bad debt for pennies on the dollar. Their aim was to make a fortune. All goes well on this unlikely venture until some of the debt is stolen and the former armed robber must delve into an underworld where debt is bought and sold on street corners. This quest ends in a showdown with guns in the inner city of Buffalo, N.Y. Needless to say, I was hooked on their story.

What was the most unexpected turn the story took?

There were a bunch of unexpected turns. My favorite involved a character named Shafeeq, who was a smart, charming, gun-toting, black, Muslim polygamist. He is a rather minor character in my story, actually, but he played a pivotal role in one dramatic scene – the showdown with guns – and so I really wanted his perspective. I tried to get him to talk for well over two years, but he refused. Then one day he tells me that he will talk, if I travel to Buffalo and meet him at his mosque on the East Side of Buffalo. So I go. I show up at the mosque at sundown and, almost immediately, this very aggressive panhandler accosts me. Then out of the shadows of the mosque steps Shafeeq. He is ENORMOUS, roughly six and a half feet tall, and weighing more than 300 pounds. The panhandler skedaddles and Shafeeq leads me into his mosque, which is situated in a beautiful old church. We talk for the next three hours. During this time, he give me one of my favorite quotes from the book, which is an impassioned defense of polygamy. He claims that, by being a good father figure to many children in the African American community in Buffalo, he is a powerful force for good, because is modeling good behavior on an exponential level. “You’re Xeroxing righteousness,” he tells me. It’s one of those little, kind of random moments that is just so bizarre, fascinating, and memorable.

The book is filled with rough-around-the-edge characters doing some shady things. Was there any moment you felt uncomfortable, or even at risk?

Just once. I was in the car with a former cocaine dealer, named Jimmy, who had reinvented himself as debt collector. We were on the East Side of Buffalo, which is poor and crime-ridden. Suddenly, Jimmy slams on the brakes, bolts out of the car, and leaves me sitting there for the better part of ten minutes. When he finally returns to the car, Jimmy tells me that he had just spotted a guy he knew, who had recently pulled a gun on him. Jimmy had apparently chased after him but not found him. At that moment, Jimmy was shaking with rage. I just sat there in the car with him, saying nothing while he regained his composure. It was a tense few minutes.

You describe some of the collectors engaging in some dubious practices in order to collect on debt, especially where it comes to taking advantage of debtors’ ignorance (with regard to collection law and their rights) and collector tactics such as bullying. Do you expect reform in this business, and do you hope your book plays a part?

I do hope things change. In 2015, the Consumer Financial Protection Bureau (CFPB) will be issuing new rules that will – hopefully – change the way the consumer debt is bought, sold, and collected upon. And yes, I am hopeful that my book may help shed some small amount of light on the seedier corners of the industry. But ultimately, the ability of the CFPB to clean up this industry will also hinge on policing. Currently it is policing about 175 of the biggest agencies in the business. Yet according to recent industry estimates, there are well over 9,000 collection businesses in America. That’s a lot of ground to cover. So I am hopeful, but I am also doubtful that the industry will be fixed overnight.

Name three of your most influential writers or books.

The Devil and Sherlock Holmes: Tales of Murder, Madness, and Obsession by David Grann. Grann is a superb nonfiction writer. The number of amazing stories he finds, on a regular basis, is mind-blowing.

Newjack: Guarding Sing Sing by Ted Conover. Conover is simply the best reporter I have ever encountered.

The Long Ships by Frans G. Bengtsson. This is a swashbuckling adventure tale involving Vikings. I love Vikings.

Next project, or current obsession?

I am weirdly interest in jailbird lawyers. I like the idea that there are a few prisoners who have studied the law, become erudite, and are helping work on cases. I am currently scouting out a story involving one of them.

In addition to your nonfiction, you co-authored a couple of well-received young adult novels. How’s that different? Do you plan more?

This is true. The biggest difference here – other than the fact that I write about haunted woods and iceberg fortresses – is that I co-write the books with my friend Peter Kujawinski. We wrote the first book in our Dormia series in 2009. Around that time, I was living on Navajo Reservation in northwestern New Mexico, which remains one of the most remote and sparsely settled regions in the continental United States. From my desk, in our tiny ranch house, I watched prairie dogs frolic and tumbleweed blow across the street. Meanwhile, my co-author – Peter – was serving as an American diplomat in Paris. His environs could not have been more radically different. Peter, known simply as “Kujo” by friends and family alike, inhabited a sprawling three-bedroom penthouse with stunning views of the Eiffel Tower. What united us, however, is that we were both twelve-year-olds at heart and wanted to make up imaginary worlds involving magical cities nestled in the mountains. So we started writing the Dormia series. And we just signed a two-book deal with Putnam / Penguin to start a new series. The first book, Nightfall, should be out in about a year.

"Some Monsters I...
Read