"What's More Brave than Throwing Yourself into the Unknown?" - A Conversation with Author Jamie Harrison 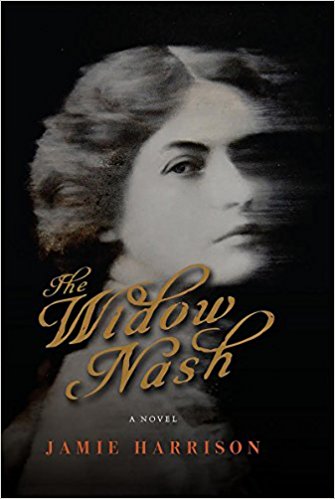 Jamie Harrison's The Widow Nash is a sweeping novel about a woman named Dulcy Remfrey. After her father's death, Dulcy escapes her ex-fiance and her complicated past to start a new life in Montana as "Mrs. Nash." While reading the book, I found myself asking the same question over and over - Can she pull it off?

The book has been getting great attention. Here's what Nancy Pearl had to say about it: "What keeps you reading is not just the quality of the writing, which is just absolutely wonderful, but also to find out: Is she going to do this? Can this be successful? Or is she going to be found out? Are Victor and his brothers going to track her down and, if they do, what's going to happen to her?"

I recently had the opportunity to ask Jamie Harrison some questions about her book and her career:

"What's More Brave than Throwing yourself into the Unknown?" - A Conversation with Author Jamie Harrison

How do you describe the novel to people?

In 1905, a young woman with an unconventional past steps off a train and disappears into a new life, and a new identity. The problems she’s fleeing—lost money, a brutal suitor—follow her.

Dulcy has got some strong men in her life, but she’s strong, too. Can you talk a little about what kind of person she is?

She comes from an idiosyncratic, tough-minded family. Her father was born penniless but has traveled most of the world, and has the arrogance to think he can solve any number of scientific and medical problems; her beloved grandmother may have barely left the family farm, but doesn’t worry about other people’s opinions. And Dulcy’s seen a lot of the world and its misfortunes—people think of the women of that era as protected, but in fact they saw much more of birth, death, and hardship from the ground level than most Americans of our time.

Dulcy reinvents herself in the novel. What was it about reinvention that drew you?

I think most people want to run away at some point in their lives. I wanted to play with the idea that it doesn’t necessarily have to be an act of cowardice—what’s more brave than throwing yourself into the unknown, alone? She has to do it to survive, at least in a life that she’ll find worth living.

There’s a real sense of place in the book. Have you been everywhere you wrote about (albeit in the present)?

Sadly, no—there’s a fair amount of vicarious travel included, and a reader can probably tell when I was longing to leave a Montana winter behind. But I had fun reimagining my own town, Livingston, at the turn of the century, and I visit Seattle often, and I’ve never stopped visiting or loving New York, where I lived for five years.

You’ve written mysteries in the past. How was writing The Widow Nash different from writing those previous books? I imagine in a way, you had more freedom, but maybe I’m wrong.

I did have more freedom. The disadvantage (and advantage, in some ways) of mysteries is that you have to hew to a certain structure—the how and why of murder and discovery. I loved writing my mysteries, and I actually loved the discipline of the form, but the idea that I could do anything I wanted with this novel was wonderful.

Did you always know where it was going? How long did it take to write it?

I had the rough ending in mind from the beginning, and the real struggle, and the rewriting, came mostly in how and when to give the beginning of the story. The first draft began with what happens just before Dulcy gets on the train back to New York, but I couldn’t pull it off. I worked on it for more than five years, but off and on between other jobs, and every time I came back to it I’d want to move the pieces again. My wonderful agent (Dara Hyde of Hill Nadel) and amazing editor (Dan Smetanka of Counterpoint Press) pushed me around, goosed me into going further, told me what worked and what needed explaining. I used to be an editor, and I believe everyone needs editing.

What are you working on next?

I’m halfway into another novel, trying to tell a contemporary woman’s story through scraps of screenplays and novels she’s written (yes, more reinvention). Not everything she writes is necessarily true; I’m having fun with what a child remembers, how families hide and mythologize, and I’m trying to break it into four periods, the earliest of which is 1919.