Capturing Light Amidst the Darkness: Ayobami Adebayo on "Stay with Me" 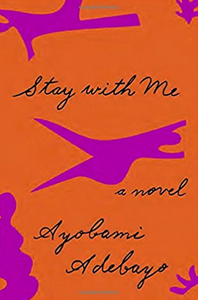 “This book nearly destroyed me; you gotta read it." That’s what a colleague said to me about Ayobami Adebayo’s searing debut novel, Stay with Me (and not sadistically!). Taking place in Nigeria, it's the story of Yejide and Akin--a young married couple who are experiencing fertility issues. When the in-laws’ solution is a second wife, they conspire separately to save their relationship, with devastating consequences. Given such dark subject matter, I wasn't quite sure what to expect when I had the opportunity to sit down with Ms. Adebayo for an audio interview at the Book Expo this past spring.* Turns out, I needn't have steeled myself; Adebayo is disarmingly warm, quick-witted, and quick to laugh. Here, she discusses one of the most talked-about debuts of the summer, a novel that counts literary luminaries like Margaret Atwood as fans.

E.K.: In Stay with Me, Akin recites a familiar fable to his daughter involving a tortoise, but he purposely stops short before revealing the moral to her: "He who has children owns the world." Is this the overarching message of the novel that you want to convey?

A.A.: Yes, I think it’s pretty close...It’s actually a story my grandmother told me, and so it sort of stuck with me. What I’ve learned…It’s enough…You don’t have to have children to be a fulfilled human being; You don’t have to be in a relationship with someone to be validated.

E.K.: There's a tender scene in Stay with Me where Yejide is putting lip gloss on and her daughter is mirroring what she's doing. It's a simple but beautiful moment because the story is so brutal in many ways, so it really tugs at your heart. What was easier to write--a scene like this, or the darker parts of the narrative?

A.A.: I think those tender scenes were actually more difficult, because I had a sense of what was coming, about all the terrible things that were going to happen. The book is also about sickle cell anemia. It's a very terrible disease. But the people who live with it, it's not all darkness, and I wanted to capture the light in the midst of all the darkness.

E.K.: Speaking of light moments, thankfully there are some doozies in Stay with Me, including a pretty bizarre one involving a goat. It's funny, but it also really imparts how powerful cultural pressures can be, so much so that people will do some pretty outrageous things in the hopes of getting pregnant. As bizarre as this scene is, however, there is a ring of truth to it. Do people actually engage in the sorts of rituals Yejide participated in?

A.A.: [Laughs] Yes! But that particular scene was something that I had imagined, and I kept struggling with the writing of it; I considered taking the scene out. But then I had a conversation with my grandmother and some of the things she told me convinced me that it needed to stay, to have a sense of how the pressure can become so intense...The people who do things like that, sometimes it doesn't even make sense to them, but they’re willing to try anything just in case it might work. And I wanted it also to be a bit funny because there’s that saying: When something is so terrible, the only thing you can do is laugh. Laughter is one of the ways in which we cope.

E.K.: Most of the female relationships in this book are very fraught. The culture seems to be structured in such a way as to pressure women into being adversarial. But there is one exception: Iya Bolu. She's one of my favorite characters because she provides some comic relief, and is also kindhearted and wise (and not shy about imparting that wisdom). Does Iya Bolu think it's important to find a partner and have children? Yes. But ladies, get an education first! She's all about priorities, and those priorities don't always align with society's. Was this character inspired by someone/s that you know?

A.A.: She’s inspired by all of the women who have been influential in my life, but especially my mother and grandmother. And it’s interesting because--personality-wise and station-wise--they’re very different from Iya Bolu. But their world-views are similar, and their, this is what she needs to do first, this is what she needs to do second...If you knew them, you probably wouldn’t think that Iya Bolu is the character they are inspired by. But I think her strength, her warmth…she comes through as a friend. You don’t expect that in the beginning. But she really does come through for Yejide, and it’s the one relationship where they’re set up to be competitors, but Iya Bolu doesn’t accept that or act on it. She’s a really remarkable person.

E.K.: You have some pretty famous fans in the literary world, including Margaret Atwood. What was the most helpful writing advice she gave you?

A.A. She was teaching at the university where I was doing my M.A. in creative writing in the U.K., and it wasn’t so much advice as something she demonstrated. The first class she had with us, she told everybody, about fifteen of us, to bring in a novel where we loved the first chapter. With the exception of one, she had read all of the books, and the one she hadn’t read had just come out. The class was comprised of people from six countries. Very diverse, and despite the fact that I love books and am a reader, there were some authors mentioned that I hadn't heard of. But it just showed me that for someone who operates at the level that she is…I was impressed.

E.K.: What was the book you chose?

E.K.: I live in Seattle and, as you know, there's a wonderful writers retreat for women in the area called Hedgebrook. What was the most valuable takeaway from your experience there?

A.A.: Everything--it was amazing. And the food! I still think about and miss the food. But it was just a really supportive environment. And I think at that point, I was struggling with this book, and I’d been working on it for quite a bit of time. I had friends who had started their novels, finished, and gotten published while I was still writing Stay with Me. And I think when I arrived at Hedgebrook I wasn’t sure about myself as a writer. But in each room there is a journal kept by writers who have stayed there previously, and reading that journal, and looking at the bookshelf, and thinking about all the people who had come before...Authors like Ruth Ozeki..I mean…Fantastic alumnus. It gave me a sign--It made me feel confident. It made me feel like I could do this. I finished what would be the final draft of the book while at Hedgebrook so it’s a very special place.

* This interview was edited for length and clarity