No Chimps in Heaven: Mankind's Journey of Imagination

Sapiens: A Brief History of Humankind by Yuval Noah Harari 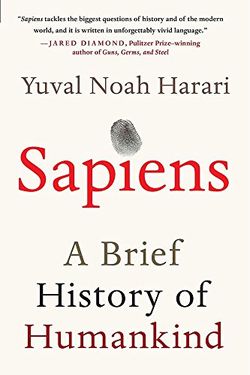 Yuval Noah Harari has some questions. Among the biggest: How did Homo sapiens (or Homo sapiens sapiens , if you’re feeling especially wise today) evolve from an unexceptional savannah-dwelling primate to become the dominant force on the planet, emerging as the lone survivor out of six distinct, competing hominid species? He also has some answers, and they’re not always what you’d expect. Tackling evolutionary concepts from a historian’s perspective, Sapiens: A Brief History of Humankind, describes human development through a framework of three not-necessarily-orthodox “Revolutions”: the Cognitive, the Agricultural, and the Scientific.

His ideas are interesting and often amusing: Why have humans managed to build astonishingly large populations when other primate groups top out at 150 individuals? Because our talent for gossip allows us to build networks in societies too large for personal relationships between everyone, and our universally accepted “imagined realities”--such as money, religion, and Limited Liability Corporations—keep us in line. Who cultivated whom, humans or wheat? Wheat. Though the concepts are unusual and sometimes heavy (as is the book, literally) Harari’s deft prose and wry, subversive humor make quick work of material prone to academic tedium. He’s written a book of popular nonfiction (it was a bestseller overseas, no doubt in part because his conclusions draw controversy) landing somewhere in the middle of a Venn diagram of genetics, sociology, and history. Throughout, Harari returns frequently to another question: Does all this progress make us happier, our lives easier? The answer might disappoint you.

Enjoy this exclusive introduction to the book from Yuval Noah Harari. Sapiens is a selection for Amazon.com's Best Books of the Month for February 2015.

A Brief Introduction to "Sapiens"

How come there is only one human species on earth, when there are many species of foxes, dolphins or bears? There are black bears, brown bears, arctic bears, grizzly bears. So why do humans come in only one flavor?

The fact is that for most of its existence, humankind too comprised many different species. 100,000 years ago, earth was home to at least six of them: Neanderthals lived Europe, Homo denisova and Homo erectus in Asia, Homo soloensis and Homo floresiensis on the islands of Indonesia, and Homo sapiens in Africa. The most important thing to know about all these human species is that none of them was important. They were just another kind of animal, and their impact on the global ecology was not much larger than that of jellyfish or woodpeckers.

Today, only one human species has survived – Homo sapiens. But we Sapiens are by far the most important animal on earth. Not only did we drive to extinction all the other human species, but we have also taken over the entire planet. More than 90% of the big animals of planet earth today are either Sapiens, or the farm animals we have domesticated and enslaved. The world contains about 250,000 chimpanzees and 7 billion Sapiens, 200,000 wild wolves and 500 million domesticated dogs, 900,000 bison and 1.5 billion cattle, 50 million penguins and 25 billion chickens. In Europe, there are 1.6 billion birds of all species combined – and 1.9 billion domesticated chickens.

How did we reach from there to here? How did an insignificant African ape take over the globe? The answer is that we alone, of all the animals on this planet, know how to cooperate flexibly in large numbers. True, ants and bees can also work together in large numbers, but they do so in a very rigid manner. If a bee-hive is facing a new threat or opportunity, the bees cannot reinvent their social system overnight. Wolves and chimpanzees cooperate far more flexibly than ants, but they can do so only with small numbers of individuals. For among chimps, cooperation is based on intimate knowledge. If I am a chimp and I want to cooperate with you, I must know you personally: What kind of chimp are you? Are you a nice chimp? Are you a reliable chimp? How can I cooperate with you if I don’t know you?!

Only Homo sapiens can cooperate in extremely flexible ways with countless numbers of strangers. Put 100,000 chimps in Wall Street or Yankee stadium, and you'll get chaos. Put 100,000 humans there, and you'll get trade networks and sports contests. How do we do it? The answer is our unique imagination. We Sapiens can cooperate with countless strangers because we can create imagined realities together. All other animals use their language only to describe reality. A chimpanzee can cry to her friends: "Look, a lion is coming. Be careful!" or "Look, there's a banana over there. Let's ge it!" Sapiens use language to create completely new realities: fictional realities. A Sapiens can cry: "Look, there's a god above the clouds, and he will punish you if you don’t do what I say!" And if we all believe that story, then we all follow the same laws and rules, and thereby are able to cooperate effectively. As long as millions of people all believe in the same fictions, they obey the same laws.

This is something only Sapiens can do. You can never convince a chimpanzee to do something for you by telling him "Look, if you do what I say, you know what will happen? After you die, you will go to Chimpanzee Heaven and there receive countless bananas for your good deeds. So now do what I say." No chimp will ever believe such a tale. Only Sapiens believe such things. This is why we rule the world, whereas chimps are locked up in zoos and research laboratories.

It is relatively easy to accept that religious networks of cooperation are based on fictional stories. That people build a cathedral together or go on Crusade together because they believe the same stories about God and Heaven. But the same is true of all other types of large scale human cooperation. Money, nations, corporations and human rights are fictions, just like God and Heaven. There is no money in the universe, no nations, no corporations and no human rights – except in the stories we Sapiens have invented and spread around.

Take a dollar bill for example. It has no value in itself. You cannot eat it, drink it, or wear it. But now come extremely creative storytellers like the chairperson of the Federal Reserve or the President of the USA, and they tell us a story. "Look, you see this green piece of paper? It is worth 10 bananas." As long as billions of people believe the story, this green piece of paper really is worth 10 bananas. Because we all believe in this story, we can all cooperate within a single economic system. Indeed, money is probably the most successful story ever told. Not all people believe in God, or in human rights, or in the United States of America. But everybody believes in money, and everybody believes in the dollar bill. Take for example Osama bin Laden. He hated American religion, American politics and American culture – but he was quite fond of American dollars. He had no objection to that particular story.

To conclude, whereas all other animals live in an objective world of trees, rivers, lions and elephants, Homo sapiens lives in dual world. Yes, there are trees and rivers and lions in our world. But on top of that objective reality, we Sapiens have constructed a layer of fictional realities, containing things such as God, the United States, the dollar, Google, and human rights. As history unfolded, these fictional entities have become ever more powerful, so that today they are the most powerful forces in the world. The very survival of trees, rivers and lions now depends on the wishes and decisions of fictional entities such as Google, the United States and the World Bank – entities that exist only in our own imagination.

And what did we get out of it? Is the world a better place than it was 100,000 years ago? We Sapiens are certainly far more powerful than we were in the Stone Age, but are we also happier? Back in the Stone Age, the average person consumed about 4,000 kilocalories per day, for food, clothing, shelter and entertainment. Today in the USA, the average person consumes 228,000 kilocalories per day, which feed not only her stomach, but also her car, her computer and her refrigerator. That is 60 times more energy. Is the average American 60 times happier than the average hunter-gatherers in the Stone Age? It does not seem so. Compared to what most people in history dreamt about, we may be living in paradise. But for some reason, we don’t feel the part. Humankind is like a car whose driver is pressing the fuel paddle for all he is worth – but the car is in neutral, or at most in first gear. So it creates a lot of noise and consumes a lot of fuel, but it is hardly progressing anywhere. 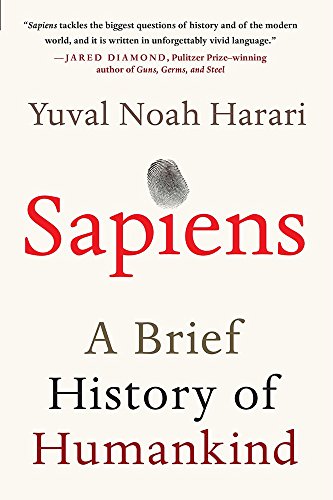