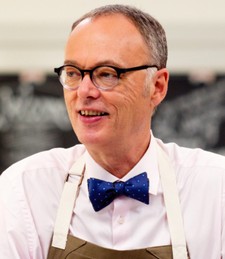 Christopher Kimball, "the guy with the bow tie," is a chef, radio and TV personality, and the founder of Milk Street, a place where he develops fool proof recipes for all of us to enjoy. In 2018 he released a corresponding cookbook, Milk Street: Tuesday Night Recipes, weeknight meals for foodies and people like me who have set themselves on fire frying bacon.

So what has Mr. Kimball been reading this year? See his picks and why he chose them below, and look here for the latest celebrity favorites. For even more recommendations, learn more about the Amazon Books Editors' picks for the Best Books of the Year.

The Food Explorer by Daniel Stone

In the late 19th century at age 22, David Fairchild created the USDA’s Section of Foreign Seed and Plant Introduction and then he spent most of the next four decades traveling the world finding seeds and cuttings to bring back to America; in essence, he was an agricultural spy. If this sounds the adventures of Sinbad, well, it was. Stone writes, “Seedless lemons were found on the island of Poros, walnuts with shells almost as thin as paper on the island of Naxos, and the famous Valonia oak was discovered on Crete.” Among his most curious discoveries were avocados named by the Aztecs using their word for testicle. Citrons, pomelos, mandarins and papedas were mixed to produce the modern orange, lemon and grapefruit. He was no fan of quinoa which he found in Peru in 1898. According to Fairchild, “It was crunchy and fine and had a confusing glow.” His wealthy patron, Babour Lathrop, funded most of his travels since the USDA though Fairchild would be more useful back in Washington, DC sorting seeds. Fairchild’s greatest moment was his promotion of cherry blossom trees to beautify the capitol. The first shipment had to be burned due to insect infestation, but the second was a success, and you can still see the results of his efforts today which reinforces the theme of this book; everyone and everything is an immigrant to America, from dates, mangoes and avocados to the cherry blossom trees in our nation’s capital.

I was introduced to the work of Anissa Helou through Mediterranean Street Food (2006), a cookbook that introduced me to a whole new world of cooking. In Feast, Helou takes a giant step forward by presenting an authoritative and comprehensive journey through the recipes of the Islamic world including Indonesia. Take flatbreads. We have all heard of pita, paratha, naan, and a handful of others but what about yufka, markouk, Somali pancakes or Uzbek Flatbread? And there are truly useful recipe moments such as the Onions and Parsley Salad which makes a perfect bed for grilled or roasted meats or a simple recipe for labneh (drained yogurt) flavored with garlic, tarragon, salt and olive oil. Perhaps the best part of this work is the sense of history. The cooks of the Levant – really greater Syria at one time – share recipes but each region has its own approach, a subtlety often lost on the Western palate. Key to this book and to the cultures it represents is that culinary tradition is stronger; the links to the past more vivid and enduring. In other words, one can taste the past in the present.

Coming to My Senses by Alice Waters

This book is from 2017 but I found it curiously honest and invigorating. Alice was on the cheerleading squad – she was good at cartwheels. She loved to dress up in garden-themed costumes including her Queen of The Garden outfit at the Chatham municipal pool or a third-grade hat fashioned from a fluted aluminum casserole with purple fabric violets. In my favorite aside, she admitted to biting back a youthful biter in Montessori school although she was fired not for that transgression but for wearing a see-through peasant blouse. The theme of the book, however, is that Alice was always part of the counterculture and that Chez Panisse was established as a salon; a communal meeting place that offered conversation as well as food. Although she had little idea of how to run a restaurant in the early days – soups were pureed using a hand mill and tarts were baked one at a time, she held onto her fundamental precept that food can change the world. She thought, for example, that the perfect peach would change Bill Clinton. When he finally showed up for dinner, he was offered the perfect Gravenstein apple (peaches were out of season) but ordered the Mulberry Ice Cream instead. That says it all. What we should want is the simplest, most natural thing in front of us. What we do want is something quite different.