Best Books of the Month: Nonfiction 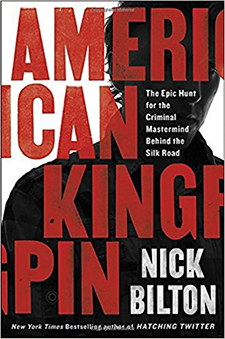 Here are a few of our favorite nonfiction titles for May. See more of our nonfiction picks, and all of the Best Books of the Month.

The Silk Road was once an ancient trade route through Asia, but in 2011 an idealistic young man named Ross Ulbricht used the moniker for a new enterprise that the internet age had never seen; A Dark Web site where everything from drugs and guns to passports could be bought and sold—this was the new Silk Road. Ulbricht was an extreme libertarian who never imagined his revolutionary new free market enterprise would become a billion dollar empire, or that he would be sought by multiple agencies of law enforcement over the coming years. American Kingpin takes us back in time, from Ulbricht’s early failures to becoming Dread Pirate Roberts, the name he adopted to hide himself online. We see how a small pink pill in an anonymous envelope caught the eye of a low-level Homeland security employee and became the catalyst for Federal agency power struggles, and cops who became criminals over the course of a massive manhunt for someone they weren’t even sure existed. The cast of characters involved, those who Ulbricht enlisted to aid him and those who worked to bring him down are a fascinating mix of personalities, but none more so than Dread Pirate Roberts himself. American Kingpin is addictive reading, and whether or not you are already familiar with the Silk Road, by the time this book ends you will likely want to know even more about the Dark Web and the legacy of the world’s largest online retailer of illegal goods. --Seira Wilson

Apollo 8: The Thrilling Story of the First Mission to the Moon by Jeffrey Kluger
Everyone knows Apollo 11’s triumphant landing and the near calamity of Apollo 13, but lost is much of the daring preamble, when the United States and the Soviet Union recklessly shot manned aluminum cans into space on the tips of gargantuan rocket-bombs. Jeffrey Kluger’s Apollo 8 breathlessly fills in much of that history, recounting the first mission to carry astronauts into lunar orbit. He writes, “The Saturn V engines had only one speed, which was full speed.” So does this book.

Astrophysics for People in a Hurry by Neil deGrasse Tyson
When Stephen Hawking published A Brief History of Time in the late 90s, it instantly became a brilliant example of the kind of book that people buy but never read. That's because its title belied its contents: there was real math in those pages, and while the history might have been brief, it sure was complex. Neil deGrasse Tyson is really more of a People's Astrophysicist, and this book accomplishes what its title states in his signature funny, succinct, and straightforward manner.

One Day We'll All Be Dead and None of This Will Matter: Essays by Scaachi Koul
I'm tempted to say "Presented without comment" here, but that would be a disservice to Koul's collection of personal and funny sketches of her experiences as a daughter of Indian immigrants. Instead I'll quote ABR's Penny Mann, who wrote, "Not only do many of Scaachi Koul's laugh-out-loud accounts of her experiences in her everyday life bring smiles time and time again, they also strike with a surprising poignancy that both speaks to your core and challenges you moving forward."