Bill is Back (Thank You Berkeley Breathed) 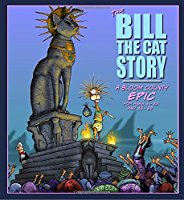 I'm one of the millions who were stunned when Berkeley Breathed decided to cap his pens and leave us longing for Bloom County, for twenty-five years.  So you can imagine my dance of joy--picture a Steve Dallas groove--when Breathed suddenly brought our beloved characters back on, of all places, Facebook.

Now, I'm not a big Facebook person but I will sit here at my desk for an hour (don't tell my boss) reading the latest strips on Breathed's page, trying pretty unsuccessfully not to giggle too loud.  Thankfully, one of Breathed's two new books is a collection of the strips that have appeared on Facebook--Bloom County Episode XI: A New Hope.  The guy really has a way with words, doesn't he?

Breathed's second new book is a first for Bloom County--a kids' picture book that is not just fun for the kiddies, titled The Bill the Cat Story.  Speculate no more, my friends, about the lives Bill led before he arrived for good in Bloom County--it's all here, in full-color glory.  And it is glorious.

I sent Breathed some questions about coming back after all these years and, of course, Bill the Cat--here's what he had to say:

Seira Wilson: On NPR you read the letter from Harper Lee that prompted your return to Bloom County after 25 years—did you know, before that moment, that she was such a huge Opus fan?

Berkeley Breathed: We’d exchanged letters over the years.  I wrote her first in the mid nineties and was shocked to get a reply.  I’m quite certain she didn’t know about my work until then.  A decade later, when I was ending the once-weekly “Opus” strip, she wrote repeatedly to convince me to keep it going.  Not to let my character end.  Not to go quiet.  Irony can elude the genius among us, sometimes.

SW: It’s been less than a year since you started doing the strip again—why did you decide to make this Bill’s year by writing a book telling his origin story?

BB: I loved the challenge of taking the most un kiddie-friendly character and finding a story a child could relate to… while giving the parent reading it something to make it fun. We even went back to make the expression on his face even deader… as that is the core of his character:  he doesn’t have one.  But those around him provide the humanity.  I never make it easy for myself.

SW: So much has changed in the last 25 years—The Real Housewives, kale, spray tans, the Playboy mansion selling to a Twinkie mogul... what do you think is the most absurd pop culture phenomenon to date that you haven’t covered (yet)?

BB: Im getting wary of pop culture as source material, frankly.  Its like a Twinkie, actually.  Ephemeral.  Short-lived. Dissipates like air.  On the other hand, if you think politics is the opposite, you will have fallen into a trap of deceit.

SW: The Bill the Cat Story is a picture book--is this Bill’s first move toward a Garfield kiddie coup?  Who would do Bill’s voice in the movie?

BB: Yes, Bill has got Garfield in his brand sights.  I wouldn’t hold any foul breath on it, tho.  Bill’s voice will be done by me, as a coughing fit.

SW: Do you have a favorite strip featuring Bill the Cat?  Is there one strip that always makes you laugh when you read it?

BB: Its not terribly dignified to have anyone seeing one laugh at one’s own material.  But now, at this point, I do all the time.  My kids hear me behind my door, giggling like an idiot, and they roll their eyes at the blatant indignity of it all.  But now it comes with the job.  I can’t get myself to confess any specifics publicly:  its a bridge too far with the indignity thing.

SW: Is there a character you get the most fan mail about?

BB: I don’t get fan mail.  It disappeared with the digital revolution.  An interesting side effect.  One gets comments on Facebook.  Different beasts, those. Opus remains the spiritual center of the Bloom County experience for people.

SW: Do you own a juicer/smoothie maker?  (I had just been reading a few of his strips that featured smoothie counter absurdity)

BB: I hate smoothies.  Because they won’t offer Firestone IPA beer as an ingredient.  This will come, watch.

SW: What are you reading now?  What’s the last book someone recommended to you?

BB: Soldat.  An autobiography of a German soldier in WW2.  Everything you would want to know about my tastes in books is neatly summed up in that one.  Yes, you can detect those dynamics in the things I choose to write about in my comic strip.  Just to be ironic. 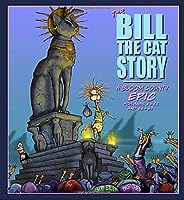 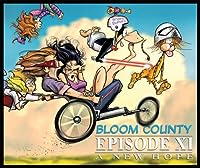