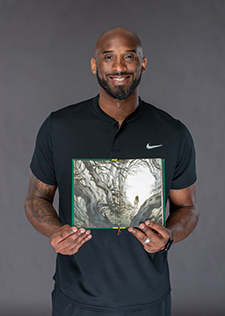 We all knew Kobe Bryant as a world-renowned athlete, but here at the Amazon Book Review we celebrated him as a book lover.

Although he retired from the NBA in 2016, he didn't sit still. He wrote his first book, The Mamba Mentality, which published in 2018. He started a media company called Granity Studios, which became the publishing arm for his Young Adult books aimed, in part, at reluctant readers. He even won the Academy Award for Best Animated Short Film for "Dear Basketball," which was based on the letter he wrote to The Players' Tribune to announce his retirement.

Kobe Bryant provided us with Celebrity Picks in 2018 and 2019. The picture above is the one he provided for his 2019 celebrity picks, and in the picture he is holding up the end papers for Legacy and the Queen, one of three YA books published by Granity Studios in 2019.

We admired what he was doing with books—he approached publishing with obvious care and passion, and he was hands-on when it came to the books. You can hear him talking to Amazon Senior Books Editor Seira Wilson on our podcast (the interview is in our Best Books of March 2019 podcast, and starts at 12:42). He was really into these books.

At the writing of this, The Mamba Mentality is the #1 book on Amazon. It has been there for most of the week. All three YA books are on our best seller lists, too.

It seemed like he was building something special. Maybe we shouldn't be surprised. As he said in an interview that he did with us when The Mamba Mentality was published, for him "[it's] all about focusing on the process and trusting in the hard work when it matters most."

And a little later he describes his approach as, "a mindset that extends way beyond basketball or sports. It’s simple, if you have a goal or a dream, you need to apply the Mamba Mentality to achieve it. Everything worth achieving needs total focus and dedication."