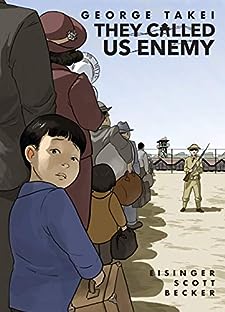 Most of us are aware that there are shameful moments in U.S. history that do not get covered in high school history class. Among those moments is the internment of more than 100,000 Japanese Americans during World War II in ten camps scattered across the United States.

One of those incarcerated American citizens was five-year-old George Takei. Initially made famous though his television roles, Takei has been a longtime advocate of change through democratic engagement.

Now, through his graphic memoir of his childhood years spent in barbed-wire prison camps patrolled by soldiers and tanks, Takei shines a light on one of our nation’s darker decisions and asks readers of all ages to reflect on whether lessons learned about racism and fear have really taken hold.

Adrian Liang, Amazon Book Review: Please tell me about They Called Us Enemy.

George Takei: It’s [about] my childhood imprisonment. People are shocked by that imprisonment by my own country—the United States.

I remember that morning when two soldiers carrying bayoneted rifles—shiny bayonets on them—marched up our driveway, stomped up the porch, and with their fists began pounding on the front door and ordered us out of our home.

We were innocent Japanese Americans—Americans of Japanese ancestry. My mother was born in Sacramento. My father was a San Franciscan. They met and married, and [my siblings and I] were born in Los Angeles. And yet because of these faces—because we happened to look like the people that bombed Pearl Harbor—we were rounded up and imprisoned in barbed wire prison camps.

Most people don’t know this story of America: innocent people, innocent American citizens in prison, simply because of race and more hysteria and the lack of political leadership.

In fact, the politicians were the front-line troops. They were advocating fiercely to lock up the Japs, especially the California politicians. One whose name will remain in history was [Earl Warren,] the Attorney General of the State of California at the time. And he had his eyes on the governor’s office; he wanted to be elected the governor of California. He saw that the single most popular political issue in California was the “lock up the Japs” issue. So this top attorney of the state of California—who knows the law, who knows the Constitution, but who was ambitious—got in front of that issue and became an outspoken advocate of it, and he made an amazing statement. He said, We have no reports of spying or sabotage or any traitorous activities by Japanese Americans, and that is ominous because the Japanese are inscrutable. We don’t know what they’re thinking. So it would be prudent to lock them up before they do anything. This is the top law enforcement officer of the state of California! Saying that the absence of evidence is the evidence to lock us up—innocent Americans who are of Japanese ancestry. No charges, no trial, no due process in prison in these camps.

This happened in the United States when I was five years old. And it goes on to be a real horror story for my parents, but I tell this story [in They Called Us Enemy] from the vantage point of a five-year-old boy because it makes it a bit more accessible. We’re also aiming this book at the youth readership, because they’re going to be the people that are going to be making the new America of tomorrow, and we want them to grow up knowing this history of the United States. Most Americans to this day, when I tell them about my childhood in prison, are shocked that something like this happened in the United States. They’re uneducated on our history. But our American history is an unending cycle of injustice to minorities, from the Native Americans to African Americans whose ancestors began as slaves. And we were in prison. We want another generation to grow up knowing the larger, in-depth history of the United States, and that’s why we’re presenting this as a graphic memoir. 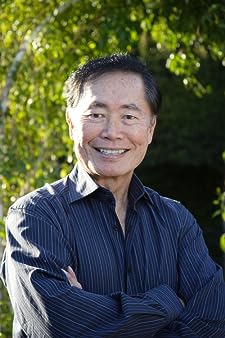 [My father] told me that our democracy, despite all that he lived through, is still the best form of governance. But it’s also the one that demands the most of us, because people have the capacity to do great things, but people are also fallible human beings. President Roosevelt, during the ’30s, proved his greatness by his political savvy and vast network of connections and his creative thinking, and [he] pulled the nation up from that crushing Depression. He was a great president. But great people are also fallible human beings, and he failed as a great president when he made a great mistake which affected us catastrophically.

This is a story that is so important and, particularly now, it is so timely and so relevant to our times when we are repeating that again with sweeping characterizations. President [Roosevelt] classified us as enemy aliens. With equally sweeping statements, Latinos south of the border are [characterized as] drug dealers, murderers, and rapists.

My understanding is that the racism that led to the internment camps was not the first show of racism against Japanese. Japanese weren’t even allowed to immigrate to the United States for 20 years before that [per the Immigration Act of 1924].

The only immigrant group denied naturalized citizenship was immigrants from Asia. So there’s discrimination from the outset. Then the three western states—California, Oregon and Washington—passed the Alien Land laws, which said nothing about Asian immigrants, but it said aliens ineligible to citizenship are denied land ownership in our state. And the only aliens ineligible for citizenship were immigrants from Asia. My maternal grandparents were in farming in the Sacramento delta. He took scrap land, because that was all that he could farm, and turned it into bountiful, productive farmland, but he couldn’t buy it because he was an alien ineligible for citizenship. However, when [my grandfather’s] son was born, he became a landowner because he was an American by virtue of birth, and he owned the land that my grandfather developed.

He was the one that bore the pain and the anguish the most in our family, and yet… he told me that despite everything we went through, this is still the best form of government. But it’s the most demanding form of government because we have to participate in this system to honor the noble ideals of democracy. All men are created equal, but we have to equally participate in it.

This was during the Civil Rights movement, and I was active in that as well. I said, “All right, I’ll organize friends from school and go downtown to the federal building and protest. Why didn’t you do [that], Daddy?” And he said, “Well, they were pointing guns at me. I may have done something like that, but I had to think about your mother, your brother, your sister, and you. If something happened to me, what do you think would happen to you guys?” I understood that, but I kept saying, “But Daddy…” “But Daddy…” So he took me downtown to the Adlai Stevenson for President campaign headquarters. And he said, “This is how we participate in a participatory democracy.”

What about your mother? There are scenes in the graphic novel where you’re talking with your father when you’re a teenager and a young adult, having these conversations with him. What did your mother say about your years in the internment camps?

My mother was a very supportive mother—supportive of my father’s decision. She agreed with everything my father said. But she was determined to make our lives as normal as possible in this abnormal circumstance. She smuggled in a portable sewing machine.

That was one of my favorite scenes!

Anything with sharp edges or pointy edges—anything mechanical—was verboten. But there were hordes of us all with our luggage, and she had the guts to carry that heavy duffle bag, [the sewing machine inside] wrapped with baby blankets and sweaters and disguised with Cracker Jack boxes and the animal cracker boxes. And she marched right in front of those MPs, and she was a gutsy lady to do that. But she was determined to not let her family get depressed or bitter, and she brought beauty into the house. She collected rags and tore them into strips and braided a rug because the [floor was] raw wood. But as far as sharing emotional reactions, she said, “Exactly the way Daddy felt.”

I want to ask about when your parents decided to become No-Nos—how they answered “no” to two questions on the loyalty questionnaire. Can you tell me a bit about that and also about why your parents felt that answering that way was so important?

I don’t know what made me wake up one night. My parents hovered over a kerosene lamp and were talking in whispers, and I heard my mother’s sniffling. I thought she was crying, and I said, “Mama, don’t cry.” And they quickly came over to my bed and said, “No, it’s all right, we’re talking about adult things.” I remember that, but I didn’t understand what that was about, and thinking back, I think that was when they were discussing the loyalty questionnaire. It was anguishing for them. Most of the 30 questions were innocuous questions, but two questions—27 and 28—turned all ten camps into turmoil. Question 27 essentially asked, Will you bear arms to defend the United States of America? This was being asked of my mother. My baby sister was barely becoming a toddler. I was six by that time. My brother was five. She was being asked to abandon us and bear arms to defend the country that’s imprisoning her family. It was preposterous. It was very sloppily put together.

My parents were both No-Nos, and because of that they were categorized as disloyal. It wasn’t disloyalty. They were standing on principal and outraged at the stupidity of those questions. But because of their no-nos, [the government] had to transfer us from an internment camp to what they re-categorized as a segregation camp. Tule Lake been one of the ten internment camps, but that was re-designated a segregation camp. It had three layers of barbed wire fence and a half dozen tanks patrolling the perimeter. This was stupid, ignorant overreaction. Those tanks belonged on a battlefield, not guarding American citizens who were goaded into outrage! They had already been assaulted enough with the freezing of bank accounts, imprisonment—all these other outrages—and then now to have tanks patrolling the perimeter...? It was an outrageous situation.

What percentage of people in that camp do you think were families?

This interview has been edited for length and clarity. 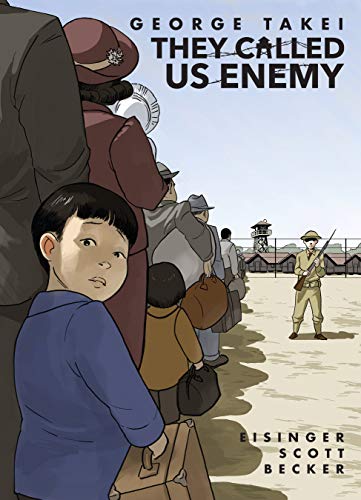