Translation as an Act of Love: Ursula K. Le Guin and Squaring the Circle 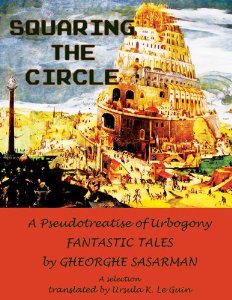 Acts of translation are often truly international efforts. In the case of Squaring the Circle: A Pseudotreatise of Urbogony, this is doubly true. Iconic writer Ursula K. Le Guin selected and translated 24 "Fantastic Tales" by the highly decorated Romanian writer Gheorghe Sasarma in this collection--but not in quite the usual way. Instead of translating from the original language, Le Guin translated initially from the Spanish edition of the book, La Quadratura del Círcolo.

Squaring the Circle, which consists of several short tales each set in a different fantastical city, is perhaps the author's most controversial book. First published in 1975, it fell afoul of Communist censors, who cut about one fourth of the collection. In 1983, as a result of continued censorship, Sasarman left Romania to live in Munich, Germany. Since then he has continued to write, but only published in Romania again in 1989 after the fall of the dictator Ceausescu. He is a potent reminder of the constraints placed on many writers of that era, especially in Romania, where repression was particularly acute.

Le Guin explains in her introduction that, for a while, the book "kept lying around in one place or another in my study." But gradually, the collection exerted an effect on her, as sometimes happens: "It's not rational, not easy to explain [this effect some books have]. They don't glow or vibrate...They just are in view, they're there... And even if I have no idea what it is or what it's about, I have to read it."

As she became absorbed in these tales, Le Guin realized she wanted to translate them into English. "I love translation because I translate for love. I'm an amateur. I translate a text because I love it, or think I do, and love craves close understanding. Translation, for me, is discovery." 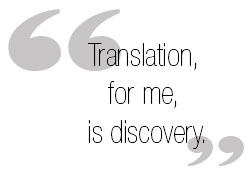 Le Guin's "laborious" translation from Spanish into English was then checked against the Romanian original and a French translation. "Both were of use when my Spanish got stuck or I wanted to see the original wording (for Romanian is, after all, a Romance language, half-familiar even if unreadable by me)." The original Spanish translator, Mariano Martín Rodríguez was also of use, via email.

The result? A collection of quite beautiful and sometimes dark tales, sure to delight lovers of Italo Calvino and Jorge Luis Borges—or aficionados of the work of Le Guin herself.

"We launched Squaring the Circle at the Seattle Library in mid-May," Le Guin told Omnivoracious. "The author's daughter came from Munich, his nephew from Canada, and the Spanish translator from Brussels, and we each read a story in English, Spanish, and Romanian. The audience was great. I think the high point was when the Spanish translator, reading the story 'Kriegbourg,' stabbed himself in the back, and bled to death (with my red scarf)."

As for Le Guin's favorites in the collection, she has several and found it hard to choose. "Maybe 'Arapabad' is the most beautiful single story, but I love 'Sah-Harah,' and 'Oldcastle.' And images haunt me--the greased slides in Vavylon, the doorways in Moebia..."

Squaring the Circle has been lovingly published by Aqueduct Press as an attractive small-sized paperback with copious geometric illustrations.