"Immobility" by Brian Evenson: A Hypothetical Novel Goes On Sale Next Week 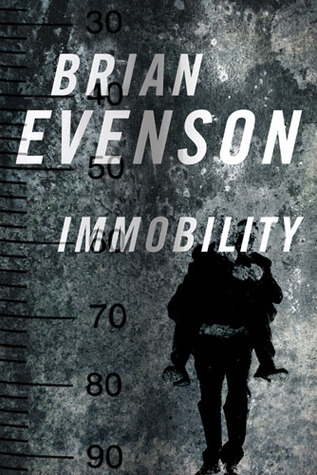 The award-winning Brian Evenson is one of the world’s best writers of unclassifiable, strange fiction—the kinds of stories and novels that cross genres and ignore boundaries. He’s won the O. Henry Prize and is the director of Brown University’s Literary Arts Program. As B.K. Evenson, he has the street cred of having written both an >Aliens novel and a Dead Space novel.

In his original fiction, Evenson can be sparingly lyrical and Kafkaesque in one scene, and brutal and direct in the next. His last novel, Last Days, featured a noir structure and weird cults. It was a harrowing and unforgettable experience. His latest, Immobility, is a science fiction thriller set on a post-collapse Earth. It features the paralyzed character Horkai, who is revived by a surviving community and sent on an odd quest that may affect the future of the planet. The scenes in the novel of subsistence and ruin, of sacrifice and of the surreal are classic Evenson, and Immobility in its intimacy with the characters at times feels, in a good way, like a three-act play. Ritual, in Immobility, unlike in Last Days, is a necessity—the rituals necessary to survive in such a bleak future.

I wrote a blurb for Immobility before it was even written, because it began life as a hypothetical book. If that sounds puzzling, you’ll be pleased to find the answers you’re seeking in the interview below. Omni caught up with Evenson in late February to talk about this upcoming release.

Jeff VanderMeer for Amazon.com: I first heard of this novel because you’d been asked to write a feature on an imaginary book you’d like to write for a blog. Can you tell us a little bit about the process of coming up with the idea, and how it then transformed into a real novel?

Brian Evenson: The book started when Charlie Orr asked me to make up an imaginary book for his blog The Hypothetical Library. The idea was that basically he would design a book cover for a book that I hadn't, wouldn't, but in theory could write, and that it should feel like the kind of book I actually would write. I came up with a basic premise and title, wrote some flap copy for the imaginary book, and then Charlie did a great cover for it. I'd been toying around with the idea of a mystery/noir in a ruined, post-apocalyptic waste with a main character who is paralyzed from the waist down and who is confused about what's actually happening to him, so I wrote up something based on that, thinking that that would be the end of it. But once I'd written it up and given it to Charlie and seen what he'd done with the cover, I started wishing I'd actually written the book. That still probably would have been the end of it if Eric Raab at Tor hadn't read the blog and sent me a note saying "You know, that's a good idea, you really should write it." That was enough to get me to try to turn an imaginary book into a real one.

Amazon.com: I provided a blurb for that fake book, and it’s on the back of the advance reading copy of the real book. It reads in part, “The style is brilliant. The inversion by novel’s end... is perhaps the most natural I’ve read.... The novel confirms Evenson’s ability to colonize your brain much like the best visionaries.” Do you think the blurb is still accurate?

Evenson: The blurb's still accurate [to some degree]--a few things changed about the book as I was writing it, but it's accurate. I like the idea of a blurb for an imaginary book appearing on an actual advance reader copy for a real book, the imaginary bleeding into the real. I'm not sure if it'll be on the final version or not--that may all be blurbs of the real book--but I really enjoyed that confusion of the fictional and the real.

Amazon.com: Yes—I would note I set you up for failure by saying you’d included “a twist so good that no matter how hard you try to figure it out ahead of time, you’ll fail.” Clearly, though, the actual novel succeeds because of the emphasis on the characters and the details of the post-collapse Earth. How did you conceive of the physicality of your far-future scenario? And is there anything about the setting you wrote and then left out?

Evenson: It's a future in which an unnamed event has taken place that has led to a devastation that has made it impossible for people to go outside for any length of time--the air and the atmosphere are poisonous, and the human race seems to be in the process of dying out with, perhaps, something new and post-human taking its place. The book takes place along a route between a group of humans and a bunker-like structure deep in the mountains that has something they need. I had a very specific place in mind as I wrote--Utah, from Provo to Salt Lake--and even used images on Google maps to figure out what was where and how it might look if it was destroyed and then left to sit for decades. I don't have the characters talk about city or place names, though, because they're just not relevant any more. Civilization is simply gone.

Amazon.com: The novel has a fairly small number of main characters. What kinds of challenges does this present?

Evenson: It puts more pressure on the relationships between all the characters, I think. The biggest challenge comes in trying to keep the interactions interesting. It demands a different sort of pacing that's less frenetic. It puts a different kind of pressure on character and character relationships than you'd have in a doorstopper novel with lots of different characters, but I think it also allows you to get to know types of characters that in most novels you'd pass over with little thought. In a different sort of novel, for instance, the mules would be very minor characters indeed, potentially flat, just there to carry the paralyzed Horkai from place to place. They start that way, but as time goes on Horkai has a harder and harder time not seeing them more fully and not empathizing with them. That snuck up on me, just as it sneaks up on him. I like that, think it starts to get us to new places.

Amazon.com: It seems like the post-apocalyptic novel is on the rise again, with a number of them inside and outside of genre. Is this aspect of key interest to you in Immobility, and if not, what is?

Evenson: I think I've long had an interest in post-apocalyptic work. When I was a kid growing up in the 70s, I remember the gas lines, and remember reading things like Damnation Alley and watching and being terrified by movies like "Day of the Animals" (admittedly bad--but it really scared me at the time). But then the Reagan years came along and people just kind of forgot all that, there was a kind of collective amnesia, and it persisted through Clinton and Bush and it's only recently started to dissolve. So yes, that's definitely there. I think when I started writing I had the idea of combining mystery/detective fiction with the apocalyptic novel and doing something that skipped back and forth between literary and genre fiction. As it developed, Samuel Beckett and J. G. Ballard (his stories in particular) became its two guiding stars.

Amazon.com: What was the most fun or interesting thing about writing the novel?

Evenson: Going on Google maps, charting a path through a place I grew up in, and then destroying everything along the way. That was really perversely fun.

Amazon.com: What are you working on now?

Evenson: Under the name “B. K. Evenson” I'm co-writing a novel with Rob Zombie, based on his forthcoming film, Lords of Satan. That's been a lot of fun--challenging and different from things I've done before and it's forcing me to stretch in ways that I like. That's been taking up most of my available time. I'm also gearing up for a new novel, but am not far enough along yet to really know where it's going.

-- This interview was previously posted on March 6th. We reposted today in anticipation of the April 10th publication date. --