Then and Now: Rachel Swirsky, Transitioning from Booklessness to Being Bookful

Rachel Swirsky is among the most talented science fiction/fantasy short story writers working today--one of the new generation that's transforming the genre through a combination of inspiration, renovation, and fresh approaches. She's been nominated for multiple awards, including the Nebula, and attended both iconic genre workshops like Clarion West and iconic mainstream literary workshops like the Iowa Writers Workshop.

Over the summer, Aqueduct Press released a slim sampler: Through the Drowsy Dark. It's not quite the Collected Fiction that the world needs, but it's a start. It also lifted Swirsky out of the state of being bookless--said state having prompted me to interview her for my Conversations with the Bookless feature on my blog back in 2007.

Given the new collection, I thought it'd be interesting to ask Swirsky some of the same questions I asked her back then and juxtapose her answers from when she was bookless to now, when she's bookful. Thus the "now" and "then" responses below, along with some questions specific to this interview... 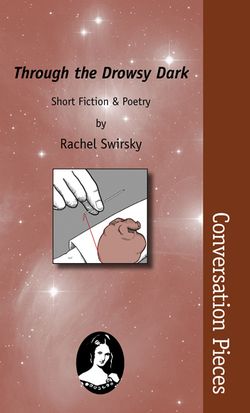 Amazon.com: Where are you, right now, as you’re writing these answers?

Then (2007): I’m upstairs, in my apartment in Iowa City. The window behind my desk looks down on Gilbert Street, with a Victorian house across the street, and beside that a cornery grocery that specializes in wine.

Amazon.com: What do you like most about short fiction?

Now: When I took my first creative writing workshop in college, I was, like most people, primarily a novel reader. Yes, I'd been reading F&SF and Marion Zimmer Bradley's Fantasy Magazine and the occasional other short that came my way, but I felt much more versed in the novel form. "Shit," I remember thinking. "How am I going to write a short story?" Only now it turns out that short stories are all I write.

There's obviously something about the short form that works well with my brain and my lifestyle. I want to say, fliply, that what I like about short stories is that you can finish them. I also like to joke that they work well with my lack of attention span. Maybe those things are true, but they're not about love.

I love the emotional intensity of short fiction. It can be a slash, a shock, a sprint. It's an impact of images and emotions and weirdness and someone else's head space, the powerful stuff of life boiled down to its essence. I love the ability to polish the prose until each word placed is the word you completely intend, not just the word that happened to be there. I love shearing prose down to exactly what needs to exist. I love thinking about short stories! You can get the whole thing in your head and turn it around and keep it turning until you know each facet, each quirk, how all the little events influence each other, how tragedy became inevitable and how it could be avoided, how well people thought they meant even as they started doing things that would hurt people they love...I love that short stories can be so brief, and intense, and passionate.

Then: As a writer, I like the intensity of short fiction. It enables one to concentrate on language in a way that is nearly impossible for longer projects. I like to rewrite things many times, and it’s not always feasible to retype a 90,000 word novel twenty times so you can get the rhythm of the language right in your ear. Short stories are close to poems. They can have a certain impressionism which approximates thought or sensation--bursts of energy instead of sustained documentation. Novels can have an impressionistic feel, but I think it’s harder to achieve.

Amazon.com: What do you most value in the fiction you love?

Now: I think that's hard to say because there are lots of different things I value in different fictions that I love. I'm a novelty seeker, so I particularly like things that are different from everything else I've read. Different on a craft level sometimes, but also different in terms of content--stories that get inside and change you, change your perspective. I especially love stories that are frame-shifting, that flip what thought you knew about the world and enable you to see something else.

Then: I was thinking about this in workshop the other day, because we were all sitting around the table talking about these two fairly interesting pieces, and my primary issues were centered around the language. I feel that one has to be very conscious of how words are altering the reader’s experience. As a reader, a really good voice — not necessarily beautiful, but exceptionally crafted — can draw my interest, and often hide other flaws. When I come upon something with a compelling voice, I will often not even notice other problems.

On the other hand, a compelling voice does little for me if it isn’t backed by a compelling idea. In the workshop, we often read very realistic, but very still stories, that are almost the literary equivalent of a still life painting. Often the subjects are very similar from one to the other, a series of different fruits in different bowls. I can recognize they’re beautifully done, but I don’t find them engaging or inspiring. I like writing that’s tangled and controversial. Often, writing that’s political. I think I savor these things much more than some of the traditional literary values like character or setting. I know writers who think the most important part of a novel is its sense of place. That can be an interesting element of a novel, but it’s certainly not the primary thing I would look for.

Amazon.com: Looking back on the Iowa Writers Workshop, what did you get out of it?  What did you react against?

Now: I think I learned that it's okay to be slow and detailed. I had gotten into a mode before Iowa where I was very aware of word count, and felt like everything had to move as swiftly as possible. Marilynne Robinson suggested I take things slower and exploit all the potential in scenes in order to fully realize them...I guess I reacted against a lot of things... in particular, I guess I felt that some students and teachers had ideas about What Fiction Had to Be. I don't mean in terms of genre, although their rigidity could be employed to exclude certain genres, but I felt the problem was broader than that. Some people felt all characters had to be described like this, all progressions had to happen like this, only certain kinds of emotional arcs were acceptable, and so on and so forth. As a novelty-seeker, I find that very frustrating--I like fiction that's willing to f--- with established norms if that's what it needs to do to tell the story. So I guess that put me on edge.

Then (when asked how the Iowa Writers Workshop was going): I’m currently studying with Johnathan Ames, who is an interesting writer. One thing he said this week that resonated me was that writers need to hang out. That’s how we refill our creative energy. Very often, the solution to writers block probably isn’t to sit at the computer and try harder. It’s to find new people and new situations that ignite one’s desire to write. Jonathan Ames said he found interesting material hanging out with police officers in Jersey. Right now, I’m reading a lot of blogs by people who are politically engaged in more intense ways than I am. I don’t understand writers who don’t pursue as much knowledge as they can get their hands on--new ideas open up new stories.

Amazon.com: What do you like most about your Aqueduct collection? What leaves you cold now? Why did you decide to include poetry?

I'm excited about the dead dog story--that's "Defiled Imagination" which hasn't been published before. At Wiscon in 2008, I read it at a reading on taboo subjects, and it made one of my fellow readers, Mary Hobson, exclaim, "Ewwwwwwww!" in the middle of everything, which I regard as a moment of pure win.
The process of putting the collection together was interesting because I had to read all the stories over and over and over again. It was interesting to see which ones survived that process, and which ones started to feel painful. We actually cut one story at the last minute because I just didn't feel like it was up to snuff.

I'm not sure exactly why I decided to include poetry--I was thinking about the collection for about a year before I actually put it together, and the idea to include poetry was an earlier notion whose genesis I've lost. I guess it felt natural; I publish both poetry and prose. I also wanted to include raw, feminist material since the publisher was Aqueduct, and sometimes the unprocessed, painful stuff comes out as poems.

Amazon.com: Where can we read your fiction online right now, and where is work forthcoming?

Now: My recently award-nominated stories are both at Tor.com. "Eros, Philia, Agape" was nominated for the Hugo, the Sturgeon, and the Locus Award, and came in second place in the Million Writers Award. "A Memory of Wind" was nominated for the Nebula Award. Some of my other favorites are "Dispersed by the Sun, Melting in the Wind," "A Monkey Will Never Be Rid of Its Black Hands," and "How the World Became Quiet: a Post-Human Creation Myth" (that last is a podcast). I have a novella upcoming at Subterranean Magazine, "The Lady Who Plucked Red Flowers by the Queen's Window." I'm really excited about it; it's the longest thing I've ever written, at 18,000 words.

Then: Some of my favorites of my pieces of fiction that are online right now are "Dispersed by the Sun, Melting in the Wind" which is up at Subterranean Online, "Scene from a Dystopia" which was in the issue of Subterranean Magazine edited by John Scalzi, and "A Letter Never Sent" which is a literary piece of mine featured in the Konundrum Engine Literary Review. As far as forthcoming work, I'm especially excited to be appearing in a future issue of Weird Tales. I also have work forthcoming in Fantasy Magazine, Electric Velocipede, your anthology Fast Ships, Black Sails, the anthology Dark Fantasy from Subterranean Press, and Escape Pod.

Amazon.com: Now that your booklessness has been rectified, is the world different?

Now and Forever: The sun glows brighter. The breeze blows sweeter. Rose petals drift behind me when I walk. Even my cats, lazy cynics that they are, have taken up whistling.