"Do it all the way, because then possibilities are endless." 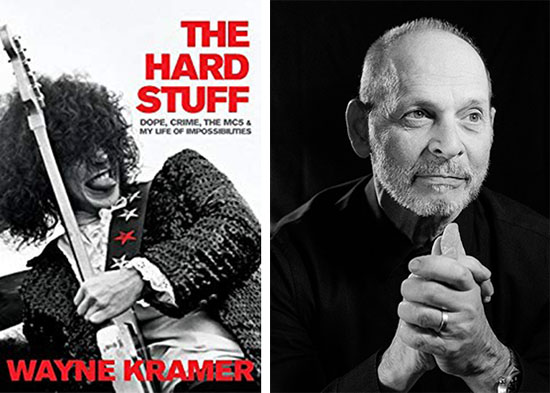 "The Summer of Love didn't make a stop in Detroit."

In the late '60s, there was no shortage of songs about peace, love, and understanding. But with the profane rallying cry of "And right now... right now... right now it's time to... kick out the jams, [EXPLETIVE]s!" the Motor City Five declared their next-level commitment to change. Led by guitarist Wayne Kramer, the MC5 operated more as an arm of insurgent collective than just a band, their confrontational music—a thrumming fusion of jazz and proto-punk—a doorway to for political and social action. Kids those days.

That mission was cemented when their manager, John Sinclair, chartered the White Panther Party, a parallel- and partner- organization to the revolutionary Black Panthers. This was dangerous territory, and the results, personally and professionally, were disastrous. Sinclair and WPP co-founder, Pun Plamondon, were indicted in connection with the bombing of an Ann Arbor CIA office, landing them in federal prison. (Eventually the case made it to the Supreme Court, who delivered a landmark Fourth Amendment ruling on illegal wiretapping. Revolution happens, but not the way you expect it.) Pressure from the FBI ensured that the MC5's career was short-lived, and the band, seemingly on an incendiary trajectory for stardom, flamed out just a few years later. Kramer's life spun down a vortex of substance abuse and a prison term of his own.

Astoundingly, this story has a happy ending. In The Hard Stuff: Dope, Crime, the MC5, and My Life of Impossibilities, Kramer documents his descent into his self-made hell and his reemergence into the world of the living. The book offers no excuses, just frank reflections on his own mistakes, misdeeds, and his path out of the darkness. In the MC5 song "Ramblin' Rose," front-man Rob Tyner (who would merit a book of his own) testified, Brothers and sisters, the time has come for each and every one of you to decide whether you are going to be the problem or whether you are going to be the solution. Kramer chose the latter.

Kramer talked to us about the book, the band, and his return to music. The following is an edited transcript of our conversation. The Hard Stuff is an Amazon Editors' pick for the best biographies and memoirs of August, 2018.

Amazon Book Review: When did you know that you wanted to play guitar? Who were your inspirations, your heroes?

Wayne Kramer: I think I started playing guitar at age 10. And I was just... infected by rock and roll. It was an emerging sound—Little Richard and Chuck Berry, and the instrumental bands of the day. I heard something in that music that I didn't experience in any other area of my life. To me it was kind of like a traction—I was pulled into it. I couldn't get away from it if I tried.

You decided you wanted to be in a band, and it didnt seem like it was very long before the MC5 was coming together. And it also seems like you managed to pull in a disparate group of interesting dudes who weren't like a typical rock band. [Rob] Tyner, for that matter, was not the run-of-the-mill front man....

Once I could play the guitar, once I had mastered the rudiments of music and it became clear I was going to be a musican, i just went on a campaign to find like-minded guys who saw the world the same way I did. When young people apply themselves to something, very often they can achieve it, because there's clarity in their pursuit. And they don't have some of the responsibilites that we have as adults. [laughs]

As it turned out [Tyner's] the archetype: The greatest rock and roll front-man you could imagine. He looked like nobody, he sounded like nobody, and he thought like nobody else. he had a complete vision of what he wanted to try to do.

You wrote "the Summer of Love didn't make a stop in Detroit." How would you describe what was happening there in 1967, and how did that influence what you were doing?

You have to place it in the context of that era. America itself was fractured right down the center of the dinner table, with the war in Vietnam separating my generation from my parents' generation. Baby boomers who came up in the post World War II era of abundance didn't carry that commitement to the government. What we saw, we were critical of. America said that we were about equal rights, but we didn't see people of color receiving equal rights. The war in Vietnam was an undeclared, illegal, immoral "police action," as they called it, and we didn't see the threat. To be a band and to talk about the things around you, the things that are important to you, became the focus of our efforts.

But you went a bit beyond that. Obviously many bands of the late '60s were concerned with politics and social issues—there's something happening here—but you took it a level deeper....

You're right. Detroit in 1967 was the first time I saw the overreach of the police. To watch the Detroit police department beat young people senseless, for nothing, was a powerful expression of the state—its power and authority on the bodies of me and my friends. That was a radicalizing experience. I wanted to address my concernes directly, because my concerns were the same concerns that our fans had. We weren't pretending to be blues masters or folk aficionados. We were a rock band, and we used our sound and our music to address the things that people were concerned about.

The Hard Stuff: Dope, Crime, the MC5, and My Life of Impossibilities

Part of that was the White Panther Party. Could you describe what that was, and how you became involved with it?

The Black Panthers had put out a call for a group in the white community to do parallel but separate work. My sense was this was a way to express our frustration with the slow pace of change. We embraced the Black Panthers program and [MC5 manager] John Sinclair wrote up a program of our own. In a way, it was agitprop theater. But in another way, it was a sincere expression of our rejection of the way the older generation was running things. [My] official title was Minister of Culture in the Street. [laughs]

What were some of the consequences of that, not just for you, your band, and John Sinclair, but for the country as a whole?

Well, we know now, through Freedom of Information requests, that there was a plan formulated in the Justice Department through the White House and the FBI to disrupt and destroy all domestic dissent in this country.

COINTELPRO. We were facing federal indictments, as were all antiestablishment groups—all domestic groups that were protesting the governments policies. We had court cases. We had constant problems with the Detroit police, with the state police, and with the FBI.

And the consequences for us were jail, enormous lawyer costs, and the MC5 being kicked out of the music business. The consequences for the Black Panthers and others were more severe: police death squads around the country murdered Black Panthers. We did not think through the consequences of many of the positions we took, and it was a big mistake. To embrace violence as a strategy was a terrible mistake. We ended up doing the FBI's work for them by discrediting a legitimate civil rights movement, and dicrediting a legitimate anti-war movement. In our "youthful zeal," we ended up causing ourselves a great deal of trouble. That's what youth does. [laughs]

The Supreme Court ruling—based on the White Panther conspiracy trial, which we won—said that we were a nation of laws, not a nation of men, and that the government can't justify warrentless wiretapping under the guise of domestic security. Homeland security, to bring it up to date. [laughs]

Much of the book is about your struggle with substance abuse. Where did that ultimately lead you?

Well, it led to a four-year federal prison term.

How did you end up reengaging with the world, and then later on with the music world, where you've been more active in recent years?

Long and slow. Addiction is a complex condition. It's a long walk into the woods, and it's a long walk back out. To go through the trauma of a prison term and to come out to nothing—which is what most people who go to prison come out to.... I'm not saying it's heroic, but it takes near-heroic effort to reengage with the world and reconnect.

For me it was a long process of finally growing up, letting childish ideas stay in the realm of children and letting adult ideas enter my life as an adult. And to ultimately conclude that I wouldn't survive abusing subdstances the way I had as a young man. Listen, I didn't get sober till I was 50 years old. On April 30, I turned 70. So for the last 20 years, I've been free of the incredible time-consuming, energy-sucking activity of addiction. It's allowed me to return to my first love, which is the arts, and to establish a career as a film and TV composer. To be a responsible adult and bring a child into the world, and feel like I'm competent at fatherhood. It's my greatest reward. It's the coolest thing I ever did.

What is the MC5's legacy?

You might be able to sum it up in the song "Kick Out the Jams": Whatever you decide to do, whatever activity you undertake, to do it full measures. To be in it with both feet. Do it all the way, because then possibilities are endless. The legacy of the MC5 is the legacy of possibilities.

Thank you for taking the time. I love the book, and the cover kicks ass.

I always wondered what we'd do with that photograph.

A Conversation with...
Read