Matt Salinger on his father's books, finally bringing his works to Kindle, and which one is his favorite 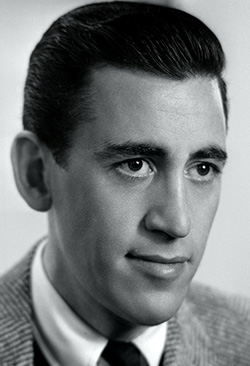 Today would have been J.D. Salinger's 101st birthday. And while he is no longer with us, his work is as widely available to readers as it has ever been—thanks to the decision to finally publish him in ebook form. I wrote about this back in August when Salinger's books first became available on Kindle, and I called out Raise High the Roofbeam, Carpenters as my favorite of his works.

I never would have imagined that we would hear from Salinger's son, Matt Salinger, on his father's work. But he sent us this essay, and we are posting it on J.D. Salinger's 101st birthday. Today is also the first day of a new decade, which seems like the right time to learn more about the decision to release the books in a format that did not exist when Salinger was writing them.

Read on to learn about the decision to make them available to Kindle and to find out which of J.D. Salinger's books is Matt Salinger's favorite.

When my father’s publishers first began talking to me about their “celebration” plans for his 100th birthday, I wasn’t crazy about the idea. But a few such offerings began to make sense. Over the many decades when my father’s agent had standing instructions to say “no” to pretty much everything, there were many more exceptions than have ever been written about, and many of those had to do with making his work available to the variously disabled. I recently had the chance to go through all the correspondence between him and his agents, and between his agents and the outside world, and it’s interesting to see that in virtually every single decade since publication he allowed libraries and not-for-profits to create both rudimentary e-files of the books and even, albeit rarely, audio recordings, for (and ONLY for) their readers who can’t read traditional books. He clearly saw this as something good, even if it wasn’t ideal.

My father would definitely want anyone who can to read the physical books, for he thought physical books to be among the greatest pleasures in life, but for those who cannot he was all for not getting in the way of their reading his work. He really did love his readers. And in the ten years since his death we’ve seen clear evidence of the growing number of readers who prefer (many thousands who only read ebooks - especially in Asia) to read either on their Kindles, or on other devices - even their phones - and though we may wish it were otherwise, we’re not so presumptuous or draconian to say how readers must read! For all these reasons, both precedented and unprecedented, releasing his works as ebooks seemed to be a no-brainer to us, and we’re thrilled to finally do so.

We’ve also found many of the stories this year about readers “rediscovering" his published works to be both exciting and moving. There are those people who merely have re-read The Catcher in the Rye, and we’ve enjoyed reading and hearing how everyone seems to have a new, fresh experience when they come back to it as an older and changed person. But far more gratifying to us in terms of people “rediscovering” the books is to follow how people have gone beyond The Catcher in the Rye and explored his other published books, sometimes for the first time. It’s clear from what Amazon’s reviewer wrote about Raise High the Roofbeam, Carpenters that he thinks it’s my father's best work, and much as I dearly love that book also, and hear my father's voice so clearly in it, I have to say that Zooey - to me - is his most piercingly detailed and helpful work. To me, it’s his masterpiece.

Nearly everyone I’ve met where the conversation comes up has either read The Catcher in the Rye (or claimed to...), or said that they’ve been meaning to read it. And many - perhaps most - have read Nine Stories. But to really KNOW my father’s work you have to read Franny and Zooey - and Raise High the Roofbeam, Carpenters. I go back again and again to Zooey to read about the fat lady. I go back again and again to read Zooey’s emphatic (angry and loving in equal measure) advice to Franny about how she’s praying all wrong, and how she’s angry at her professor with the bad comb-over for all wrong reasons. Those sections not only read beautifully, but they can truly be of far greater help to the sensitive, searching reader who may be wondering where and how he or she fits in to the world they find their bodies inhabiting. It may get too close to preachiness for some, but coming from his heart, and attempting to help sharpen and deepen our spirits as it does, as he was, I find it tremendously reassuring in these too-dark days. Franny and Zooey is most exactly the kind of “beautiful reciprocal” experience Mr. Antolini promised Holden was out there for the taking, for the sensitive reader to learn from! To me Franny and Zooey is a loving voice of sanity as welcome as water in a desert.