Noelle Salazar on "The Flight Girls" 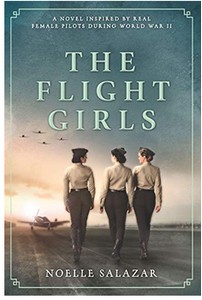 Audrey Coltrane has parlayed a lifelong love of flying into an aviation career during WWII, giving her a bird’s-eye view of the attack on Pearl Harbor. This motivates her to join the Women Airforce Service Pilots program, a calling that will test her courage, and her heart. Here, Noelle Salazar talks about the real-life women who inspired the writing of this exciting debut novel, one that brings a little-known, but fascinating, part of history to the fore (and one that will hopefully animate a new generation of a few good women).

On the morning of December 7, 1941, civilian pilot Cornelia Fort was in the air over Oahu training a new airman recruit when the Japanese fleet flew in. She was the first American pilot to see their approach to the little island in what became known as the Attack on Pearl Harbor, and she was one of the many women who went on to join the Women Airforce Service Pilots (WASP).  It was this anecdote that caught my attention and spurred me to write The Flight Girls.

I had heard briefly of the WASP program previously, but it wasn’t until I read Ms. Fort’s entry in her flight logbook that I became intrigued by who these women were and what they did for the war effort.

During World War II, 1,074 women signed up to fly for their country. They were offered no military benefits, but they got to fly every plane in the military’s arsenal. And, boy, could they fly them. They flew patched-up warplanes, their instructors telling them to “try and shake a wing off” to make sure said wing was intact and battle-ready, tested planes right off the production line, and towed targets for live ammunition gunnery training. After they graduated, most went on to ferry planes around the country while others continued testing new machines or transporting supplies and personnel.

These stories of bravery and service struck such a chord with me. I was writing a novel in my head before I could reach my laptop.

Protagonist Audrey Coltrane is a compilation of the personalities I found within the pages of one of the few books on the subject of the WASP—all wrapped up in an Elizabeth Bennett-like pride-filled head. She is intelligent, stubborn, cautious, and confident in her skillset. And the cast of characters that bloom around her is just as varied and diverse as the women they were inspired by. Women who came from all walks of life. Mothers, students, secretaries and circus performers. Women who came from money and women who had to take odd jobs to pay their way to a pilot’s license.

These women were lost to history. They didn’t receive credit after the program was terminated and their service was up. The government sealed the file on them for thirty-five years before finally granting them veteran status in the late ’70s and, at last, the Congressional Gold Medal in 2009.

They were and are an inspiration.

This is where my breath catches. Where my heart skips a beat and my eyes well. Imagine if their stories were taught in schools. What would that do for young women? What would they dream or dare?

I couldn’t help imagining—images of these women in their too-big flight suits, goggles perched on their heads, wind in their faces—and I just to tell their story.