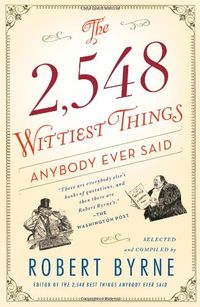 I should mention right away that I loathe epigraphs. It's a visceral reaction: the same feeling I get from footnotes in fiction, the scraping tool dentists use, and people who call their coffee drinks "expresso." Like literary criticism, epigraphs tell me how I'm supposed to feel about a piece of writing before I've had a chance to read it—please don't mess with my head like that. Maybe (maybe) I'll check out your italicized George Orwell excerpt after finishing your book, so I can look for the connection. But not before. Never before.

Here's something I do love, though: pith. And it doesn't get much pithier than a good quotation, expertly employed. Robert Byrne may be America's foremost employer of quotes, as evidenced by his satisfyingly chunky new collection, The 2,548 Wittiest Things Anybody Ever Said. (Why that particular number? He explains in his winning introduction, so I won't spoil the story here.) In logical progression—the chapter on "Love" precedes "Marriage" precedes "Birthing and Babies" precedes "Divorce"—Byrne's book marches us through the stages of our lives as elucidated by masters of the bon mot.

On the modern end of the spectrum, Byrne offers wisdom from Jon Stewart on war, Ellen DeGeneres on religion, and David Sedaris on travel; reaching back into the archives, he calls on trusted sources W.C. Fields (re: children), Jane Austen (re: happiness), and Anthony Powell (re: aging). Comedian Rita Rudner has apparently cornered the market on sex and relationships—"Not only was I not asked to the prom, nobody would tell me where it was"—along with usual suspects Steve Martin and Woody Allen.

Even with all these accomplished wordsmiths to choose from, I have only B.B. King to thank for my favorite quote in Byrne's extensive volume: "Nobody loves me like my mother, and she could be jivin'." You won't see that line at the front of my next book, but it's a serious contender for my gravestone.

Other fine collections for your quoting needs

The Quotable Hitchens: Offend everyone you know as articulately as possible.
The Book of Poisonous Quotes: Somewhat obscure, but worth it for the author bio alone.
Bartlett's Familiar Quotations: The granddaddy of the genre, now in its 17th edition.