What They Were Reading: Sofia Samatar, Author of “A Stranger in Olondria” 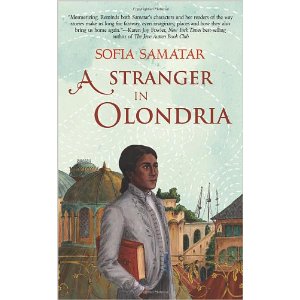 For our new “What Were They Reading” feature, we ask writers what they read while working on their latest book.

This time around, we asked Sofia Samatar, whose first novel A Stranger in Olondria was just published by Small Beer Press. Samatar is an American of Somali and Swiss German Mennonite background. Her writing has appeared in Clarkesworld, Stone Telling, and Strange Horizons. She wrote A Stranger in Olondria in Yambio, South Sudan, where she worked as an English teacher.

Her novel, which recently received a starred review from Library Journal, follows Jevick, a pepper merchant's son, who has been raised on stories of Olondria, a distant land where books are as common as they are rare in his home. When his father dies and Jevick takes his place on the yearly selling trip to Olondria, Jevick's revels in Olondria's Rabelaisian Feast of Birds, he is pulled drastically off course and becomes haunted by the ghost of an illiterate young girl. And things get more complicated from there.

“I wrote the first draft of A Stranger in Olondria in Yambio, South Sudan, where I taught high school English. I was there from 1998 to 2001, and while Yambio was fairly secure, the country was at war. There was a 6 p.m. curfew, and no internet or TV, so in the evenings you could either play cards, read, or listen to the BBC. My husband, Keith Miller, and I did a lot of reading, and both of us wrote novels.

“The only books we had were the ones we brought with us, so we read them over and over. I was used to reading The Lord of the Rings every year, but in Yambio I read other books multiple times: Marilynne Robinson’s Housekeeping, Cormac McCarthy’s All the Pretty Horses, Carole Maso’s AVA, Elias Khoury’s Little Mountain. I got really into big books, because I was always afraid of running out of things to read before we could get to Nairobi, where we went to stay with my in-laws during school breaks. The Nairobi bookshops were full of those Penguin Classics with the peach-colored spines, and these were perfect, because they were cheap and good and LARGE. I read Tolstoy and George Eliot and Jane Austen in those Penguins. I read Dracula for the first time that way, too, and it was like, where has this been all my life? And then there was Proust: so good, so verbose! By the time we left Sudan, I’d read all of Remembrance of Things Past—twice.

“Sometimes it seems odd to me that I wrote a fantasy novel while reading so little genre fantasy. Tolkien, Lewis, Le Guin, Mervyn Peake if you count him: that was it. But of course, if you desire the fantastic, you’ll find it everywhere. The Gothic atmosphere of Jane Eyre, the chilling music of "The Lady of Shalott,” the uncanny doublings of Tayeb Salih’s Season of Migration to the North. And then there was Frankenstein. I bought a little abridged edition of it in Nairobi, and read it out loud to a new group of students every year. Everyone loved it. There’s something so satisfying and real about that story, and it came through powerfully in the pared-down version I read. My students used to cheer and pound on their desks at the good parts—once the assistant headmaster came in to find out what was going on! It was not only one of the best reading experiences of my life, but an education in the power of narrative.

“Now, when I look at A Stranger in Olondria, I see the marks of my reading everywhere. My main character, Jevick, is haunted by a ghost, but he calls her an angel: that’s from Stephen Mitchell’s introduction to his translations of Rilke’s poetry. At one point Jevick lists his impressions of a new town in a sort of dreamlike way: that’s from Hemingway’s Death in the Afternoon. Also, my first draft was 200,000 words long—twice as long as the final version. That was Proust.”