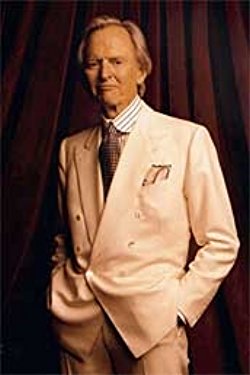 Tom Wolfe died on Monday at the age of 88. In a world where writers aren’t automatically identifiable, his cream colored suits and swish of hair—a look he once described as “neo-pretentious”—made him as recognizable as his most famous titles.

In 1968, Wolfe's nonfiction book The Electric Kool-Aid Acid Test chronicled the trippy exploits of the writer Ken Kesey and his band of Merry Pranksters. Recognized now as one of the seminal works of New Journalism (other writers of New Journalism include Hunter S. Thompson, Joan Didion, Truman Capote, and Gay Talese), Wolfe’s book helped to launch a new form of nonfiction that captured the counterculture movement and greatly influenced a generation of crackerjack writers.

In the early 70s, Wolfe’s work for Rolling Stone writing about the last crewed U.S. moon landing, the Apollo 17 mission, resulted in a four-part series for the magazine titled “Post-Orbital Remorse.” That work led to the 1979 book The Right Stuff, which won the National Book Award and was made into a 1983 movie (starring Sam Shepard as Chuck Yeager) that won four Oscars and was nominated for eight.

In the 80s, Wolfe decided it was time to tackle the novel. Again serializing his work in Rolling Stone, he eventually produced the The Bonfire of the Vanities. The 1987 novel took apart the New York Wall Street mythos in the same year that the fictional Gordon Gecko declared that “greed is good,” using drama and satire to separate bond trader Sherman McCoy from his money and his ego. It became a runaway best-seller, dividing critics and entertaining millions of readers.

In 2010, he was honored by the National Book Foundation for his contribution to American letters.

You can see all of Tom Wolfe’s work here.

A Guide to "Roughing...
Read