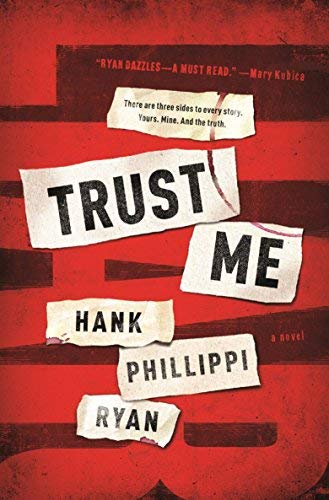 Hank Phillippi Ryan's Trust Me is one of our Best Mysteries & Thrillers of the Month, and for good reason. She has written a novel that will capture your imagination at the same time that it causes you to question your imagination. As Hank Phillippi Ryan and best-selling author/fan Lisa Gardner discuss here, there is always more than one version of the truth--there is what happened, and there is the perception of what happened. Gardner clearly has a high opinion of Trust Me, and it's fun to read this conversation between two authors who are essentially geeking out over the joys of writing, and reading, psychological suspense.

Lisa Gardner: I’m always drawn to female characters who are completely ambiguous, I don’t want to know what my main character’s done—or not done. In Trust Me, you have not one, but two ambiguous women, each who claim to be telling the true story of a terrible crime. When you were writing Trust Me, did you know who to trust? It seems at first that Mercer should be the more powerful character, but Ashlyn is a force of nature herself. Did that surprise you?

Hank Phillippi Ryan: That’s such a fascinating question. I didn’t know what was going to happen in the book, or who would wind up telling the truth. As a reporter, I gravitated to Mercer as the more powerful character, using her journalism techniques to lure Ashlyn into revealing what really happened in that terrible crime. I had imagined, initially, Mercer almost seducing Ashlyn into revealing herself. Wow. I was so wrong!

Ashlyn began to take hold of the story and in every line, she surprised me. She is so convincing, and so potentially innocent, I began to believe her myself. As she came to life, so did Mercer. In an incredibly surprising way.

I could not wait to come to the computer every day to find out what really happened. People say wow, the end of Trust Me really surprised me! And I say: I know, it surprised me, too! And I am gloriously happy about that. Sue Grafton called it the magic, you know? I’m sure she told you that, too.

Lisa: I agree totally with you on the magic part. I never know how my books are going to end. Like you, it gives me incentive to write each day. Now, let’s talk beginnings. Most of my novels start as ideas that are ripped-from-the-headlines, and as an investigative reporter, that must be true of you as well. The case your journalist is reporting on has echoes of the Baby Doe case in Boston a few years ago. And there’s a touch of Casey Anthony, too. How did those real-life cases inspire this story?

Hank: Such an amazing story. Years ago, I was assigned by a big-time publisher to write the true crime nonfiction narrative of the Casey Anthony story. I devoted my entire life to it. I worked night and day, and I will admit to you I thought: this is my calling! I am going to write the next In Cold Blood. But when Casey Anthony was found not guilty, the publisher killed the book. They told me: We don’t need a book about someone who didn’t do it.

I was knocked off my feet. How could I have gotten it so wrong? How could the jury have come to the conclusion they did? What did I miss, what did I not see, what did I not know? I was profoundly affected by the differing versions of the truth.

Then a few years later, my husband, a criminal defense attorney, had a client involved with a gruesome and tragic murder, the Baby Doe case. I listened to him practice his closing argument, and was utterly convinced that his client was innocent. But then I imagined, somewhere across town in Boston, the wife of the prosecutor listening to her husband give his closing argument. In which that very same defendant was guilty. They had used exactly the same evidence to come up with two polar opposite results. How can that be? And I thought... My book my book my book!

Lisa: Such a great story! In Trust Me, journalist Mercer grapples with her perception of the truth. I love the twists and turns that come in psychological suspense. But as a reporter, how do you remain objective, and how did that challenge influence this book?

Hank: As a reporter, I objectively cover a story, and my imagination works in a different way. I write a story that is compelling, and important, and revealing, and educational, and unique and fascinating...but I do not make anything up. There is a huge joy in taking reality and making it into a story using only what I know to be true, from interviews, observation, documents, and research. That’s a craft, a skill I treasure.

And this is key—in a news story, the viewer will never know my personal feelings about the subject. Am I afraid of them, repelled by them, skeptical? Enthusiastic? Do I really want to cover the story at all?

But in fiction, and Trust Me, I’m allowed to get inside the reporter’s head. I can reveal what motive she might have—motives the reader will recognize, but that the character may not be consciously aware of. We think we can hide our bias—but can we? And who might get hurt if we can’t?

Lisa: One of the key elements of psychological suspense is peeling away the layers of what really happened, who these characters really are. In my latest novel, Look for Me, an entire family has been murdered and their teenage daughter is missing. Did the girl help kill her family, or is she a victim? What really happened to this family, and how well do we ever know what’s going on behind closed doors? In Trust Me you handle that locked room cat-and-mouse game so well. How does that work?

Hank: Oh, my goodness! The most intense manipulative battle of wills can take place at the kitchen table, right? And be just as devastating. In Trust Me, the characters would not let me go. Or each other! Ashlyn was accused of a terrible murder, and Mercer the journalist is convinced she is guilty. We understand that from moment one, from Mercer’s point of view, and the evidence seems to mount to prove Ashlyn is guilty. It is inevitable, irrevocable, absolutely what happened.

But what if Mercer is wrong? It was so much fun to peel away the layers of that story, and reveal to Mercer that she possibly could’ve made a horrible mistake. That she could be affected by her own harrowing grief. What if her sorrow for her own life was coloring someone else’s? And what secrets is she hiding?

Or what if... that’s not true at all? How many of us know someone who is toxic, and manipulative, and utterly convincing? But is that Ashlyn, as you’d predict? Or is it Mercer?

Lisa: The reason we love crime fiction is that in the end, we find the answer. The truth. But as I write, I can see both sides of the story, too. What might have happened.

Hank: Yes, I so agree! I am fascinated by the search for the truth. There is a truth, isn’t there? The thing that really actually happened. And there are also the stories that people tell about the truth... the truth the way they see it. And that is what the story is about. We are compelled to find the truth, we need to know it, and I have two answers for that: sometimes we can know. And sometimes... we can’t. That is so realistic to me, and so profound, and so life-changing.

Lisa: I love that! The distinction that there is the truth regarding what happened, and also the truth of what people perceive. That is psychological suspense right there, and explains why Trust Me is such a riveting read. Congratulations, Hank, on another great thriller!