"Maid" - A Conversation with Stephanie Land 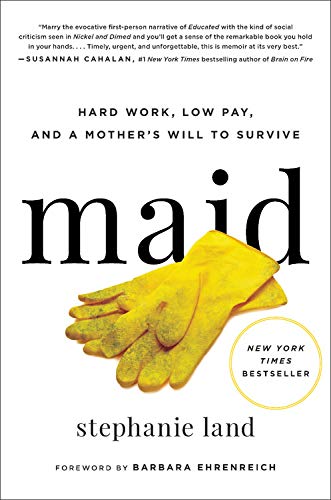 Stephanie Land's nonfiction account of her life, Maid: Hard Work, Low Pay, and a Mother's Will to Survive, was our Best Book of the Month for January. It's a very interesting book, even a little divisive, because Land offers herself up as a primary source for what it is like to work at or below the poverty line, always wanting to get ahead, but barely moving the needle. Along the way, she makes good decisions and bad decisions--like all of us--but when you're essentially broke, every decision you make carries more weight and threatens deeper consequences. There are times when her readers will say, No, don’t do that. That’s a bad decision. But you have to try to put yourself in Land's position at the time, which is what the book tries to do for the reader.

When Amazon Senior Editor Seira Wilson wrote her review for the book, she said in part: "Maid is compelling because it’s so personal. Land isn’t whining or blaming, she’s letting us into her life, sharing feelings of inadequacy, loneliness, and desperation that come with trying so damn hard to do better and still living below the poverty line in spite of her efforts. Land has a hard life but she also has hope and resilience. She finds joy in small moments that are often overlooked in the distraction of material things. Maid is an important work of journalism that offers an insightful and unique perspective on a segment of the working poor from someone who has lived it."

Throughout the book, Land's goal is to become a writer and leave behind her days as a house cleaner. She is also trying to gather enough money to move to Montana (from the Pacific Northwest). I asked her about her life before and after Maid--but I was especially interested in how she managed to get her writing career launched under her particularly difficult circumstances. Here's part of my interview with Stephanie Land:

So how long have you been in Montana now?

About seven years. I moved here in December of 2011.

How did this book come to be? How long have you been writing?

I would argue I started writing when I was ten. I think that was when I first knew that I wanted to be a writer. I started writing in a blog, I think in 2010. I had started a Wordpress blog that I kept up pretty regularly—and then in college was when I finally decided ok, I need to pursue this for real. I had a professor who encouraged me by saying... I don’t know if it’s good to curse... but he said, “Well, the recession is so bad and everything’s so horrible, you might as well do whatever the F you want.” So, that was how I decided to become an English major. And I’d say I learned more of the craft of writing in college, and learned what makes a good essay, and read a lot more than I normally would have, and decided to become a freelancer after I graduated. The article went viral, and then I got a book deal out of that.

Were you always going to write nonfiction? Did you want to write novels? What were you thinking when you wanted to become a writer?

I dabbled in fiction, in my early teens, and I would say tried to write some horrible poems.

I have written some of those as well.

Haven’t we all. I’ve been a journal writer, almost daily, since I was ten years old. And that’s the only kind of writing that I really know—writing from a place of rawness and vulnerability. That was how I learned about myself, and how I digested what was going on. It’s just what I would say I’m best at. I’m horrible at making things up. So that was just what I went with.

When did your essay go viral on the internet? (on Vox)

July of 2015 was when it originally went viral.

And had you been publishing a lot of stuff online.

No. I think I had a couple of pieces on Scary Mommy and Literary Mama, and a local magazines website, and that was really it. So Vox was my first paid up front, big piece as a freelance writer. And I found out about it from an email newsletter that included calls for pitches, and the Vox email was listed on there.

Were you surprised at the reception?

And did people start reaching out to you about a book? How did that process work?

Well, my agent Jeff Kleinman actually contacted me through my website the morning it went viral. And, in a very Jeff-like manner he said, “Hey! I’m an agent from New York and I wonder if you have a book in the works.” I emailed him back and kind of lied and said that I did. And so he said, “Great, send me a few chapters and a summary,” and so I worked over the next few weeks to do that.

Arguably, I did have a book in the works, but it was much different. It was the sought-after book of essays that every writer wants to publish. So I knew that I was going to publish a book. I just felt like what I wanted to write had nothing to do with what people actually wanted to read. So when the article went viral, it was overwhelmingly obvious that that was going to be the first book.

And then how long did it take you to finish the first draft of the book?

I wrote the first draft straight through without looking back on anything. And I was able to work on it full-time, because I sold it on proposal, and so that gave me the financial ability to do that. I wrote it pretty quickly, in maybe three or four months, but that was of course a very, very rough first and dirty draft, and so I spent probably the next year working on revising it, editing it, and reading it over and over again and getting everything right.

Did you enjoy the editorial process?

My editor Krishan Trotman has a lot of lived experience of my story. Originally, I thought the voyeurism of the book was what people wanted, and Krishan was very dedicated to bringing the social justice side of it out. And she convinced me to go deeper into a lot of places and disattachments from relationships that I probably normally wouldn’t have. There were some hard days where maybe a paragraph was written. I’m really glad that she supported that side of the book, because it’s surprisingly what people are grasping onto the most. And I just didn’t think that that was something people would be interested in reading about.

What do the experiences that you wrote about in the book mean to you now?

It’s changed a lot. Before I wrote the book—well before I revised the book—I still felt like that part of my life was a complete failure. A disaster. I still felt guilty as a parent for not giving Mia the life that I wanted for her. In revising the book, I was able to really look at it in a distanced way—and expecially since I was looking at it from a different place. I saw how incredibly hard that time of my life was, and how much I just needed someone to see me in that place, and just sit with me and say “what you’re going through is really hard, and it’s not something that most people experience.” Because, for me, all I saw was that I was almost thirty and in a homeless shelter. And no matter how hard I tried, I just couldn’t seem to make things work, or make money appear in my bank account, or support my kid. And I saw that as a personal failure. But it wasn’t. It was just that I was unlucky, I guess, or didn’t have a lot of the invisible support systems that a lot of other people have.

I only saw that my clients were the same age as me and why wasn’t I on the other side? But now that I’m looking back at it, I’m like, wow, that’s crazy. And I felt a lot of compassion for myself. And a lot of the confidence I have in myself today grew from that compassion.

Your life back then seemed very minute-to-minute, like you were just trying to get everything done that you needed to get done.

You definitely try and just make it through every day. And I didn’t really want to think about the future, because I didn’t want to imagine living that life for longer than the day that I had to live it. If I thought about five or ten years from now… I used to call it a crushing sense of hopelessness. Oh, my god, am I going to be cleaning houses for the next five years? Is this ever going to get better? You feel kind of anxious or overloaded from that. It was really just a one-day-at-a time kind of living.

And I’m definitely hoping that my story brings out a million other stories. There are so many people out there who are living these invisible lives, and we don’t hear from them. That’s why I’m such a supporter, still, even though I’m not technically a writing fellow currently, of Community Change. I was involved with them—they’re an organization out of DC, and they have a writing fellow program that gives you a stipend, which as a low income person is huge. Just to get that regular paycheck. They mentored me in how to write articles and reported pieces, and helped me place them. I think my confidence and my voice grew enormously through that three years that I spent with them.

Finally, how is your daughter doing?

She’s great. She’s eleven and a half and wants to be an astronaut. I had the opportunity and ability to take her to the actual space camp in Alabama over the summer. I kind of wanted to make up for all of the summer camps that I did not put her in over the last four or five years. And she’s awesome. She loves school. She’s incredibly smart and reads a book every few days. She’s doing great.