As Seen Through Books 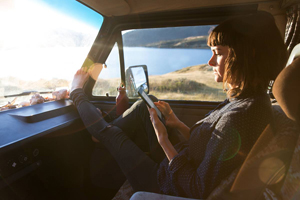 There are endless quotes about the power of books… Magic, a constant friend, mirror of the soul, air… an experience. My personal favorite, the one that continually floats up to the front of my mind since I first read it in college, is from Tim O'Brien's The Things They Carried: “The thing about a story is that you dream it as you tell it, hoping that others might then dream along with you, and in this way memory and imagination and language combine to make spirits in the head. There is the illusion of aliveness.”

Stories help us to empathize, to begin to understand things we haven’t experienced, and maybe never will. I am thankful when someone more poetic than myself commits those stories to print. Sometimes they offend, create controversy, make us uncomfortable; that's what matters, that's what books do—they open the door to conversation, bring light to a darkened reality. Be it Night, The Underground Railroad, Hillbilly Elegy or The Handmaid's Tale—it's the books that tell a story that is often beyond ourselves--and without which, we would remain in the dark.

I actually started thinking about this last night after learning about the passing of a friend I made while working at a Homeless Service Center years ago. Oddly, after hearing the news the preview for the new movie based on Jeannette Walls' The Glass Castle popped up on my screen. The memoir is Walls' account of growing up in a very unconventional family, whose parents chose a homeless life. This book was the focus of a fundraising event we had at the center, and while hearing Walls' words were powerful, it was the conversations I had as a result—among the homeless, among those who weren't, and mostly between homeless and housed—that resonated most. As a result of traveling down memory road, I decided to make a list, incomplete (and absent those already mentioned above) but a start, of the books who's power has remained with me. The ones that have created spirits in my head and have forever remained alive.

So call it a start, or even an inspiration to start somewhere, but start. Read. Allow yourself to be challenged, and then talk about it with others:

Fires in the Dark, by Louise Doughty - There are actually quite a few wonderful books written about the Romany, and Doughty's is actually characterized as fiction; however, her words and portrayals of these beautiful and nearly invisible people ring strong—and after having the privilege of working with the Roma for three years, I can also say they ring true.

Black Like Me by John Howard Griffin - I can't remember when I first read this but I will always hold close Griffin's story of when he darkened his skin and exchanged his life of a southern white man for the experience of an unemployed black man in the Deep South.

A Long Way Gone by Ishmael Beah - The use of child soldiers is a painful and heart wrenching reality. Here Beah tells his story, unfiltered yet flowered with the heart of a thirteen-year-old who knew he could no longer accept the terrible things around him.

The Hiding Place by Corrie ten Boom - This story of the Holocaust has stayed with me, more so than The Diary of a Young Girl. Here Boom, daughter of a Dutch watchmaker and survivor of the concentration camps, tells her story of how she and her family risked their lives to help Jews and underground workers escape from the Nazis. There is something in Boom's spirit and awareness that hit me as complete and so very outside of myself.

Just Mercy by Bryan Stevenson - From the experiences of a young lawyer comes the call, not just for social justice, but social compassion. With echoes of To Kill a Mockingbird, this memoir shines light on where we can make a difference today—and which fights are still a long way from won.

Oranges Are Not the Only Fruit by Jeanette Winterson - A powerful story of a young woman dealing with life—and conformity—in a world that demands something she is not. Winterson has a long list of poignant pieces, but this is the one that opened the door for many important conversations in my world.

Into the Wild by Jon Krakauer - The story of Chris McCandless, a man from a moneyed family who risked everything to experience what it’s like to live without.