Laurel Davis Huber’s historical novel The Velveteen Daughter looks at the life of Pamela Bianco, whose childhood artwork was the toast of London and New York in the 1920s, and her mother, Margery Williams Bianco, who wrote the beloved children’s story, The Velveteen Rabbit. The story is told by Pamela and Margery, in alternating chapters. Both women were intensely creative, but Pamela’s life was more troubled: her early successes, largely due to her father’s encouragement, were followed by periods of self-doubt and depression.

The Velveteen Daughter is fascinating on several levels. Huber brings a once-famous artist back into the public eye, creates an intimate portrait of the relationship between mother and daughter, and thanks to her careful research, places them in the context of the artistic milieu they inhabited, which included Pablo Picasso, playwright Eugene O’Neill, novelist Richard Hughes, and Gertrude Vanderbilt Whitney, the American heiress who brought the teenage Pamela from London to New York for an exhibition that received reviews with headlines like “14-Year-Old Brush Wizard Amazes World with Genius.”

Like its subject, Huber’s novel – her first – is also getting great reviews.

The famously hard-to-please industry magazine, Kirkus, calls it “fast-paced and difficult to put down. ...brilliant,” and Library Journal described it as “…incandescent, pitch-perfect, and destined for greatness.” Laurel Davis Huber answered questions about The Velveteen Daughter by email. Amazon Book Review: Tell us a little about how you came to write The Velveteen Daughter.

Laurel Davis Huber: People tend to assume The Velveteen Rabbit was a childhood favorite of mine, and that later I got interested in the author, Margery Williams—and eventually found out that she had a famous daughter. But the truth is that I didn’t read The Velveteen Rabbit when I was young! I didn’t read it until I was doing research for the book. What actually happened was that one day ten years ago, purely out of procrastination, I reached for a book that had enchanted me when I was a child—an ABC book—and suddenly became curious about the author/illustrator, Pamela Bianco. I Googled her name and soon discovered that she had been a phenomenon in her day—a wildly famous child prodigy artist—and it was only a couple of years after that that I discovered her mother wrote The Velveteen Rabbit. I was obsessed by that point, and knew I had to write their story.

How did you go about doing your research?

Much of it in the beginning was done online, but so many “finds” on the internet led me to travel to real world places. In Indiana, I visited the Lilly Library where I sifted through boxes of letters and photographs (while wearing white gloves!) in the Richard Hughes archives (Hughes was Pamela’s longtime love interest); at the New York Public Library. I spent hours peering at microfiche reels of old New York newspapers; and I took the train to Harlem to find the address of Alexander Gumby’s salon, where Pamela was married. There were many, many more adventures. Research was a years-long treasure hunt that paid off time and time again. I truly loved every minute of it.

Did you consider writing it as non-fiction, based on your research?

I did. And I tried. But I kept imagining dramatic scenes based on letters and photographs, and I began to find the non-fiction attempt too dull. I tried very hard to keep as close to the truth as possible, but I was unable to stop my imagination from filling in where research left a blank. 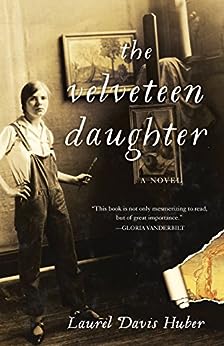 The Velveteen Daughter: A Novel

What intrigues you about the period Pamela worked in?

Pamela and her family lived in Macdougal Alley in Greenwich Village during that most fascinating time, the height of the Bohemian art scene. Edward Hopper, Edna St. Vincent Millay, Theodore Dreiser, the Gershwin brothers, and a host of other artists, writers, and musicians congregated in the Village. Among the crowd was Eugene O’Neill, whose wife Agnes was Pamela’s cousin, and the O’Neills play a large role in the novel.

What did you learn from the process of writing this?

Above all else, perseverance. I suppose any author will say the same. I wrote six versions of the novel, and had many setbacks and rejections along the way, but I was determined to get this story out to the world.

What other contemporary writers inspire you?

I love Anne Patchett, A.S. Byatt, Erik Larson, Laura Hillenbrand, and have a new crush on Fredrik Backman. As for an author who influenced me greatly, I will now make a big confession I have never made before: When I read Anthony Doerr’s exceptionally beautiful novel, All the Light We Cannot See, I fell in totally in love—and promptly tore apart my novel, trimming all my chapters down from 20-30 pages to 2-8 pages. I found new ways to tell the story by interweaving Pamela and Margery’s voices in short pieces. And this became the final version of The Velveteen Daughter.

Do you own any of Pamela Bianco’s work?

I do. I am thrilled to own three of her early drawings and one painting, “The Old Barn,” which figures in the novel.

Are you working on another book?

Yes, but it bears no resemblance to The Velveteen Daughter. It’s contemporary, with elements of magical realism. I have no idea if I can make it work—but I’m having fun trying something entirely new.

Thanks so much, Laurel! It’s been a pleasure to talk to you about Pamela Bianco and The Velveteen Daughter.