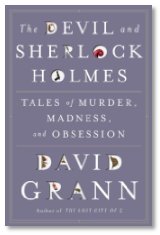 One of my favorite television shows as a kid was "Arthur C. Clarke's Mysterious World," a miniseries that managed to awe me and spook me simultaneously. The premise of the show was simple: examine unexplained events and legends from around the world and attempt to draw conclusions about U.F.O. sightings, Bigfoot, lost civilizations, and other unexplained stories that hover somewhere between fiction and reality.

The moments in each episode that made the greatest impression on me were the interviews with the self-proclaimed experts and researchers who had dedicated themselves to discovering the truth about these phenomena. Some had official titles and degrees, but most were scruffy, wild-eyed men who had spent their adult lives hunting for evidence of creatures, cultures, and places that most people think of as legends. They were simply obsessed with discovering the truth (or something like it).

I was reminded of these individuals when I started David Grann’s newest book, The Devil and Sherlock Holmes. In his first book, a nonfiction account of the hunt for El Dorado, The Lost City of Z, he traced a cast of questionable characters into the Amazon "to record how generations of scientists and adventurers became fatally obsessed" with the hunt for the legendary city. Most never made it back. In The Devil and Sherlock Holmes, Grann focuses on a more eclectic array of obsessive behavior in stories that are truly stranger than fiction. It's a fascinating look at the men and women who dedicate their lives to chasing after truths that may or may not exist.

I recently had the opportunity to meet with David to discuss The Devil and Sherlock Holmes and The Lost City of Z. Read on to find out what David thinks about the "infinitely strange" business of writing nonfiction.

Amazon.com: Have you stayed in touch with any of the individuals you wrote about in The Devil and Sherlock Holmes?

David Grann: In the course of researching the book, I got to know an array of astonishing characters. They include a marine biologist named Steve O’Shea who was trying to be the first person to ever to capture a giant squid and grow it in captivity; sandhogs digging an intricate maze of tunnels hundreds of feet beneath the streets of New York City; a Polish detective investigating whether an author planted clues to an actual murder in his postmodern novel; a fireman who suffered amnesia on 9/11 and is trying to piece together what happened to him on that tragic day; a baseball icon; cold killers; an imposter; and a school teacher, Elizabeth Gilbert, who attempted to prove that a man about to be executed for a deadly fire was really innocent. One of the strange things about reporting is that you spend a lot of time with someone and then resume your separate lives. But I occasionally hear from several of the characters in the stories. Gilbert, who had been paralyzed from the neck down in a car accident, recently called to tell me that after more than five years of rehabilitation she had begun to take steps with the aid of a walker. "I made it eighty yards," she said. "Almost a football field."

Amazon.com: Given the opportunity, are there any stories you would like to revisit in the future?

David Grann: Most of the pieces hopefully capture the essence of a story and don’t need elaboration. But as I learned from the strange and unexpected twists in these true tales, there is always a possibility that something new and startling may occur that would draw me back in.

Amazon.com: As a journalist, how does the experience of writing essays differ from writing a longer work like The Lost City of Z?

David Grann: It’s very different. With a book, you can follow many different characters and paths. With essays, you have to keep the lens tightly focused. I really believe that some stories need to be told in longer narrative form, and others, like the dozen in The Devil and Sherlock Holmes, work ideally as shorter pieces.

Amazon.com: Much of your writing revolves around individuals with unusually strong obsessions. The people you write about have focused their lives on everything from searching for giant squid to disbanding the most powerful gang in the U.S. prison system. Are there any characteristics that these individuals share?

David Grann: Yes, as you mention, many of the characters are compelled by an obsession, even if the object of their obsession is very different. The other thing that many of them share is a curiosity and a hunger to explain, like Sherlock Holmes, the world around them--whether it be the unexplored sea, an underground empire, a secret prison gang, or a mysterious murder.

Amazon.com: Many of these stories are rooted in ambiguous circumstances. Did your initial impressions change during the course of researching these people and events?

David Grann: Definitely. When I began investigating these stories, I knew almost nothing about them. Many originated from little more than a tantalizing hint: a tip from a friend, a reference buried in a news brief. And so I hope that I take the reader on the same kind of journey that I experienced--a journey that often leads to conclusions that I never imagined.

Amazon.com: Many of the stories in The Devil and Sherlock Holmes have a "stranger-than-fiction" quality to them. Have you ever considered trying your hand at fiction, or is the real world strange enough for you?

David Grann: When I first started out as a writer, I had aspirations of becoming a novelist, but I could never invent compelling enough characters or plots. What’s wonderful about nonfiction is I get to meet these incredible characters--stick up men, sandhogs, prison escape artists, imposters, squid hunters, mobsters, FBI agents--and they allow me to spend time with them and document their private thoughts. If these dozen stories in the collection taught me anything, it is that life, to borrow a phrase from Sherlock Holmes, "is infinitely stranger than anything which the mind of man could invent."