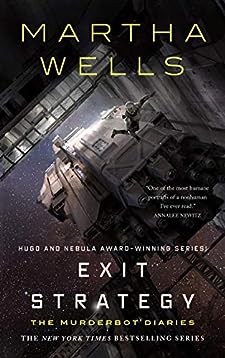 Last year, Martha Wells released All Systems Red, the first novella in the Murderbot Diaries. The response was instaneous and overwhelmingly positive. “I love Murderbot!” said Ann Leckie in a blurb on the cover--and that single quote sums up both the enthusiasm for and the complexity of Wells's cyborg protagonist.

As All Systems Red opens, Murderbot (as the nameless Security Unit has dubbed itself) has recently hacked the system that regulates its behavior, but it's using its newfound freedom simply to binge-watch entertainment vids in between security assignments. It's newest security contract is to protect a group of scientists exploring a planet, but apparently Murderbot isn't the only dangerous thing on the planet....

Wells recently concluded the four-novellas-long Murderbot Diaries with Exit Strategy, which we picked (as we've picked all of the Murderbot books) as one of the best science fiction and fantasy books of the month.

We spoke with Wells on the phone about the novellas, what she's been reading and loving lately, and what's next for Murderbot.

Adrian Liang: What were your feelings when you learned that All Systems Red, the first book in the Murderbot Diaries, had won the Nebula, the Hugo, and the Locus awards, which is a pretty rare achievement?.

Martha Wells: Pretty great. It was actually fairly spread out. The first one I found out about was the nomination for the Nebula Award. I'd been nominated for a Nebula Award for my book The Death of the Necromancer in 1998, I think, and didn't win. So it was really, really exciting to be nominated again, but I don't think I was expecting to win. So that was a wonderful shock to win that—and that's the first major award I've ever won. And then I think the Locus was next, and then the Hugo award. It's just been a dream, really. It's not something I ever expected to happen.

Murderbot is a pretty unique protagonist. It doesn't have a background except that it knows it killed a bunch of people—though it doesn't really remember doing that. It recently won its freedom because it hacked its regulator, but it doesn't want to use its freedom by going out and doing heroic things in the galaxy. And it doesn't want to make friends. So there doesn't seem to be much motivation to be heroic for Murderbot. How challenging was it to work with such a protagonist?

It's been challenging in some respects. [Murderbot] is thinking more about survival and just trying to get through the day…. It feels compassion towards people, since it does have feelings. And as a point of self-respect, being able to save humans has been one of its things it's done really well. So I don't think it's necessarily what you would describe as a heroic impulse, but it is an impulse to help people.

The difficulty of writing the character is mostly in its perspective. It has the ability to do multiple things at once—like get information from the security cameras and get information from [computer] systems—and to use all that to have multiple viewpoints on different physical locations, and to decide what to do about it, and to be able to take action. Writing that is hard when you're just a normal person [laughs], trying to combine all these viewpoints and really thinking about what a character could do in those circumstances. That's probably the most difficult part. I'm also trying to get the timeline right to make sure everything is happening simultaneously and one timeline isn't faster than the other.

When you started All Systems Red, was your intention to write four novellas about Murderbot?

No, it actually wasn't. When I first got the idea, I thought it would be a short story with kind of a sad ending. And then when I started to work on it, I realized it was going to be too long for a short story. I'd read some of the Tor.com novellas that had been coming out and I really enjoyed them. I'd done some novellas for my fantasy series, and I thought, Well, this will be a good format. So I worked on it as a novella. When I finished it and my agent submitted it to Tor.com, I wasn't really thinking that they would ask for a second one. And then they did. Once I wrote the second one, I really did want to do more in this world. So we went ahead and did the other two.

Actually I'm doing a Murderbot novel with Tor.com that will be coming out in 2020. I'm working on that now.

Looking back, is there a book or author that inspired you to be a writer?

I started reading sci-fi and fantasy very early, at the same time as I was reading children's books in elementary school. I was always reading adult science fiction because the two sections were right together in the public library that we used to go to. One thing I read really early on was Erma Bombeck books. They were humor books about her real life, and she talks about being a writer in those books. I think that was the first time I realized that writers were real people and that it was possible for a woman to be a writer. (My cousins told me that all books were ghostwritten.) I was in elementary or middle school when I [understood] that writers were real people. They had their lives, they lived in houses, they could live in the suburbs…. That was a big inspiration for me.

What have you been reading and recommending lately?

I'm a big fan of N. K. Jemisin; I'm waiting for her next book to come out. I've read JY Yang's novellas. Also RF Kuang, who wrote The Poppy War. That was a fantastic book. I think the sequel to that is coming out soon; I've been looking forward to that. Rebecca Roanhorse and Trail of Lightning: I really loved that. Zen Cho is going to have a sequel to Sorcerer for the Crown, which came out a few years ago. I think people have been really anticipating the next book, [The True Queen, March 2019]. I'm reading right now Aliette de Bodard's In the Vanisher's Palace. That's a really neat fantasy with SF overtones. I really like her work. Oh, and I just read The Black God's Drums. That was really good. That was a really fun read and a kind of steampunkish alternate history.

I really try to keep up with new books.

I can see that!

I'm a fast reader but the novellas really help in that you can try a new author. A lot of times they are debut authors. You're like, "Oh, I'm going to go out and read all this person's stuff," and then that's the only thing they've written so far. [Laughs] Oh, and I'm a big fan of Ben Aaronovich. He has a new Rivers of London book coming out, [Lies Sleeping], just next month. I'm really looking forward to that, too. Oh, I'm also a big fan of K. Arsenault Rivera; she did The Tiger's Daughter.

Can you get your hands on new books before they are released?

Sometimes. I got to read K. Arsenault Rivera's The Phoenix Empress early. I was basically emailing people and dropping really big hints, like, "I really want to read this book." So yes, sometimes I do. Not always.