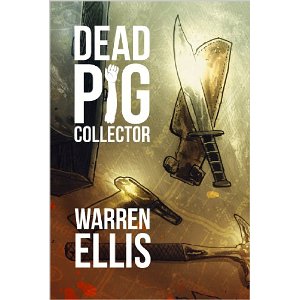 Warren Ellis, creator of iconic comics and such noir-ish novels as Gun Machine, claims he’s never had to dispose of a human body. As he told Amazon.com, “Only animals. And, I suppose, very small children. But they're kind of like animals.” But after reading Dead Pig Collector, a Kindle Single from Farrar, Straus & Giroux, you might be forgiven if you thought otherwise.

Dead Pig Collector introduces readers to Mister Sun, a very proficient businessman whose trade is the murder and spotless removal of human beings. Unfortunately, his current client, in Los Angeles, has turned out to be so dangerously stupid that Mister Sun's work and life are now in jeopardy.

Ellis says he “knew a little” already, when it came to the spot-on depiction of guns and, well, body removal depicted in Dead Pig Collector, because of “too many years spent reading true-crime books and magazines,” while “an evening on the internet gave me the rest. There's a tiny little message board for pretty much everything.”

The effectiveness of the dark tale of Mister Sun’s trip to Los Angeles lies in Ellis’s precision with such details, but Ellis notes that “There are a couple of tiny elisions in there, not least because I didn't actually want to produce a completely operable manual for efficiently disposing of a body. Just a missing step or two. Pretty much everything else has been done in the real world. Not by me. Stay away from my garden.”

Although horrific, Dead Pig Collector also displays a vein of humor, in part from its very matter-of-factness. Ellis believes humor and horror “work the same way. Putting tension on an idea, anticipation, and then the reveal and release.” The humor works well with the horror, the combination helping to create a stark yet interesting picture of Los Angeles and certain aspects of modern life.

What also lends the story a kind of clinical fascination is Ellis’s depiction of Mister Sun himself. “Nobody is the villain of their own story, which is why killers written with awareness are always interesting. Mister Sun has a very specific ethical position, I think, as well as a unique approach to the operation of his life, that made him fascinating to me. Just sitting inside the head of someone who applies that level of remorseless, careful logic to a life of supreme competency.” If he had to have lunch with Mister Sun, Ellis says he would take him “Somewhere refined, like the restaurant at the Savoy. He would appreciate the skill evident in their world.

As for the all-important question of what Ellis would do if Mister Sun was after him, Ellis says he would, “Buy an around-the-world plane ticket and stay on the damn plane until I had a survival plan with multiple redundancies. The worst kind of threat is the patient one.”