We miss you already... Beloved authors we lost in 2020 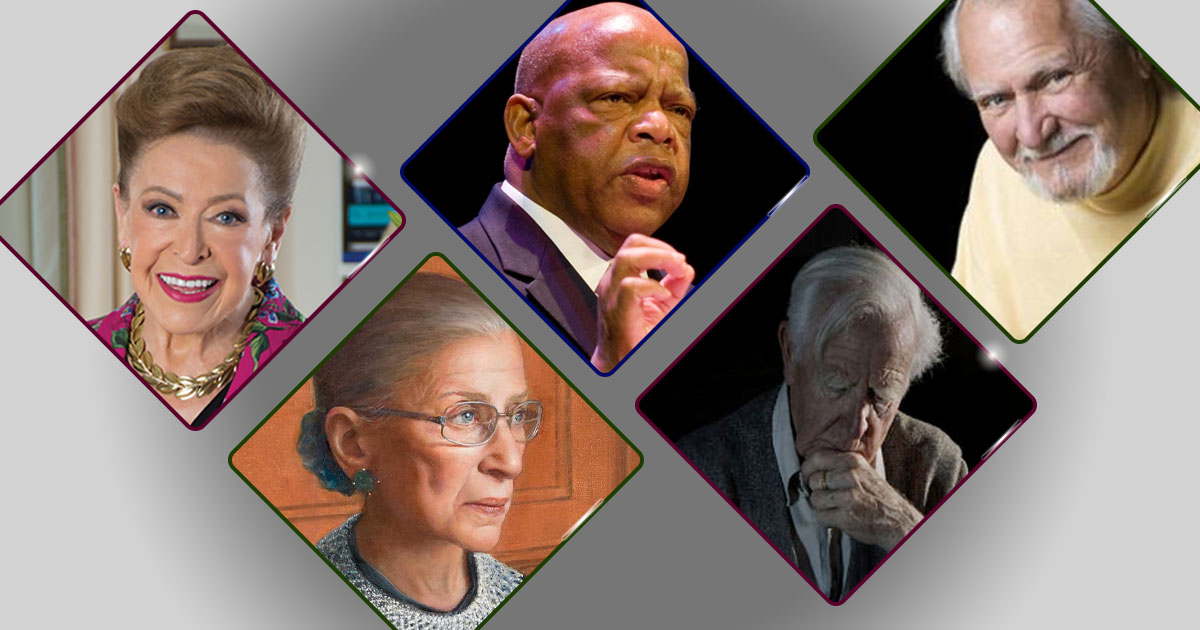 The year of 2020 wrought pain and devastation among millions as COVID-19 surged across the planet, and many reached for solace, knowledge, and escape through books.

Sadly, we lost a number of great authors this year who were a source of comfort for countless readers. And while these authors’ words will live on, we miss their presence among us.

Our hearts go out to their families and friends who knew and loved these writers in a more personal way than we could ever expect to, no matter how often we re-read their books.

Below is a non-exhaustive list of notable authors and publishing icons who passed away in 2020.

The author of the raw and unflinching memoir Prozac Nation, Elizabeth Wurtzel died on January 7 at age 52 of complications from breast cancer. Wurtzel explored with honesty and insight her experience with depression and substance abuse, as well as her up-and-down relationships, in books and in columns.

The son of groundbreaking fantasy author J.R.R. Tolkien and the literary executor of Tolkien’s estate was instrumental in bringing the full scope of his father’s expansive world of legends and myths to readers. Among his greatest achievements was coaxing the hundreds of pages of his father’s notes on the history of Elves, Men, and Middle-earth into publishable form, which became The Silmarillion. Christopher Tolkien passed away on January 16 in Provence, France, at the age of 95.

The journalist and PBS news anchor not only moderated a number of presidential debates but wrote numerous fiction and nonfiction books. His novels often centered on mysteries based on historical events, while his nonfiction work Tension City gave readers an inside look at presidential debates and what Lehrer considered to be game-changing moments during those debates. Lehrer passed away at age 85 on January 23 in Washington, D.C.

Famous for his athleticism and dedication, basketball legend Kobe Bryant was also an author, a publisher, and a champion of reading. Bryant’s best-selling memoir The Mamba Mentality: How I Play explored how he prepared both physically and mentally for every challenge. And Bryant also started Granity Studios, a publisher dedicated to developing books for young readers that pair sports with imagination by creating “stories that are crafted to entertain, by bringing education and inspiration together.” Bryant died in a helicopter crash outside Los Angeles on January 26 at age 41.

Mary Higgins Clark passed away in Naples, Florida on January 31 at the age of 92. Clark reigned for decades at the top of best-seller lists, starting with the novel Where Are the Children?, published in 1975. Simon & Schuster president and CEO Carolyn Reidy (who passed away only a few months later) said in a post on Mary Higgins Clark’s website, “She was deservedly known as the Queen of Suspense, but in our building we have long and fondly thought of her as the First Lady of Simon & Schuster. Today we did not just lose an author, but a true and well-loved member of the Simon & Schuster family.” Clark leaves behind a legacy of smart suspense novels that have thrilled and delighted readers throughout her 40-year career.

In the wide realm of career fantasies, Clive Cussler’s career as adventure novelist and underwater explorer might earn the throne. He wrote 85 books, sold more than 100 million copies worldwide, and discovered dozens of shipwrecks through the real-life nonprofit organization NUMA, which he founded in 1979. His Dirk Pitt and NUMA Files novels brought action, treasure hunting, and heroism into the lives of many. Clive Cussler died on February 24 in Scottsdale, Arizona. He was 88.

Children’s book author and illustrator Tomie dePaola wove his bright illustrations into the imaginations of thousands of young readers with more than 270 books during his long career. His Strega Nona and Mother Goose books were staples on many children’s bookshelves. He passed away on March 30 in New Hampshire.

Carolyn Reidy, who was the CEO of Simon & Schuster, passed away on May 12 at age 71, on Long Island. After working at Random House and William Morrow, Reidy came to S&S in 1992 as president of the trade division. She was named the head executive of S&S in 2008, and she published and championed authors such as Bob Woodward, David McCullough, Mary Higgins Clark, and Stephen King. Said Doris Kearns Goodwin at Reidy's virtual memorial, “In the end, Carolyn still remained that little girl hiding the flashlight under the covers so she could read her favorite books. And how fortunate we all are that she became such a powerful and enduring force in an industry that is designed at its very best to bridge that magic space between the writer and the reader…. You will long be remembered; your legacy will live on for years.”

Carlos Ruiz Zafón is the author of The Shadow of the Wind, a mystery set within a mystery during the Spanish Civil War and the first novel in his Cemetery of Forgotten Books series. His publisher Planeta named The Shadow of the Wind one of the best-selling books in Spanish, second only to Don Quixote, and Stephen King called the book, “One gorgeous read.” Ruiz Zafón died of colon cancer on June 19 at the age of 55, in California.

Joanna Cole took children far beyond their own neighborhoods in the beloved and long-running Magic School Bus series she created with illustrator Bruce Degen. The author of dozens of other children’s books as well, Cole worked as an elementary school teacher, a librarian, and a children’s book editor before turning to writing full-time. The first Magic School Bus book was published in 1986, and the series soon soared, even spawning two TV shows. Cole told The New York Times, “I wanted to write children’s books and be successful at it, but this is something else altogether. This is a once-in-a-lifetime experience.” Cole died on July 12 in Sioux City, Iowa at the age of 75.

John Lewis put his life on the line in his struggle for equal rights for Black Americans in the 1960s, becoming one of the most well-known voices of the Civil Rights movement. Elected to the U.S. House of Representatives in 1986, Lewis continued to make “good trouble,” and he was known as “the conscience of Congress.” In 2011, President Obama awarded to Lewis the Presidential Medal of Freedom, saying, “Time and again, he faced down death so that all of us could share equally in the joys of life.” Lewis was the author of a number of books, including the award-winning graphic novel trilogy March. While each volume of March won numerous awards, March 3 claimed the National Book Award for Young People’s Literature, as well as the Coretta Scott King (Author) Book Award and the Michael L. Printz Award for excellence in literature written for young adults. Lewis passed away on July 17 at the age of 80.

Rodeo roping champion and romance novelist Kari Lynn Dell passed away at age 57 on August 14 of ovarian cancer. Said her editor at Sourcebooks, “We are grateful to have these beautiful books—full of hard-won happily ever afters, laughter, stubborn hearts and stubborner horses—with us always as lasting reminders of Kari's extraordinary talent. It brings us comfort to know we can always crack open the covers of her novels and hear her inimitable voice again.”

Best known for his novel Forrest Gump, Winston Groom wrote dozens of novels and nonfiction books that often centered on the impact of war, ranging from the War of 1812 to Vietnam. His nonfiction book Conversations with the Enemy, written with Duncan Spencer, was a finalist for the Pulitzer Prize for general nonfiction in 1984. Groom died at age 77 at his home in Alabama on September 17.

Terry Goodkind passed away on September 17 at age 72. He was best known for his Sword of Truth fantasy series and its spin-offs, the Nicci Chronicles novels and the Children of D'Hara novellas. Said Goodkind about his views of humanity and how he wanted to portray it in his works, “I believe that heroes should be somebody worth looking up to. What life can be, what’s the best of what life can be.”

U.S. Supreme Court justice Ruth Bader Ginsburg—referred to affectionately by her fans as RBG—became a feminist icon during her lifetime, battling gender inequality before the Supreme Court as a lawyer and within the Supreme Court as a justice. Ginsburg’s 2016 book My Own Words collects her thoughts and writings, and she is the subject of a dozen more books that spanned from laudatory to playful. On September 18, at age 87, Ginsberg died at home in Washington, D.C. of pancreatic cancer.

The longtime host of the TV show Jeopardy had announced in March 2019 that he had Stage 4 pancreatic cancer, and his much anticipated July 2020 memoir, The Answer Is..., became a touchstone for fans who knew the end was coming soon. After a lifetime of making learning cool, Trebek passed away on November 8 in his home in Los Angeles at age 80.

The science fiction author and longtime editor of Analog and Omni magazines passed away in Naples, Florida, on November 29 of COVID-19-related pneumonia and a stroke. He was 88. Bova enjoyed exploring the scientific and technological problems of future humanity, and he was best known for his Orion series and the Grand Tour series of books. Said George R. R. Martin about Ben Bova on his blog, “Giants are passing. We shall not see their like again.”

Award-winning author Alison Lurie passed away at age 94 in Ithaca, New York on December 3. Her novel Foreign Affairs won the Pulitzer Prize for Fiction in 1985, and while she was best known for her sharp-edged social satires, she also wrote nonfiction and edited children’s book collections about folk tales and the fantastical.

One of the preeminent spy novelists of the Cold War, John le Carré revealed through his novels a gritty life of espionage played out in the shadows. Le Carré’s most well-known character, George Smiley, was the antithesis of Ian Fleming’s showy James Bond, and brought a more weighty and world-weary experience to the game of spies. John le Carré died on December 12 of pneumonia in Cornwall, England at the age of 89.

Dear authors, we miss you already.

While we still have these authors' words to read, we miss their presence among us.