"Suddenly, a Knock on the Door": Ira Glass Reads a Story by Etgar Keret 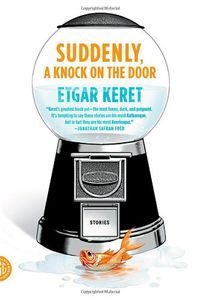 There are authors who cut their milk teeth on short stories, and there are authors who dedicate themselves to the form with Buddha-like focus. Israeli writer Etgar Keret—nerds of a certain ilk will recognize his name from This American Life and The New Yorker—falls firmly into the latter camp, as his newly translated sixth collection makes clear.

The quirky, thought-provoking, often hilarious pieces in Suddenly, a Knock on the Door lend themselves to being read out loud, on your coffee break, or between subway stops. Keret doesn’t bother with a coat of sugar or even Splenda: His characters question themselves and screw up with such regularity that it’s easy for us to plant ourselves in the middle of their lives.

The tension in these stories comes from the sort of decision anyone might make on any given day, like what to stash in your pockets, where to go to lunch, and if you feel like getting a drink with that guy you fooled around with a year ago who didn’t call afterward. In Keret’s world, he’ll be flawed and you’ll be flawed, and whether or not it works out isn’t really the point. The point is to go along for the ride, however brief, and lose yourself inside other people’s moments.

To celebrate the English-language publication of Suddenly, a Knock on the Door, we’re thrilled to share two excerpts with Omnivoracious readers: an exclusive audio version of the title story, read by none other than Ira Glass (squee!); and, after the jump, the full text of “What Animal Are You?”

What Animal Are You?

(This story originally appeared in the June 2011 issue of Harper's Magazine.)

The sentences I’m writing now are for the benefit of German Public Television viewers. A reporter who came to my home today asked me to write something on the computer because it always makes for great visuals: an author writing. It’s a cliché, she realizes that, but clichés are nothing but an unsexy version of the truth, and her role, as a reporter, is to turn that truth into something sexy, to break the cliché with lighting and unusual angles. And the light in my house falls perfectly, without her having to turn on even a single spot, so all that’s left is for me to write.

At first, I just made believe I was writing, but she said it wouldn’t work. People would be able to tell right away that I was just pretending. “Write something for real,” she demanded, and then, to be sure: “A story, not just a bunch of words. Write naturally, the way you always do.” I told her it wasn’t natural for me to be writing while I was having my picture taken for German Public Television, but she insisted. “So use it,” she said. “Write a story about just that—about how unnatural it seems and how the unnaturalness suddenly produces something real, filled with passion. Something that permeates you, from your brain to your loins. Or the other way around. I don’t know how it works with you, what part of your body gets the creative juices flowing. Each person is different.” She told me how she’d once interviewed a Belgian author who, every time he wrote, had an erection. Something about the writing “stiffened his organ”—that’s the expression she used. It was probably a literal translation from German, and it sounded very strange in English.

So I go on writing, not minding her, forgetting she’s there, and I’m natural. As natural as I can be. I have a score to settle with the viewers of German Public Television but this isn’t the time to settle it. This is the time to write. To write things that will appeal, because when you write crap, she’s already reminded me, it comes out terrible on camera.

My son returns from kindergarten. He runs up to me and hugs me. Whenever there’s a television crew in the house, he hugs me. When he was younger, the reporters had to ask him to do it, but by now, he’s a pro: runs up to me, doesn’t look at the camera, gives me a hug, and says, “I love you, Daddy.” He isn’t four yet, but he already understands how things work, this adorable son of mine.

My wife isn’t as good, the German Television reporter says. She doesn’t flow. Keeps fiddling with her hair, stealing glances at the camera. But that isn’t really a problem. You can always edit her out later. That’s what’s so nice about television. In real life it isn’t like that. In real life you can’t edit her out, undo her. Only God can do that, or a bus, if it runs her over. Or a terrible disease. Our upstairs neighbor is a widower. An incurable disease took his wife from him. Not cancer, something else. Something that starts in the guts and ends badly. For six months she was shitting blood. At least that’s what he told me. Six months before God Almighty edited her out. Ever since she died, all kinds of women keep visiting our building, wearing high heels and cheap perfume. They arrive at unlikely hours, sometimes as early as noon. He’s retired, our upstairs neighbor, and his time is his own. And those women, according to my wife at least, they’re whores. When she says “whores” it comes out natural, like she was saying “turnip.” But when she’s being filmed, it doesn’t. Nobody’s perfect.

My son loves the whores who visit our upstairs neighbor. “What animal are you?” he asks them when he bumps into them on the stairs. “Today I’m a mouse, a quick and slippery mouse.” And they get it right away, and throw out the name of an animal: an elephant, a bear, a butterfly. Each whore and her animal. It’s strange, because with other people, when he asks them about the animals, they simply don’t catch on. But the whores just go along with it.

Which gets me thinking that the next time a television crew arrives I’ll bring one of them instead of my wife, and that way it’ll be more natural. They look great. Cheap, but great. And my son gets along better with them too. When he asks my wife what animal she is, she always insists: “I’m not an animal, sweetie, I’m a person. I’m your mommy.” And then he always starts to cry.

Why can’t she just go with the flow, my wife? Why is it so easy for her to call women with cheap perfume “whores” but when it comes to telling a little boy “I’m a giraffe” it’s more than she can handle? It really gets on my nerves. Makes me want to hit someone. Not her. Her I love. But someone. To take out my frustrations on someone who has it coming. Right-wingers can take it out on Arabs. Racists on blacks. But those of us who belong to the liberal left are trapped. We’ve boxed ourselves in. We have nobody to take it out on. “Don’t call them whores,” I rail at my wife. “You don’t know for a fact that they’re whores, do you? You’ve never seen anyone pay them or anything, so don’t call them that, okay? How would you feel if someone called you a whore?”

“Great,” the German reporter says. “I love it. The crease in your forehead. The frenzied keystrokes. Now all we need are an intercut with translations of your books in different languages, so our viewers can tell how successful you are—and that hug from your son one more time. The first time he ran up to you so quickly that Jörg, our cameraman, didn’t have a chance to change the focus.” My wife wants to know if the German reporter needs her to hug me again too, and in my heart I pray she’ll say yes. I’d really love my wife to hug me again, her smooth arms tightening around me, as if there’s nothing else in the world but us. “No need,” the German says in an icy voice. “We’ve got that already.” “What animal are you?” my son asks the German, and I quickly translate into English. “I’m not an animal,” she laughs, running her long fingernails through his hair. “I’m a monster. A monster that came from across the ocean to eat pretty little children like you.” “She says she’s a songbird,” I translate to my son with impeccable naturalness. “She says she’s a red-feathered songbird, who flew here from a faraway land.”