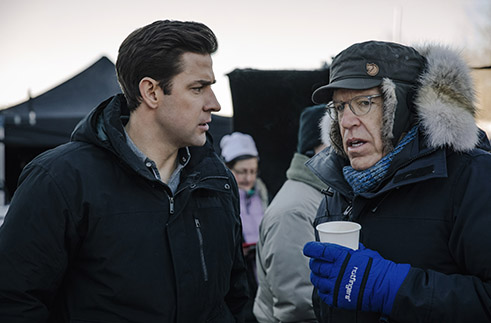 On August 31, viewers were introduced to a modern, new chapter of Jack Ryan's life and career in the first, eight-episode season of Tom Clancy's Jack Ryan, available on Amazon Prime Video.

First introduced to the world in Tom Clancy's 1984 technothriller The Hunt for Red October, Jack Ryan has been on the front lines against threats to the U.S. and the free world as a CIA analyst, the National Security Advisor, and, finally, the President of the United States.

Now viewers get to see Jack Ryan again in his early CIA analyst role, but the challenges and the enemies have been updated to reflect the world today.

We spoke with series creator Carlton Cuse (photo, right) about the intersection between the storytelling of the late Tom Clancy and today's world, and how they made sure that the new Jack Ryan character continues to walk in the footsteps of Tom Clancy's vision.

Amazon Book Review: How did it come about that Tom Clancy's estate agreed to bring Jack Ryan to the small screen?

Carlton Cuse: Paramount had made five movies and everyone felt as a movie franchise it was sort of out of gas, but premium, streaming TV, where a Clancy story could be told across eight hours, seemed like an exciting way to do the most authentic version of the type of storytelling that Clancy did in his novels.

Clancy's Jack Ryan novels span decades, and Ryan himself takes on a number of different high-pressure jobs in the government. At what point in Jack Ryan's life is the TV show set?

My co-writer, Graham Roland, and I decided that the sweet spot to start our tale was with Jack Ryan having worked at the CIA for about four years at a desk as an analyst. Following some shady financial transactions, he gets on the trail of someone with the potential to be the biggest terrorist threat since Osama Bin Laden. This thrusts Jack out into the field for the very first time. Exploring that first experience of a guy used to being on a desk becoming an operative felt like really great story territory.

Clancy's books also sweep together a wide cast of characters. Are there characters in "Tom Clancy's Jack Ryan" that readers will recognize from the books?

The characters that are in Clancy's books that we use are Jack Ryan, James Greer and Cathy Mueller. Our show is sort of a prequel to the books. Jack has only been working for the CIA for four years in our story. James Greer is not a retired former admiral sitting in a seventh-floor CIA corner office; he's only one rung above Jack Ryan in the CIA hierarchy. Cathy Mueller, who is Jack's wife in the books, is someone he first meets in our story and they begin to date. All the other characters are original creations.

What challenges did you face in keeping true to the Jack Ryan whom people know from the books and various films, while at the same time making him fresh for today's viewers?

Clancy wrote these books a long time ago. They were geopolitical thrillers of the moment. We felt challenged to do the same. To tell a story with contemporary resonance. We felt like we had an incredible opportunity to tell a great story because we had eight hours. Clancy wrote big, sprawling 800-page books. They are not reducible to a two-hour movie. We felt with eight hours we could really tell on screen the type of story that Clancy told in his novels.

Clancy's books were written in a different time, with different geopolitical threats. How did you update the story to be relevant to today?

I read maybe eight of the Clancy novels growing up strictly as a fan and loved them. Tom Clancy's Jack Ryan is an original story but it adheres to what I believe made all the Clancy novels work: A classic, moral hero; a topical geopolitical storyline; authenticity; and mosaic storytelling where disparate characters come together in unexpected ways. There are a lot of problems out there in the world, but terrorism remains, in my opinion, the world's greatest existential threat.

A Crash Course in...
Read