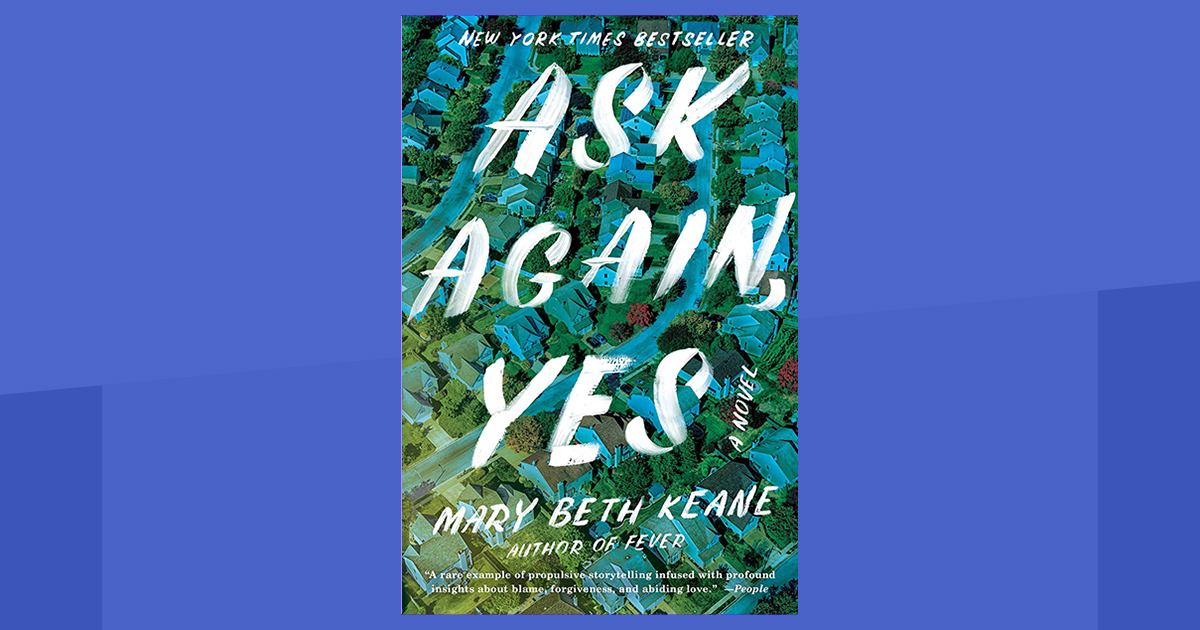 Mary Beth Keane's novel Ask Again, Yes was one of the breakout novels of 2019. We picked it as a Best Book of the Year and it debuted at #5 on the New York Times best seller list for hardcover fiction. Yesterday it was published in paperback, so we are rerunning our interview with the author.

This is a domestic novel about two families who wind up living next door to one another in the '70s. Both of the fathers, Francis and Brian, are cops working in the same precinct. They aren’t that close, but two of their children—Peter and Kate—develop a relationship. Peter and Kate provide the through line to the story, a line that is broken by a violent act. Eventually, they will reunite—but I'll stop there to avoid spoilers.

Mary Beth Keane's characters will inhabit your mind like real people, and you will find yourself thinking about them long after you have finished the book. In our discussion below, I learned that they also stick around in her mind.


Chris Schluep, Amazon Book Review: So, the first question I always ask is, How do you describe the book?

Mary Beth Keane: You know, that’s a surprisingly difficult question. But I describe it as a love story most often. I think of it as a love story—but not just for the younger generation (Peter and Kate). For the older generation, too—between Francis and Lena. That was the whole point from the beginning: to have a love story play all the way out. Not just end when people get together and Happily Ever After, but to see them ten years later and twenty years later. When they leave their dishes in the sink and they’re eying their neighbors, and things are not going so well. Do you still love each other? It’s still a love story; it’s just a more realistic one.

We haven’t all gotten to that point in our lives, our twilight years. What was it like to think about that? Was it hard to write?

No. In a way…. My mom says I’ve been basically forty since I was ten. So I think I’m able to… I mean I guess this is the whole deal, right? This is why people write. I think I’m able to imagine how people feel when I just put my head into it. Someone like Francis: I can imagine someone who is young and strong and good at his job, and doing a great job, and then being taken from it and the frustration you feel. I’ve often thought about it in my own home when things are complete chaos. There’s Spider-Man underwear on the kitchen table, and nobody can find their backpack, and the bus is outside, and everyone’s screaming at each other. One day it’s going to be quiet. Which is what I say I wish for. But when that day comes, I know I’ll be sad. So I think I was just able to imagine it that way.

Does it bother you when people call the book a domestic novel?

Because I described it that way in my review, but it’s more than that. I didn’t want to make it sound limited.

Any kind of description I guess feels a little reductive, but what else can people do? "Domestic novel" doesn’t bother me. That is what it is. Domesticity is really interesting to me. And capturing it in a way that’s interesting to readers was difficult, to be honest. So describing it that way feels accurate.

Do you start with characters or with plot? Where do you begin?

It’s interesting because these characters are so real—everyone agrees on that. You create so much empathy for them. I think they live on in a reader’s head. Do they live on in your head as well—when you’re done writing a book, are they still there?

Totally. Yes. Not just these, but other characters I’ve written. They become people you hang out with every single day. I actually saw a man on line at the pharmacy, and he was wearing this three-quarter-length leather blazer, and I thought, George would wear that. And then I was thinking about George for a while. But I do. I think about them a lot. The problem with this book was I kind of began with two. I could see Francis in his uniform in his rookie years, and not feeling totally comfortable about it—the sudden power that he had—and then I could also see Peter as a boy. And I knew that he wasn’t Francis’s son. So it took a while to figure out what these two people had to do with one another?

When did you know that Kate and Peter would get together?

I read somewhere that your agent didn’t love the original manuscript.

Yeah, I showed him an early version. It wasn’t a full draft. I think it was like a third. And he wasn’t into it. And one of the hardest things is figuring out when to listen to people and when to not listen to them. I felt like I was on to something, and if he wasn’t seeing it I didn’t know if that was just him or if it just wasn’t working. I do think that with this novel, the sum equals more than the parts. So if you could imagine only getting part one—you know, where is it going and what’s it about? I think it takes a little while for this novel to reveal itself. But I did revise. I completely tossed it twice. The first time I started it from Kate’s point of view, in the first person. And that just wasn’t working. And then structurally it changed a lot. I think I was interested in selling it early, probably because my friends sell their novels on partials, and my husband had lost a job at one point. But my agent was right. Waiting was better. And I think the way I write, it’s always going to be better to wait and be alone with it until I have a full draft that I feel good about and then show it. Yeah, this was a really tough one.

You were a 5 Under 35 author. I’ve always wondered, Does that help or does it add pressure?

It definitely helps. I think the brand of 5 Under 35 has gotten bigger since I got it. They kind of do fancier stuff now. It seems to be made a bigger deal. But yeah, they put a sticker on the book with National Book Foundation on it, which was just awesome. But really it’s a boost. It was crickets after my first novel, and I was just finishing my second. I think it was on submission, or it was about to be—so it felt really nice, like a clue from the universe, that I wasn’t on the wrong path. I did vow, though, at the time that if I was still crowing about 5 Under 35 when I’m 60, that things probably did not go as planned. So I feel like soon I have to stop talking about it, because I’m going to be 42 in July.

To be fair, it was my question.

I’m sure you’ve heard from a lot of readers about the book. What are they saying about it?

I’m getting a lot of personal emails from people about loved ones who have had mental illness in their lives. And it’s been really moving. I didn’t expect that. Describing mental illness was one of the things I guess I was most worried about, because even the same diagnosis in, say, five different people looks different in those five different people. And people feel really protective of their own experiences. Which I understand. So I was worried about that. And the fact that it’s going over well is a huge relief. I’m also, though, worried that I’ll encounter a person at a reading and they’ll say, oh, remember me, I sent you an email. And they’re so personal—but there have been quite a few—and I’m afraid I won’t be able to remember who the person is or what their story is on the spot and then maybe hurt their feelings.

I’ve also heard from a lot of spouses of cops, which is interesting. And they seem appreciative of portraying what it’s like to be at home. I guess a lot of the cop shows really only show police work on the job. But what it’s like for spouses to be home and sort of afraid, and the fact that a police officer can feel afraid, is something that doesn’t get—it sounds really simple—but it doesn’t get portrayed a lot.

Well, I’m stewing on an idea. It’s just so early, it doesn’t make sense to talk about it. But it’s a little bit of a puzzle because I’m talking about this book constantly lately. I don’t know how other people do it. Maybe I’m too simple minded, I can’t get my brain to switch tracks. And I’ve really been talking about this book since January [2019], since Winter Institute in Albuquerque. So I’m starting to worry about that. I know myself. I have a long stewing period, I guess. And I’m going to keep stewing all summer, but then I think I’m going to have a hard pullback on social media, and on talking about this book, so that I can protect the hours of the day to write this new book.

The Amazon editors talk to the best-selling author of "Ask Again, Yes." 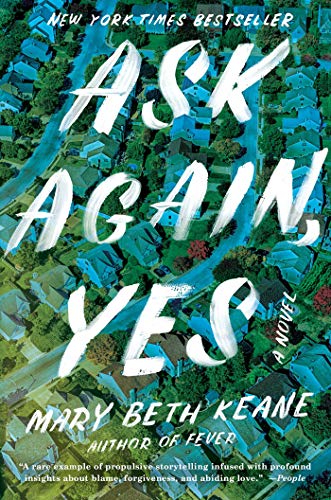