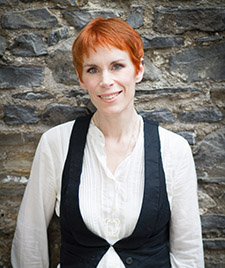 A new book by Tana French—the award-winning author of numerous bestselling thrillers including In the Woods, Broken Harbor, and The Secret Place—is always eagerly anticipated. Unlike those previous novels, The Witch Elm isn't narrated by a Dublin Murder Squad detective, but rather by Toby, a charming young man who always seems to have luck on his side. Toby’s life is forever altered after a home invasion at his apartment leaves him brutally beaten, his future uncertain. Who would do this to him, and why? That appears to be the story French is going to tell, but while Toby is convalescing at the family’s ancestral home, a human skull is discovered. The identity of the deceased leads back to a long-ago summer when Toby and his cousins lived at the house—and a whole new mystery begins to unfold. How well do we really know those closest to us? Or even ourselves? These are questions that French poses, and the answers are not as obvious as they might seem.

What has French been reading this year? See her picks and why she chose them below, and look here for more celebrity favorites. For even more recommendations, learn more about the Amazon Books Editors' picks for the Best Books of the Year.

In the 1870s, a group of men—and one woman—set out on a cattle drive from Texas to Montana. This is a vast, sprawling epic that intertwines all its plot lines perfectly and makes every character real. It’s fascinating and brutal and funny and moving, and it deserves its reputation as a masterpiece.

The Riddle of the Labyrinth: The Quest to Crack an Ancient Code by Margalit Fox

This is the story of the three people whose work led to the deciphering of Linear B, one of the scripts used in Minoan Crete. I’m a total geek for anything to do with ancient Greece or Minoan Crete, and this book is a beauty—a detective story that captures both the intellectual challenge and the sheer magic of reaching across time and finding a connection with long-gone civilizations. It makes you understand exactly why those three people threw so much of their lives into this mystery.

Midnight in the Garden of Good and Evil by John Berendt

I love books that take me into a different world. This nonfiction novel—part travelogue, part true-crime story—brings the city of Savannah to vivid life, with all its eccentricities, its elegance, its characters and secrets and savage undercurrents.