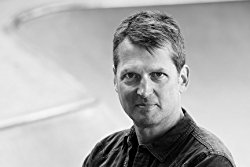 When Neal Thompson and his wife Mary welcomed their sons Leo and Sean into the world, they "wanted to raise them to explore, to take chances, to live." But then the boys hit their teens, and the love of skating their father had encouraged began to lead them down some "dark alleys." Faced with pot-smoking, rebellious kids, Neal wondered whether he and Mary had made the right choices. Were the boys somehow "insufficient," or were they "beautiful, vital young men, finding their way"?

Thompson, who had kept 20-some notebooks during his years as a father, decided to write about the family's experience—and if you've had children yourself, you'll find his memoir the best of company. "We were hardly alone," he writes. "That's what convinced me that our story, and theirs, was worth sharing. Despite all the risks."

Thompson is a longtime journalist and a colleague at Amazon, where he heads the Amazon Literary Partnership. His previous nonfiction books include a biography of Robert "Believe It Or Not" Ripley, and Driving with the Devil: Southern Moonshine, Detroit Wheels, and the Birth of NASCAR. But Kickflip Boys is his most personal to date, and he spoke to the Amazon Book Review about the challenges he faced in writing it, and in raising his lovable, good-hearted, and thoroughly human boys.

Sarah Harrison Smith: What led you to write Kickflip Boys?

Neal Thompson: Originally, I expected this, like my previous books, to be a journalistic nonfiction story that explored and exposed an overlooked subculture of American life. I thought I’d research the history and culture of skateboarding, then weave in bits of our family’s story and the role our kids’ passion for skateboarding played in our family lifestyle. But as my two sons got deeper into high school, and as I learned more about what it really meant to be a skater, the story kept getting more complicated, and more personal, veering closer to memoir, even if I shied away from using that word. 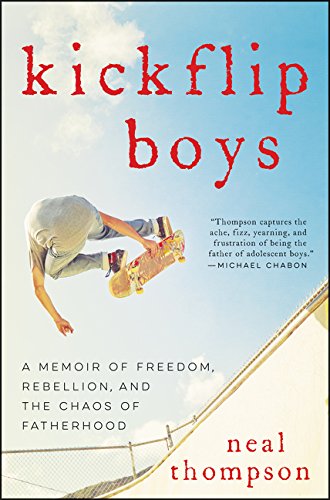 Kickflip Boys: A Memoir of Freedom, Rebellion, and the Chaos of Fatherhood

At first, writing about the rough patches—my kids’ search for freedom, their gleeful embrace of the defiant skater attitude—felt like therapy. I needed to revisit those episodes, to try and understand what happened and why. Then it began to feel like a story other parents might find useful. I thought, Maybe there are other dads who felt vulnerable and flawed, and maybe they’d feel less alone if they read about another dad slogging his way through the chaos of fatherhood. The more personal the story got, the more real it felt.

What was your sons’ perspective on the book?

I can’t say they embraced it. They had signed on at the start, but once the story delved further into the darker bits of our family experience—the skipped classes, the confrontations with teachers, security guards, and cops, the drinking and drugs and graffiti and more—they got nervous. Understandably so. I would ask them to share their memory of some incident, and they’d growl, “Oh, no.... You’re not going to write about that, are you?”

I’m so grateful that they allowed me to go as far as I did. Still, there were numerous, painful editing and negotiating sessions. And I have pages and pages of manuscript, marked up by my boys in Sharpie, with thick X’s and “No, No, No!” that they insisted remain on the cutting room floor. But now that they’re a bit older—20 and 21, both doing great—I think they’re a little more comfortable with it. Not that they’ll be hosting book club discussions any time soon. But we’re in a good place.

What parenting style were you and your wife, Mary, raised with? How did that approach inform your own parenting?

We were both raised in the '70s, in suburbia, at a time when mom and dad’s technique was to let their kids roam and be free. There was no helicoptering or tiger parenting in our households. My brother and I exploited that, and in the book I explore my own stupid escapades as a willful teen boy. Still, we tried to raise our kids with a similar amount of independence, believing they needed to find their own way. And the skateboarding absolutely stoked that sense of freedom and self-exploraion, often to the extreme. So we learned along the way that there were limits to free-range parenting.

At times we worried that we were too hands-off. Other times we tried to compensate, to rein them back in and hold them tighter. We found our tactics shifting constantly, and found that the things that mattered most were family routines (like family dinners), talking to them (even when they didn’t want to talk), and mainly letting them know they were loved. As I write in the book, what saved us as a family was that we loved each other, we said it and meant it, even as teen angst and imperfect parenting swirled around us.

What are you most proud of, as a parent?

We never gave up on our kids, and never let them give up on themselves. I believe that allowing them fully to explore their passions, even as their gritty sport and lifestyle led them down some dark alleys (literally and figuratively), developed in them resilience and independence. I can’t claim we got everything right. That’s basically the premise of the book. But we did teach them about right and wrong, about asking questions and thinking for themselves. And I’m proud that they’ve grown into thoughtful young men with a sense of justice and honesty and purpose. In the book I describe my wife and I having dinner with another writer, who asked if she wished things had gone down differently. “No!” she snapped. “I wouldn’t want them to be anyone else.”

What books helped you as a parent? Were there parenting books, per se, or other genres that shed light on the challenges?

I developed a complicated relationship with books about parenting, even as I obsessively collected dozens of them (mainly thanks to my job at the time as a reviewer for Amazon). I kept looking for tips and clues, but often felt scolded by these books about boys, teens, and drugs. I read books like Surviving Your Child’s Adolescence, The Secrets of Happy Families, The Smartest Kids in the World, All Joy and No Fun, Masterminds and Wingmen, The Wonder of Boys, Raising Cain, The War Against Boys, Parenting Teens with Love and Logic, The Teenage Brain, and my least favorite title, Do Fathers Matter?

Even my kids wondered what I was looking for. I found a note inside one of those books, from my eldest, which read: “STOP READING BOOKS ON HOW TO RAISE ME!” In time I learned that memoirs helped me and shaped me—as a father, a person, a writer—more than any of the self-help or parenting advice books. David Sheff’s Beautiful Boy, Cheryl Strayed’s Wild, Darin Strauss’s Half a Life, Elizabeth Gilbert’s Eat, Pray, Love, Tobias Wolfe’s This Boy’s Life and all of Mary Karr’s books … these became my comfort books. They showed me that all of us are flawed, as kids and as parents, but that life is long (if we’re lucky) and that people change and that patience and love are the best parenting tools.

Thank you so much, Neal Thompson.