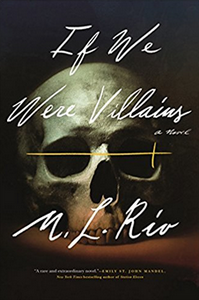 Some of you are answering, who cares? But whether you're a Shakespeare fan or not, there's a very good chance you will enjoy M.L. Rio's page-turning debut mystery, If We Were Villains. It opens with Oliver Marks, a former Shakespearean actor at an arts school, who is finishing a 10-year prison sentence for murder. But the detective who arrested Marks is still troubled by the dubious circumstances surrounding the crime, and wants to know the truth. Was Marks even responsible? Or was it one of the other actors, so in thrall with the Bard's words that the lines between reality and fiction blurred, with deadly consequences? Here, Ms. Rio explains "Uncle Bill's" brief cameo in the novel, and she issues a warning to anyone out there who doubts that he existed (methinks she doth chide, but just in case, mind your noses).

I’ve been on a first-name basis with Shakespeare for some time now. He’s ceased to be Shakespeare or the Bard or even William. By now he’s just Uncle Bill. Presumptuous? Perhaps, but this is what happens when you spend fifteen years up to your eyeballs in a single playwright’s work. You start to think you know him. But the fact of the matter is we hardly know anything about Shakespeare at all. We have some basic biographical data: the year he was born, the year he died, the names of his wife and children. The bigger pieces of his person—what made Shakespeare Shakespeare—are conspicuously absent from our records. We don’t know what made him want to be a playwright. We don’t know which god he may have worshipped, whom his friends might have been, where in the world he might have traveled. We don’t even know how he got himself to London from Stratford in the first place.

We actually know so little about Shakespeare that a whole cult of conspiracy theorists has sprung up around the question of whether there even was a man called William Shakespeare, or if that might simply be a pseudonym for someone richer/better educated/more important. (This is known as the ‘authorship question.’) The ‘real’ Shakespeare has been identified as everyone from Christopher Marlowe to Sir Francis Bacon. Any academic worth their salt will tell you the supporting evidence is weak, and that these theories range from “wildly improbable” to “literally impossible.” For example: Edward de Vere, 17th Earl of Oxford—by far the most popular candidate for the “Real Shakespeare” mantle—died in 1604, before some of the major works (Macbeth, Antony and Cleopatra, and The Tempest, just to name a few) were even written. That, somehow, hasn’t stopped the anti-Stratfordians from recruiting such illustrious persons as Sigmund Freud and Derek Jacobi to their camp. These theories are shockingly (and annoyingly) widespread. Roland Emmerich spent millions of dollars making a (dreadful) movie about it. Goodreads reviews of Shakespeare’s plays are littered with vitriolic rants about how Shakespeare shouldn’t be taking the credit for the plays if he didn’t write them. (Really.) Probably 70% of the time I have reason to tell someone I have a master’s degree in Shakespeare, or that I wrote a book about Shakespeare, they respond with a wink and a nudge and the question, “So, did he really write the plays?”

The short answer is yes. Yes, he did, and the next person who asks me about it is getting their nose broken with my heaviest edition of the Complete Works. 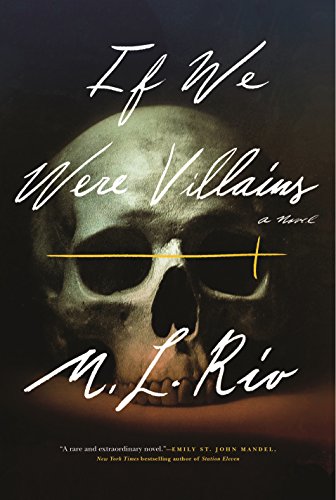 If We Were Villains

Because I’ve been getting some version of this question roughly once a week for roughly fifteen years, it’s honestly a miracle I haven’t broken anyone’s nose over it. I can’t quite explain why I get so riled up about it. Every time someone asks if Shakespeare was really Shakespeare, it’s like they’re asking if my dad is really my dad. It’s like they’re questioning an intrinsic piece of my identity. Of course, you could make the argument that being so possessive of a dead playwright is just as crazy as some of the conspiracy theories.

And yet, Shakespeare the man appears only once in If We Were Villains, the 300-page novel I wrote about Shakespeare. “He lived with us like an eighth housemate,” the narrator remarks, “an older, wiser friend, perpetually out of sight but never out of mind, as if he had just left the room.” This is another thing I get a lot of questions about. Why write a book riddled with Shakespearean plots and archetypes, and quotations, and then only bring Uncle Bill himself into it in this fleeting moment? I think it’s because, to me, Shakespeare is his words. He is Macbeth, and Brutus, and Juliet, and Lear. He is “To be or not to be?” and “Shall I compare thee to a summer’s day?” He is a tragic villain and a star-crossed lover and the king of the fairies. He is comedy and tragedy, high art and low humor. He is the most brilliant wordsmith the world will ever know. Without his words, would anybody care where he grew up or whom he married or whether he spelled his name six different ways? Somehow I doubt it.

Nobody will ever convince me that Shakespeare wasn’t Shakespeare—actor, playwright, son of a glovemaker. Father, husband, poet. We may never have real proof that he was anything else. But none of that minutiae and mystery will ever matter as much as what he wrote. In Love’s Labours Lost Armado says, “Devise, wit; write, pen: for I am whole volumes in folio.” When I think of Uncle Bill, I don’t think of the balding man with the gold earring made famous by the Chandos portrait (which actually may not even be a portrait of Shakespeare; that’s how little we know). I think of 30-odd plays and 100-some sonnets and a handful of other poems. I think of Hamlet and Helen of Troy and 400 years of theatre. I think of operas and teen movies and dozens of novels—including my own—inspired by his work. And when I think of all that, I wonder, why would we need anything more?

If We Were Villains
M.L. Rio
Print Book Kindle Book

"The Devil Was Stand...
Read