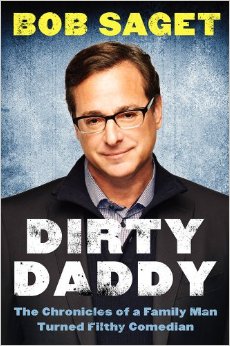 You've likely seen actor/comedian Bob Saget on TV. Question is, which Bob Saget did you see? The family-friendly Saget of "Full House" and "America's Funniest Home Videos" fame is oh-so-different from the potty-mouthed button pusher who cameo-ed as a misogynist neighbor on "Entourage" and a drug-addicted actor on"Huff," appeared in the blue comedy documentary The Aristocrats, and starred in his own HBO stand-up special "That Ain't Right."

Now, as an author, Saget has written a bridge between his two extreme personas with Dirty Daddy: The Chronicles of a Family Man Turned Filthy Comedian, one of our April Best of the Month selections in Humor & Entertainment.

Characteristically tangential, in Dirty Daddy Saget jumps from endearingly genuine to sophomorically silly to jarringly vulgar without warning. Somehow, between the exasperated "Oh, Bob"s, the heartwarming "Awwww"s, the head-nodding "Right on..."s, and the cringe-worthy "Ew, really!??"s, we get to know him from his own tainted perspective. He shares a behind-the-scenes look at "Full House," name-drops comedians who influenced him (Rodney Dangerfield, Richard Pryor) and random celebrities he's encountered (Quentin Tarrantino, Jimmy Stewart), remembers career milestones like his first time on The Tonight Show. He also drags his family into it, discussing relationships with his mother, grandmother, sisters, and kids.

But we wanted to know Bob Saget, Debut Author a bit better. So, we presented him with our favorite questions and begged him to keep the answers "printable." What we got back was (with a couple of exceptions), surprisingly sweet.

What's the elevator pitch for your book?

It doesn't take long to explain, but before I'd go into an elevator to pitch it, I'm basically the kid who'd push the button on every floor to make sure they're a captive audience.

Dirty Daddy is about how the different aspects of my life have intersected. How I became what some people consider a "dirty" comedian, when all I've ever done is try to entertain my way through a life that often has a huge amount of heaviness in it. The book is about loss, survival, the love of comedy, and my testicles.

A stack of several books I've yet to read, a few DVDs I've yet to watch, and a tiny cheesy alarm clock that's had the same miniature battery in it for ten years. It's outlived my last three relationships.

Top 3-5 favorite books of all time?

The Grapes of Wrath, Of Mice and Men, Jitterbug Perfume

Book that changed your life?

Book that made you want to become a writer?

What's your most memorable author moment?

Writing for 48 hours straight with no sleep to meet a deadline. Most Adaptation-like moment I'd prefer never to repeat in my life if possible.

I will always prefer a hardback book, but I'm drawn to digital because it's so easy to acquire them when I'm having a need-to-read moment.

What talent or superpower would you like to have (not including flight or invisibility)?

I'd be really happy to be able to stretch myself to be as wide or narrow as I felt like being at the moment. Take up the whole doorway, or be able to slide myself under it. You asked.

What are you obsessed with now?

At the moment, the fantasy of being able to stretch myself as wide as a doorway, or be able to slide myself under it.

What are you stressed about now?

The state of the world. How desensitized we have become as people. How much we have to do to help this planet and its population. I am also stressed because once I am flattened out so thin to be able to slide under a doorway, I may never be able to ever be unflattened so I could be regular sized again.

What are you psyched about now?

The future. I have no plan except to take care of the people I love. I have no agenda, nothing to control. I'm psyched about what I can contribute that can be meaningful to myself and to others. I'm also looking forward to one day meeting a person has that same non-agenda. In the creative sense, I'm looking forward to collaborating with people I have mutual respect for to create some really good work. In the immediate sense, I'd like a nice piece of salmon that's not too pink inside and yet isn't too dry or crisp either. Nothing worse than a piece of dried out fish.

What's your most prized/treasured possession?

A pair of leather lace-less high-top All Stars my daughters gave me two birthdays ago. They're always coming apart at the sole, but I will keep repairing them until the end of time because they mean so much to me.

Mary Karr, author of The Liar's Club and Lit. I love her unabashed honesty and conviction to everything she believes in.

The World According to Garp. I was influenced by its fascinating and funny characters along with what could be deemed absurd with stream of conscious story lines that somehow made its whole world seem entirely possible.

What's the last dream you remember?

My mom, who we lost a few months back, came to me and the basic info imparted was-- everything was going to be alright; she was so proud of me; that the book was going to be received well by a lot of people. She told me how much she loved me seemed to infer I was going to find some new healthy romance--that she would not be involved with from the other side in any meddling fashion. Finally, some Freudian Relief.

My favorite procrastination is to make the choice to have valuable times with human beings that I care about instead of holing myself up alone to get my work done. The conflict is the temptation to get the omnipresent assignment completed. The selfish and usually pointless approach is to try to get both done simultaneously--accomplish your work at hand while begging forgiveness of those close to you while you're basically working in front of them during what could've been specifically 'quality time.' The favorite method of vice is to diss all responsibility be work or social, go off by myself, and enjoy a good steak and a great glass of wine. Oh yeah, and my kids are there too.

What do you collect?

Sweet desk items my daughters buy me. Could be a plastic necklace, or a felt pen with a face dressed in a Christmas hat. Also enjoy a good glass pyramid to store my deepest wishes and dreams in. My favorite collections are gifts from my daughters that come from them knowing me, and knowing what items give me focus and meaning, There's a ceramic tiny ant eater or similar creature sitting my desk named "Pushkin." He's not named after the Russian Poet. If anything he is a mockery of anyone else ever named "Pushkin." I like him very much.

Best piece of fan mail you ever got?

The one (and there were several) from a young girl who thanked me for being part of "Full House" because her childhood was similar to the one depicted in that sitcom I was the father in. She said it was the only show she could watch with her dad, since she'd lost her mom, that they could sit and talk about their feelings after. She credits a show made for exactly her, a teenage girl audience--helping her get through how hard it was to live without her mother in her life.

Favorite line in a book?

Part of Tom Joad's speech from The Grapes of Wrath. It's lengthy but I think of it often:

Tom: "Then it don't matter. I'll be all around in the dark--I'll be everywhere. Wherever you can look – wherever there's a fight, so hungry people can eat, I'll be there. Wherever there's a cop beatin' up a guy, I'll be there. I'll be in the way guys yell when they're mad. I'll be in the way kids laugh when they're hungry and they know supper's ready, and when the people are eatin' the stuff they raise and livin' in the houses they build --I'll be there, too."

What's next for you?

A Peek Inside "What...
Read