Cathleen Schine on "The Grammarians" 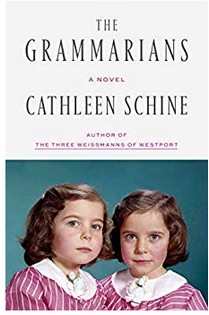 In Cathleen Schine's, The Grammarians, two sisters’ infatuation with language is what bonds them…until it doesn’t, leading to a literal war of words when they find themselves fighting for ownership of the family dictionary. Here, Schine speaks of her status as an unapologetic logomaniac, and how that informed the writing of this delightfully comic novel.

Like any reader, and certainly any writer, I love words. There is the art of the word, how skillfully and thoughtfully a word is used, how its sound is blended with the sounds of its fellows, how its meaning is obscured or teased or brightened by the words that come before it and after it. There is also the nature of the word, its history, its life on earth, its growth and evolution. The Grammarians is about identical twin sisters who are even more enamored of words than I am. As children, they play games with words as if each word were a toy. They collect words, interesting words, odd ones, like fugacious and gloze. They like the sound of those words and so do I. Choosing the words from Samuel Johnson’s Dictionary to head each chapter was one of the most enjoyable parts of writing The Grammarians. There is a complete digital version of Johnson’s dictionary on line, and I spent many delightful hours exploring it. I wanted words that told me something about the section to follow, and sometimes it was only when I found the exact right word that I really knew what the section, which I’d already written, mind you, was about. I also wanted obscure and surprising words and definitions, words that resonated as words alone as well as resonating with meaning. So the whole search was like a kind of approved procrastinating. Oh, it was wonderful. I wish I had to do it for every book.

I remember as a child agonizing over my box of Crayola crayons trying to decide which was my favorite color – the pale, grassy green or the super saturated yellow? Or blue, plain old blue? I think I chose green, though I periodically had to reevaluate. But I did not have a favorite word until I studied Latin in high school. It was: egregious. Which comes from ex, meaning out of, and gregius, flock. Outside the flock. The word has everything I love about the possibilities of words. The literal and visual impact: a sheep! Standing by itself away from its flock! Why is it there? Because it’s special? That was the original meaning in Latin. Illustrious, outstanding. Or is it a sheep that has been banished by the other sheep because it shocked them in some way? Because it is a jerk of a sheep, an offensive sheep ? That’s the meaning now. I often think about that wooly ruminant. How jarring, to stand in a meadow quietly nibbling the sweet, green grass, minding its own sheepy business for thousands of years while human beings pass by and gaze with admiration which, as the millenia pass, turns into disdain through no fault of the lone, placidly munching sheep. You know, sheep is an interesting word, now that I think of it. There is sheepish, which is rather sweet, a sheepish grin…But then there is sheeplike, which is pathetic. And what about pathetic? From Greek. Originally meant capable of arousing pity. Now it is an insult. Insult! Excellent word from the Latin meaning to jump or trample on!

All of which brings us to the problem (and the glory) of words: one just leads to another.