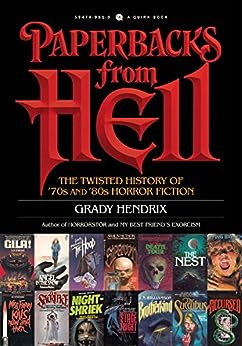 In my first bookstore gig, a long time ago, one of my first responsibilities was “managing” the horror section. I was perfectly suited for this task. For one, I’d been reading horror novels since I was 12, starting with 'Salem's Lot before branching out with the likes of H.P. Lovecraft, Ramsey Campbell, and Richard Matheson. Second, I found the section hilarious, with nearly every book featuring a grinning skull, sunken-or-glowing-eyed child, or ventriloquist’s dummy on its tuxedo-black cover. In fact, before I worked there, I performed the “service” of merchandising the titles according to themes. For example, all titles with Satanic dogs would be faced out. I did this for free. I was shiftless, bored, and probably annoying. Not like now.

Grady Hendrix has done something similar with Paperbacks from Hell: The Twisted History of '70s and '80s Horror Fiction, which is what must be the definitive-for-all-time survey of mass market horror. Accompanying his funny and thoughtful commentary, hundreds of titles are summarized, critiqued, and conveniently organized by subject matter. It can't have been easy, but Hendrix - author of Horrorstör, an IKEA-inspired ghost story - is no stranger to the eldritch, and he's up to the task. Where does one file Rabid, wherein "a small dog moves into a loving home and a living bomb explodes in madness, agony, and death!"? That goes in Chapter Three, "When Animals Attack," along with Satan's Pets, Squelch (caterpillar horror), and Crabs: The Human Sacrifice. Other rubrics include "Creepy Kids," "Real Estate Nightmares," and "Inhumanoids."

It's not all kitsch. Sure, The Farm - with its menagerie of killer cats, rabbits, and geese - is amusing, and it probably doesn't belong on any shelf next to Orwell. But there's a lot of classic stuff here, too. If you weren't familiar with Shirley Jackson's We Have Always Lived in the Castle - an abstract and ambiguous exercise in neurosis that might fit somewhere within the Hitchcockian or Lynchian universes - you might expect, given what might be interpreted as a demonic wolf-woman on jacket, a pulpier reading experience. Likewise books by Anne Rivers Siddons, Ray Bradbury, and other "respectable" writers; their inclusion is a nod to the genre's (occasional) higher aspirations and richer-than-you-think past.

But let's be straight: Most of this is pulp, much of it now literally so. The history is entertaining, but the jackets make the book. There was one sacrosanct rule for the artists (and writers and publishers): Never be boring; all others were broken, or at least warped. Enjoy these covers from a bygone, not exactly innocent era, along with Hendrix's introduction from the book.

Introduction to Paperbacks from Hell by Grady Hendrix 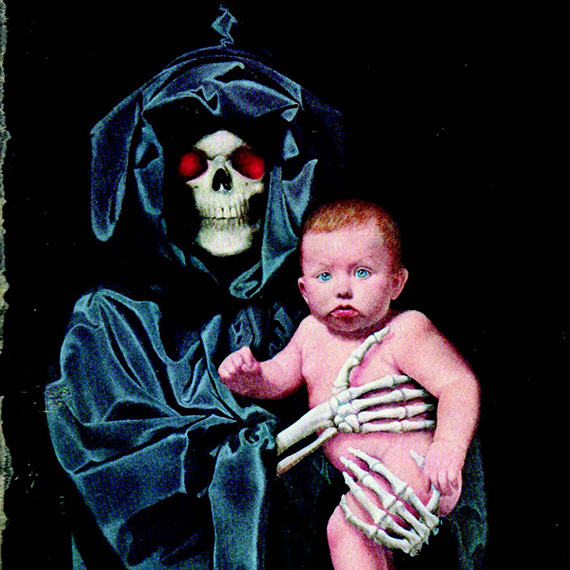 Years ago at a science-fiction convention, I was flipping through the dollar boxes at a dealer’s table when this Hector Garrido cover for The Little People brought my eyeballs to a screeching halt. I wasn’t a book collector—I didn’t even know who Hector Garrido was—but I knew what this was: the Mona Lisa of paperback covers. I bought it so fast my fingers blistered. I never expected to actually read the book . . . but three months later, I fished it out of my “To Be Read” pile and cracked it open.

I knew John Christopher’s name from his Tripods science-fiction series, which ad been serialized as a comic strip in the back of Boys’ Life magazine. But this 1966 Avon novel was stronger stuff. In it, a gorgeous secretary inherits an Irish castle from a distant relative and converts it into a B&B to show her patronizing lawyer/fiance that she can stand on her own. On opening weekend, the house is full of guests: an Irish dreamboat alcoholic, two bickering Americans with a hot-to-trot teenage daughter, and a married couple who met in a concentration camp, where he was a guard and she was a prisoner. 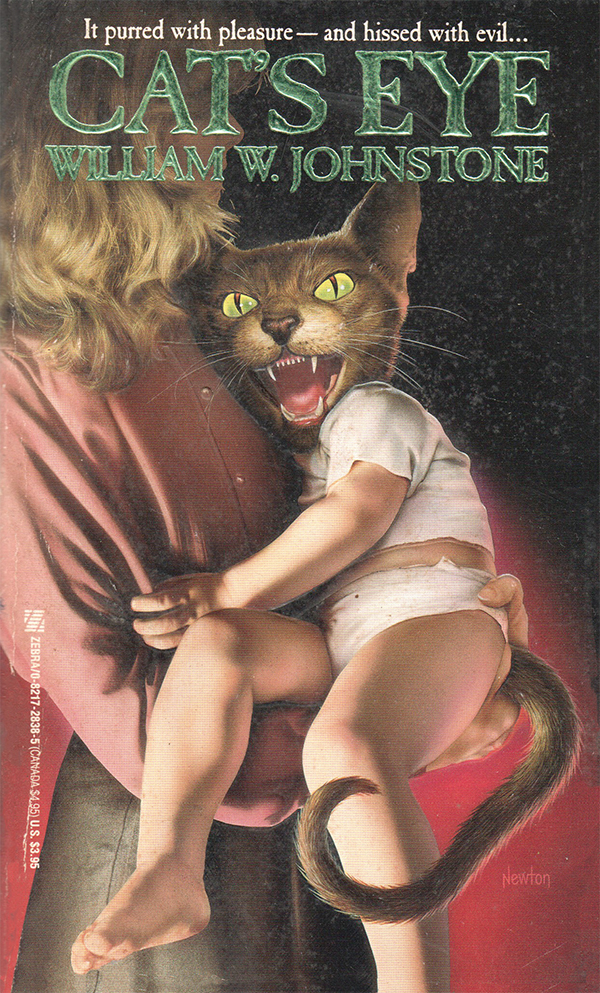 But some uninvited guests are lurking in the basement: the Gestapochauns. The Gestapochauns live in the dark, battling their ancient rat enemies with teeny bullwhips. Shortly after we meet them, the author lets us know that these are not just any Nazi leprechauns. These are psychic Nazi leprechauns who enjoy S&M, are covered with scars from pleasure/pain sessions with their creator, were trained as sex slaves for full-sized human men, and are actually stunted fetuses taken from Jewish concentration camp victims. And one of them is named Adolph.

While all this information is being hosed into the reader’s eyes like a geyser of crazy, this book rockets from 0 to 60 on the loony meter and overdelivers on practically every level. From the moment the Gestapochauns play a mean practical joke on the old Irish washerwoman who works in the kitchen to the moment that the lawyer/fiance realizes exactly what the Nazi leprechaun named Greta is up to in his pants, it’s one fifty-page freakout that’s firing on every cylinder. 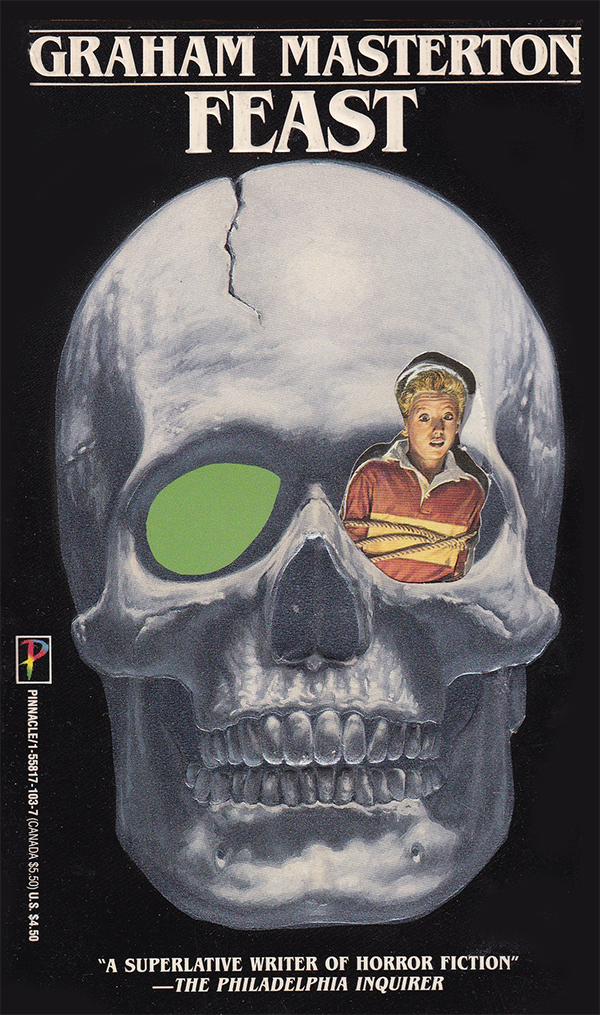 Cover by Bob Larkin from Feast by Graham Masterton, Pinnacle, 1988

Sadly, the Gestapochauns are completely absent from the last thirty pages of the book. The author devoted the remaining pages to a discrete psychic battle that takes place in the dreams of the non-psychic, non-Nazi, non-leprechaun members of the cast. In other words, the Boring People. Yet Christopher and his Gestapochauns fly so high and so far in those middle passages that they practically touch the sun.

No matter what book I read next, the Gestaopchauns clung to my gray folds, whispering to me in my sleep: What else has been forgotten? After some late-night googling brought me to Will Errickson’s Too Much Horror Fiction blog, I blacked out. One year later, I woke up squatting in the middle of an aisle at Sullivan’s Trade-a-Book in the heart of South Carolina, surrounded by piles of musty horror paperbacks. Apparently I was buying them. Apparently I was reading them. Apparently I was addicted. 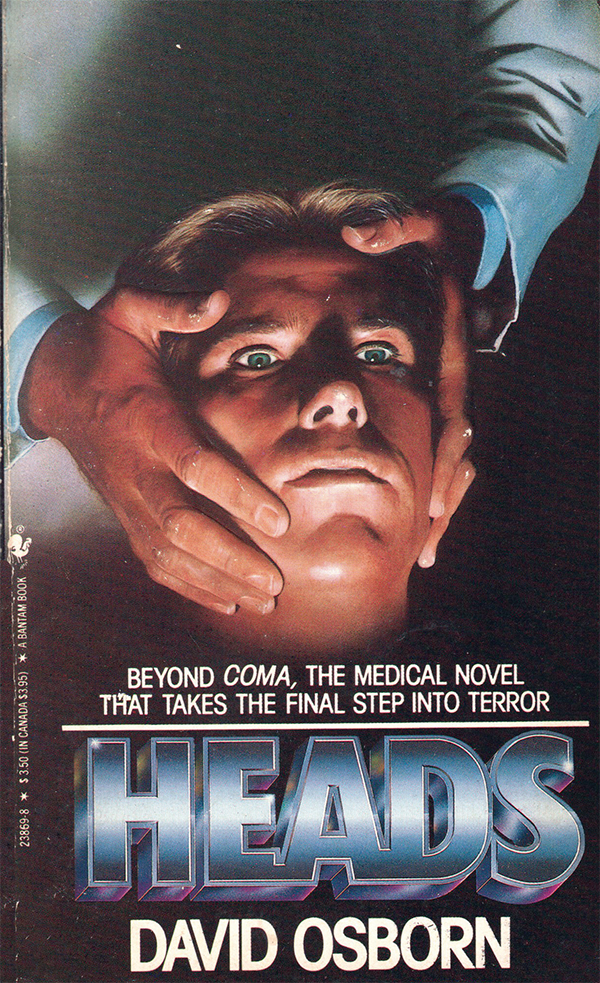 Cover by Richard Newton from Heads by David Osborn, Bantam, 1985

The books I love were published during the horror paperback boom that started in the late ’60s, after Rosemary’s Baby hit the big time. Their reign of terror ended in the early ’90s, after the success of Silence of the Lambs convinced marketing departments to scrape the word horror off spines and glue on the word thriller instead. Like The Little People, these books had their flaws, but they offered such wonders. When’s the last time you read about Jewish monster brides, sex witches from the fourth dimension, flesh-eating moths, homicidal mimes, or golems stalking Long Island? Divorced from current trends in publishing, these out-of-print paperbacks feel like a breath of fresh air. Get ready to meet some of my new favorite writers: Elizabeth Engstrom. Joan Samson. Bari Wood. The Lovecraftian apocalypse of Brian McNaughton. The deeply strange alternate universe of William W. Johnstone. Brenda Brown Canary, whose The Voice of the Clown is one of the few books to actually make my jaw drop. You’ll hear the dark whisperings of Ken Greenhall, the gothic Southern twang of Michael McDowell, the clipped British accent of James Herbert, the visionary chants of Kathe Koja, and the clinical drone of Michael Blumlein. 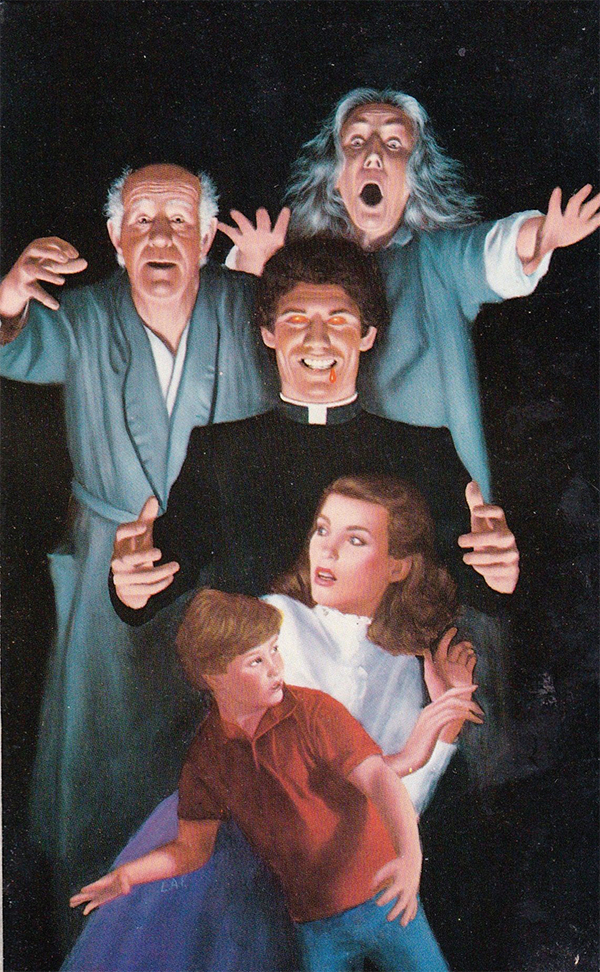 The book you’re holding is a road map to the horror Narnia I found hidden in the darkest recesses of remote bookstores—a weird, wild, wonderful world that feels totally alien today, and not just because of the trainloads of killer clowns. In these books from the ’70s and ’80s, doctors swap smokes with patients while going over their ultrasounds, housewives are diagnosed as having “too much imagination,” African Americans are sometimes called “negroes,” and parents swoon in terror at the suggestion that they have a “test tube baby.”

These books, written to be sold in drugstores and supermarkets, weren’t worried about causing offense and possess a jocular, straightforward, “let’s get it on” attitude toward sex. Many were published before the AIDS epidemic, at the height of the Swinging ’70s, and they’re unapologetic about the idea that adults don’t need much of an excuse to take off their clothes and hop into bed. 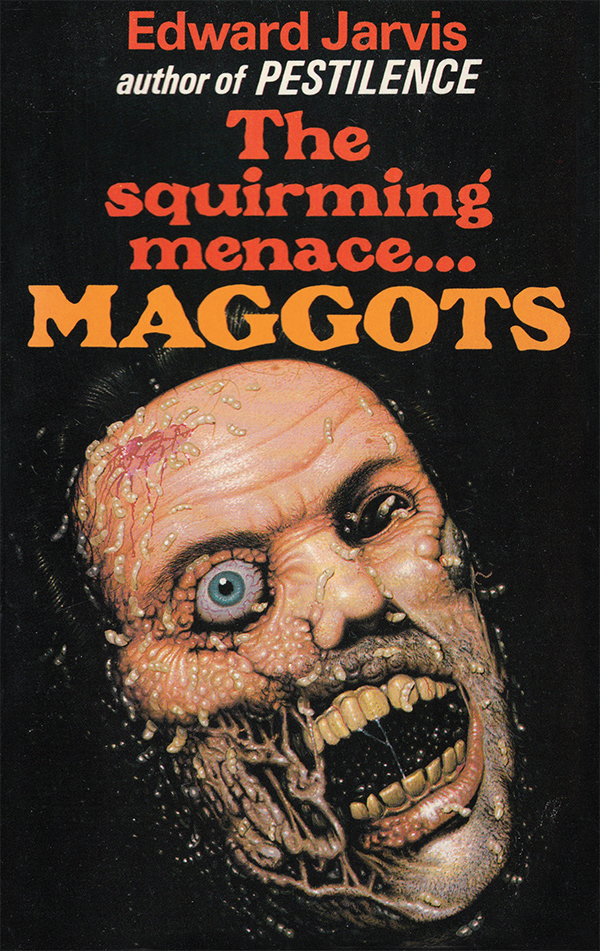 Cover by Terry Oakes from Maggots by Edward Jarvis, Arrow, 1986

Though they may be consigned to dusty dollar boxes, these stories are timeless in the way that truly matters: they will not bore you. Thrown into the rough-and-tumble marketplace, the writers learned they had to earn every reader’s attention. And so they delivered books that move, hit hard, take risks, go for broke. It’s not just the covers that hook your eyeballs. It’s the writing, which respects no rules except one: always be interesting.

So grab a flashlight and come wander down these dark aisles. The shelves are dusty, the lighting is dim, and there’s no guarantee you’ll come back unchanged or come back at all. All you need is a map and you’re ready to take a tour of the paperbacks from hell. 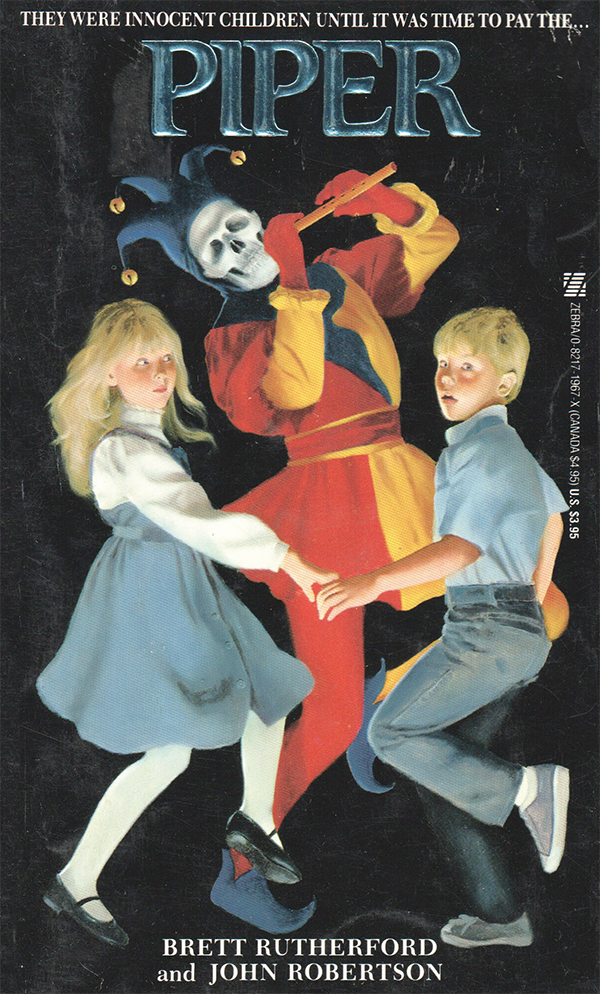