A Q&A with Mesha Maren on "Sugar Run" 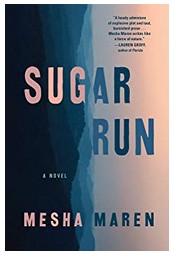 Jodi McCarty just can’t catch a break. Fresh out a 18-year stint in prison, for a mysterious crime we learn about as the story unfolds, she is eager to return to her slice of Shangri-La in the Appalachian Mountains. But first she takes a detour that, however well-meaning, ends up threatening to throw her aim of staying on the straight and narrow off course. Mesha Maren packs a lot into Sugar Run, a Southern noir that follows our heroine’s dogged attempts to rebuild her life, efforts that are stymied by things both outside and inside her control (for starters, the woman has woefully terrible taste in romantic partners). Maren writes beautifully and with keen insight, but what makes this debut truly special is her ability to engender compassion in deeply flawed characters; that’s the power of good fiction.

Ms. Maren recently took time out of her busy schedule to answer a handful of questions for us about her debut novel:

Erin Kodicek: Appalachia is practically a character in Sugar Run—your love of the Mountain State oozes off the page, but at the same time you don’t shy away from showing its seamier side. What is your connection to that area?

Mesha Maren: I grew up on a farm on top of Muddy Creek Mountain in Greenbrier County West Virginia. I love Appalachia more than anything and I wouldn’t want to live anywhere else but it has never been a particularly easy place to live. I think this conundrum was summed up pretty well by an early pioneer who, upon seeing what would become West Virginia for the first time wrote “It was a pleasing tho’ dreadful sight to see mountains and hills as if piled one upon another.” The geography itself has always made West Virginia a place apart and that is why it is so amazing and so difficult. It’s easy to enjoy the beauty of the sun setting behind the blue ridges, but it’s hard to live in a state where the politicians value the profits from extractive industries over human lives and it’s hard to live in a town where the only jobs pay minimum wage and when your neighbor overdoses, the hospital is an hour away.

They say good fiction can increase one’s empathy and Sugar Run is a good example of that. Here you have Jodi, she has paid her debt to society, she wants to rebuild her life, but her status as a former convict, for one thing, frustrates her efforts to stay on the straight and narrow. What do you hope readers take away from what seems to be a pretty bleak, systemic problem?

When I write fiction I never have a set idea of “what I hope readers take away.” That just isn’t how fiction works for me as a a reader or a writer. If I set out with a thesis then my writing would be stunted because I would be focused on trying to graft it around a point I was trying to prove. I think social novels had their place and time (like Steinbeck’s Grapes of Wrath for example) but that’s not what I’m doing in my fiction writing. That said though, the facts of Jodi’s life (how she was sentenced as a minor and then unable to find work after being released, etc.) are all based on reality, I crafted those details out of real-life research that I did, talking to incarcerated and formerly incarcerated folks. And if, after reading Sugar Run, someone feels more empathy towards incarcerated and formerly incarcerated folks in real life that would be awesome. I had one reader email me and say that she had never met anyone “irl” who had lived a life like Jodi’s before but she empathized and identified with Jodi’s thoughts and emotions after reading the book. I thought that was pretty cool. If the novel makes you think about class issues that’s great.

One other thing that poses challenges for Jodi is her sexuality, and that is where place also plays a role. But more than personal safety, Jodi struggles with internalized shame; not embracing who she needles at her in a profound way. Is Sugar Run a kind of cautionary tale in that way?

I definitely don’t see Sugar Run as a cautionary tale at all. I think that is more in the realm of what social novels do, like I talked about above. I did purposefully lean into her own self-doubts though and her self-hatred in terms of her identity and her sometimes unwillingness to talk to the people around her about her love for Miranda and Paula. I layered that in there because I think sometimes that there is such a push for positive role models in books and movies, like we’re only allowed to write queer characters if they are fully self-loving and proud and out there with their rainbow flags flying and that is just not the reality for a lot of rural folks and that does not make us any less queer or any less important. It is great to have awesome role models in real life but fiction isn’t for role model building, fiction is doing something much more complicated and deeper than that. When I read James Baldwin’s Giovanni’s Room as a nineteen-year-old that book exploded my heart and brain in the best way and the queer characters in that book are by no means good role models. I sometimes wonder if Baldwin published that book now, if he even could publish it, what people would say. Twitter would tear him a new asshole for how he dives deep into queer self-hate and internalized homophobia.

The criminal justice system, drug abuse, homophobia, fracking, family drama…These are all heavy, thorny topics that could easily overwhelm a narrative, but that’s not the case with Sugar Run. How did you calibrate the pacing, and the emotion, so that none of the these issues get lost/buried?

This relates to what I was talking about before, about not having a thesis or any idea of “what I hope readers take away.” My writing process is all about character and image. I feel a character start flickering around in my brain, he/she starts talking to me at odd times and ghosting around my mind and I eventually start writing down lines in a notebook. I also often begin with images: a curtain blowing in the wind, ice cubes melting in a glass, a piece of blue glass at the bottom of a swimming pool and at first I only have that image and then I have to dial the scene out, like zoom out and ask myself what else is happening in that scene? The whole process of writing the novel is for me a kind of reverse zooming, I begin really small and close and then zoom out out out until I have the full picture.

It seems like everyone is selling movie rights these days and Sugar Run does have a cinematic quality to it. Will it be adapted for the big screen?

All I can say is that I’m in conversation with some studios right now.

Big Books on the...
Read