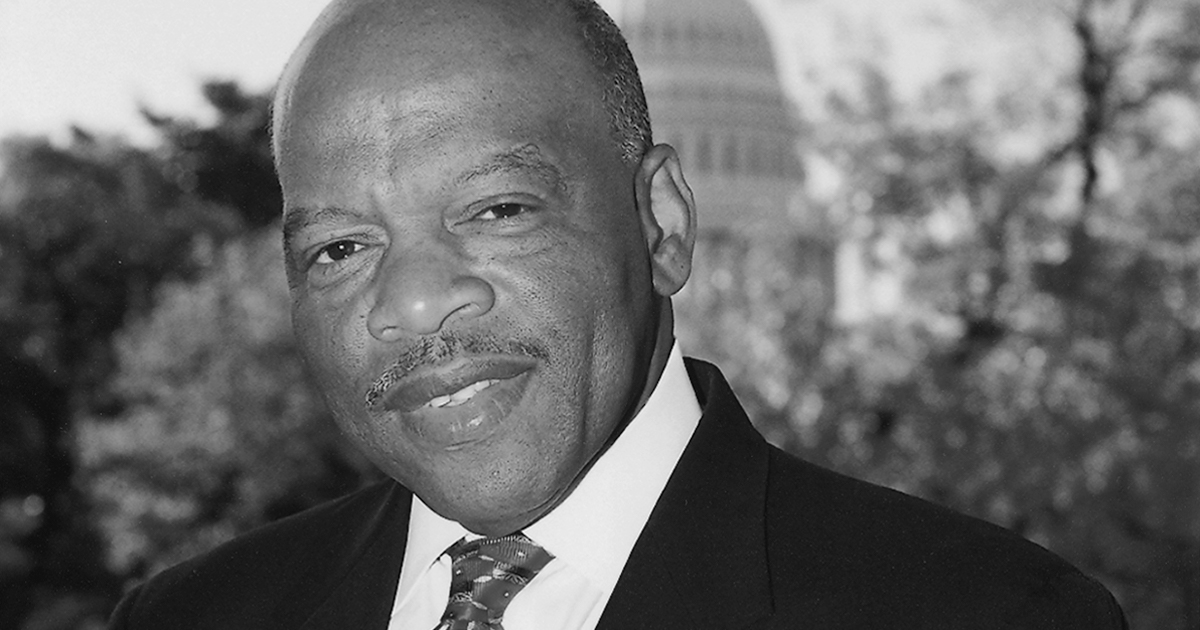 Congressman John Lewis passed away on Friday, July 17, 2020, leaving behind a legacy of fighting for equality and teaching younger generations about the Civil Rights movement through his graphic memoir series, March.

After his death, Lewis laid in state at the U.S. State Capitol, and his casket traveled by horse-drawn caisson over the Edmund Pettus Bridge—the Selma bridge he crossed in 1965 during a history-making protest demanding equal voting rights for Black people. Lewis is to be laid to rest in South-View Cemetery in Atlanta, Georgia, on Thursday, July 30.

Born Feb. 21, 1940, in rural Alabama, Lewis was one of 10 children, and grew up in a house without electricity or running water. He was inspired by the words of Dr. Martin Luther King Jr. and the activities of the Montgomery Bus Boycott in the mid-1950s, and Lewis became an active leader in desegregation protests while at the American Baptist Theological Seminary in Nashville. Lewis was arrested in 1960 while requesting lunch service at a whites-only lunch counter in Nashville—the first of more than 40 arrests, along with beatings at the hands of police and white vigilantes, absorbed while demanding equal rights for Black Americans.

Lewis frequently put his body in harm’s way in his dedication to equality and justice. He was beaten numerous times during the original Freedom Ride in 1961, in which seven white and six black activists rode buses through the south to show that the states were defying the U.S. Supreme Court’s rulings that segregation of interstate public transportation was unconstitutional. Lewis recalled during a CNN interview on the 40th anniversary of the first Freedom Ride: “The bus was burned in Anniston, Alabama. We were beaten in Birmingham, and later met by an angry mob in Montgomery, where I was hit in the head with a wooden crate. It was very violent. I thought I was going to die. I was left lying at the Greyhound bus station in Montgomery unconscious.”

Lewis become known as one of the “Big Six” in the Civil Rights movement, alongside Martin Luther King Jr., James Farmer, A. Philip Randolph, Roy Wilkins and Whitney Young. Together they organized the March on Washington in 1963.

In 1965, Lewis led the “Bloody Sunday” march in Selma, Alabama, where state police tear gassed the peaceful protestors and beat them with bullwhips and billy clubs.

Eight days after the march in Selma, President Johnson sent the Voting Rights Act to Congress. It was signed into law on August 6, 1965.

In the following decades, Lewis continued the fight for equal rights through his work with the Southern Regional Council and the Voter Education Project, and through his election to the Atlanta City Council. He successfully ran for a seat in the U.S. House of Representatives in 1986, and held that position until his death in 2020 at age 80.

In 2013, Lewis released the graphic novel March, the first of three graphic novels intended to educate younger readers about the Civil Rights movement shown through Lewis’ eyes. Co-written with Andrew Aydin and illustrated by Nate Powell, March detailed Lewis’ upbringing, his inspiration by Dr. King, his first sermon preached at age 15, and the lunch counter sit-ins in Nashville, including his first arrest. March 2 (2015) explored the Freedom Riders and the violent reactions across the South to their attempts to desegregate seating in buses, while March 3 (2016) spotlighted Lewis’ efforts to increase awareness across the country of racial injustice, culminating in the march in Selma. While each volume of March won numerous awards, March 3 claimed the National Book Award for Young People’s Literature, as well as the Coretta Scott King (Author) Book Award and the Michael L. Printz Award for excellence in literature written for young adults.

In 2011, President Obama awarded to Congressman Lewis the Presidential Medal of Freedom, the nation’s highest civilian honor, saying of Lewis, “Time and again, he faced down death so that all of us could share equally in the joys of life.”

In a much-quoted tweet from 2018, Lewis urged people to stay optimistic during this “struggle of a lifetime,” saying, “Never, ever be afraid to make some noise and get in good trouble, necessary trouble.”

Congressman John Lewis passed away on Friday, July 17, 2020, leaving behind a hard-won legacy of fighting for equality and of teaching younger generations about the Civil Rights movement through his graphic memoir series, March.