"The Unexpected Benefits of Writing a Deaf Character" by Emma Viskic 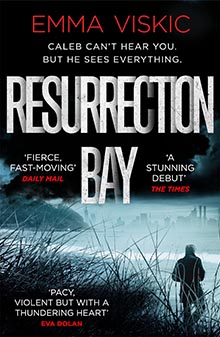 Emma Viskic is the author Resurrection Bay, a debut thriller from Australia. Australia has been a good source of great books lately, and Resurrection Bay is the latest in a line that has brought us, among others, The Dry and Only Killers and Thieves.

Resurrection Bay goes like this: Caleb Zelic's childhood friend has been brutally murdered in Melbourne, and Caleb vows to track down the killer. But there is one thing that separates Caleb from most of the rest of us--he is deaf.

Being deaf provides obvious difficulties, but it also provides opportunity. During his life, Caleb has becoming a student of body language; he can read people. If this sounds like a fascinating premise, you will be happy to know that the book is fast-paced and very well written. We asked the author to comment on what it was like to write a deaf character. Read ahead to find out what she had to say:

The Unexpected Benefits of Writing a Deaf Character

The hero of my debut crime novel, Resurrection Bay, was trouble right from the start. Caleb Zelic was everything I wanted in an investigator – funny, watchful, isolated and oh-so-stubborn, but he was also profoundly deaf. Although I loved Caleb, and thought he’d make an interesting protagonist, I was scared.

I’m a professional clarinet player; I’ve spent most of my life thinking about sound. Years performing in orchestras and operas, practising and perfecting nuances of tone. I even approach writing through sound, producing first drafts that read like scripts, with page after page of dialogue and only brief descriptions of place. Writing a deaf character felt too far from what I knew. And, more importantly, there are responsibilities that go with writing from outside your own experiences. Caleb isn’t a representative of the Deaf community, but getting it wrong could hurt people. I tried making him hearing, but it didn’t work: Caleb was deaf, and if I was going to write his story, I had to write him that way. So I decided not to write it.

I put the manuscript away and got on with other things. I wrote short stories and concentrated on life and work. But I couldn’t get Caleb out of my head. The seeds of his character had been growing for years. Some came from a profoundly deaf girl I’d gone to school with. I met her when I was ten, the age I first began to realize how different other people’s lives could be from mine, and I’ve been thinking about her ever since. But the inspiration for Caleb also came from much closer to home – my paternal grandparents. Baba and Dida were Croatian immigrants. They didn’t speak English, and I, in the way that was common to immigrant families at the time, wasn’t raised to speak Croatian. Their isolation, and our inability to communicate, loomed large in my life, so it’s probably not surprising that communication has been a major theme in all my writing. Or that I couldn’t get Caleb out of my head.

After a few months, I dragged Resurrection Bay out of the drawer to see what I’d written. Caleb was there, raring to go and waiting for the next scene. So I wrote it. By the time I’d finished I knew I was going to write Resurrection Bay. Decision made, I started writing in earnest, and also started researching. Research is a funny thing: it can smother your writing, or feed it. Good writing is about empathy, but it’s also about knowledge, and I knew I couldn’t accurately portray a deaf character without knowing more. I began by speaking to people in the D/deaf and hard-of-hearing communities, and read books and blogs. I learned the difference between being culturally Deaf, which Caleb isn’t, and being physically deaf, which he is. I decided that Caleb had become deaf as a child, that his natural abilities and stubbornness made him an excellent lipreader, and that, even with the help of hearing aids, he could only hear faint speech. But they were just facts – I needed to get inside Caleb’s head if I was going to create a real person.

I did an online lip reading course, then put earplugs in my ears and went to try my skills in the real world. Or lack of skills, as it turned out. I misunderstood people in shops and at bus stops, accidentally ordered cream in my black coffee, and got irritated responses from shopkeepers and waiters. I never became good at lip reading, but the more I learned, the more I understood Caleb and what drove him. I learned that his stubbornness would prevent him from asking for help, that he accepted his deafness but was prickly about other people’s reactions to it, and that, as good as his lip reading skills were, beards, accents and background noise would all thwart him. To my joy, I realised that other people’s speech would be incredibly important to him, so I got to indulge in my love of dialogue. My concerns that his deafness would be too central to the novel were also eased: although it’s an important part of him, it isn’t all he is.

My final decision was whether or not Caleb would use Australian sign language (Auslan). Although Caleb is determined to live in the hearing world, I was drawn to the idea of him signing, as well as lip reading. I went to school near the School for the Deaf, and shared a daily commute with a group of rapidly signing students. Their expressive communication seemed a world away from the hard slog of lip reading. I enrolled in an Auslan course still a little unsure if Caleb would use it, and knew within minutes that he had to. Auslan was exactly what I needed to show both Caleb’s softer side, and his closeness with people. So he speaks English most of the time, but signs with those he loves.

As I continued learning Auslan, I began to see how other people would communicate with Caleb. That his parents would insist on speech, but his beloved ex-wife would be a fluent signer. That his estranged brother would use English these days, only changing to Auslan as they grew closer. I even found a use for my own mistakes by giving them to Caleb’s spiky-tempered business partner, Frankie.

It took me five years to write Resurrection Bay, and I’ve just finished the second Caleb Zelic novel, And Fire Came Down. I’ve learned a lot along the way, including the unexpected benefits of writing a deaf character. While I’m naturally drawn to dialogue, Caleb is attuned to people’s physical responses. As well as reading their words, he has to watch their expressions, body language and interactions. In creating his character I’ve become more observant, too – a wonderful gift for my writing, and for me.