Ah, binge-reading. When you're focused only on flipping the next page, and then, hundreds of pages later, on picking up the next book.

These five romance series below range from four books to 56 books, and put the spotlight on the romantic troubles of first responders, millionaires, vampires, spies, and hackers...and the men who love them.

Search and Rescue series by Katie Ruggle – Ruggle's series-starter Hold Your Breath begins with a squad of first responders in Colorado practicing ice rescues in the midst of winter…and finding a headless corpse in the training lake. Each book in Search and Rescue follows one member of the team in a high-velocity and suspenseful novel, and I found them best read in order though it's not totally necessary. Ruggle brings a strong voice and interesting, off-the-grid plots to those who are looking for excitement in their reads. She just began a Rocky Mountain K9 series as well for those who think this series is not enough. (4 books)

Love in Bloom: The Bradens series by Melissa Foster – At the heart of Foster's series is the wealthy Braden family, who does everything from drive race cars to rescue sharks. Filled with deep emotion and passion, these stories aren't afraid to throw a lot of drama at their characters and put them through the wringer. (Better them than me!) Each book can be read as a standalone…but who wants to do that!? And Foster has additional Love in Bloom series focusing on other families--a very good thing should you decide that she's your newest favorite author. (10 books)

A Shade of Vampire series by Bella Forrest – You might think that the days of Twilight-inspired romances were long over, but think again. Forrest, who is also the author of the very popular Gender Game series, launched in 2012 this enormously ambitious and addictive series centered on the Shade, a sunless island ruled by vampires. If you are the type of reader who likes to have half your brain always in another world even when you're not reading, this 56-book-long and deeply immersive series is perfect for you. (56 books and counting) 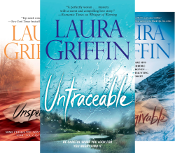 Tracers series by Laura Griffin – A group of highly skilled forensic scientists called the Tracers get called in to find missing persons and killers in Griffin's tense series. Aided by computer hackers and police detectives, those who make up the Tracers are sometimes the core of the story and sometimes less so, but you can always count on becoming jumpy at strange noises while you read these books. (12 books) 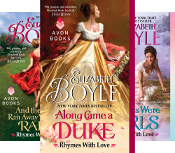 Rhymes with Love series by Elizabeth Boyle - Inspired by nursery rhymes, Boyle's Regency-set historical series feature women who know what they want and the men who are eventually persuaded to give it to them...along with their hearts. Smartly paced with hints of humor, these books are a nice match for those who read Eloisa James and Mary Balogh. (6 books)